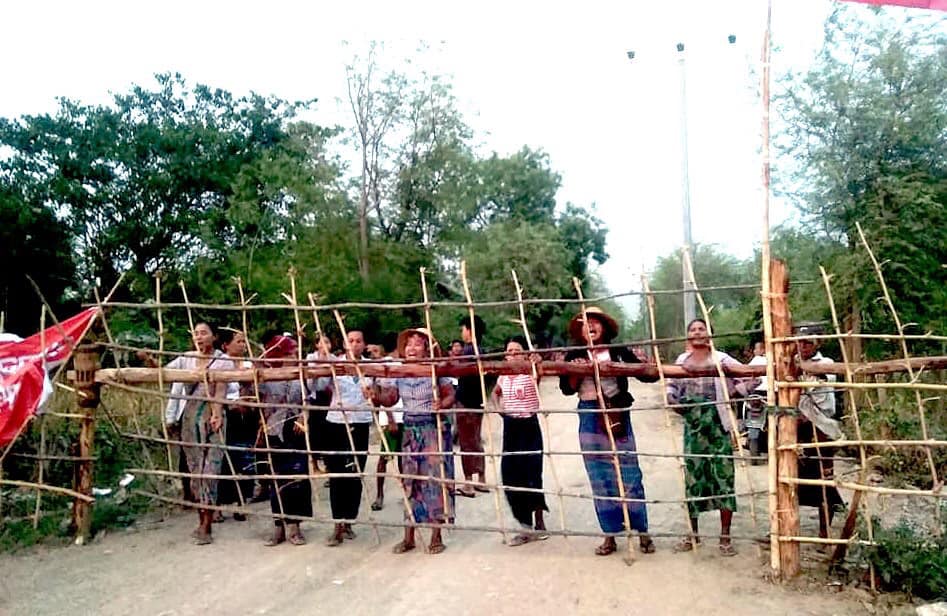 Numerous land grabbings have taken place in Burma. More than 50 percent of these have been carried out by the military and governmental departments. The rest have been committed by their lackeys and the foreign capitalists. Numerous peasant struggles have been taking place in Burma for their farmland, communal land and roads, and communal forests. Among those cases, the recent peasant protest in Aung Thbyae village in the Patheingyi township, Mandalay Region, deserves special mention.

Beginning on 14 May, 2019, the peasants in Aung Thbyae village have blocked their communal road against the crossing of the Myanmar Conch Company cars. The company is incorporated by Anhui Conch Co., Ltd. and the Myanmar Investment Group. Anhui Conch Co., Ltd. is the largest cement producer in China. It is owned by the Anhui Provincial People’s Government, trade unions and private shareholders. There had been previous instances of protests by villagers from Yanghcun, Guangdong in China; and residents of the five villages from Ulyanovskaya in Russia against the Anhui Conch Company, over concerns about the environmental impact of its activists, and its construction sites being too close to the villagers’ homes.

To build the coal-fired cement factory close to the Aung Thbyae village, Myanmar Conch has grabbed the communal lands, forests, wells and roads. The regional government, led by NLD Prime Minister Dr. Zaw Myint Maung, has been protecting the interests of domestic and foreign capitalists without considering the voices of the people. The villagers who had taken part in the protest have been arrested, charged on several counts, and face jail sentences of more than a year.

Class nature of the state

By looking at the rulers’ responses to the peasant struggles and workers’ strikes, it can be vividly illustrated whose class interest the rulers are protecting and which classes they are oppressing. The NLD government, led by petit-bourgeois opportunist Daw Aung San Su Kyi, dares not go against the interests of the military-bureaucratic capitalist class and the foreign imperialists.

As Lenin wrote in The State and Revolution, the state has arisen inevitably from the irreconcilability of class antagonisms, and is an instrument for the exploitation of the oppressed classes. There has been irreconcilable class antagonism between the military-bureaucratic capitalist class, their lackeys, foreign imperialists; and the people in Burma. The present state in Burma is merely an instrument for those classes to oppress the majority of the people: the workers and farmers. 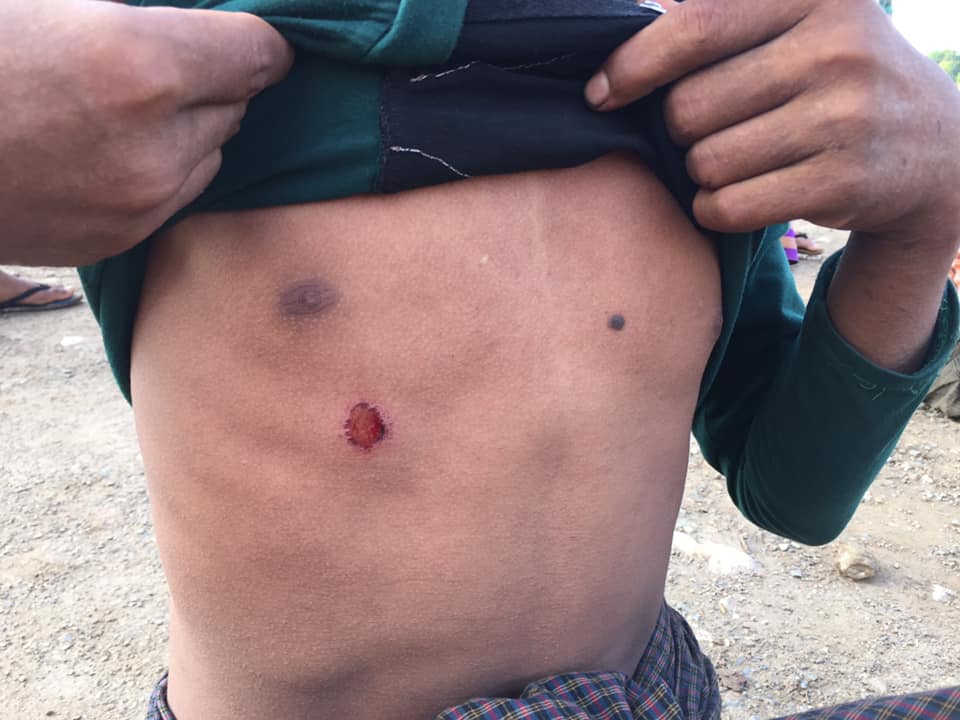 The police responded to the peasant protests with teargas and rubber bullets. Now the peasants are fighting back / Image: SDUF

When the Aung Thbyae villagers launched the blocking protest on their communal road, the villagers from nearby villages such as Thayet Kaing, Waiponla, and Myakanthar came to show their solidarity. More than 3,000 acres of their farmlands had been grabbed by the military dictators and the Myanmar Conch Company as well. In response, around 300 armed police the (the ruling class’ armed bodies of men), came to threaten and surround the villagers. It is encouraging to see the bravery of the peasants in the face of threats by the police chief and the township’s administration.

The peasants kept up their struggle to stop the construction of the coal-powered cement plant, to win the unconditional release the arrested villagers, and to close all judiciary cases against them. The NLD government, which is hiding the interests of the ruling class under the shell of democracy, could not pretend to be a neutral arbiter when the peasants were shaking the economic foundations of bourgeois rule. In the early morning of 15 May, the police fired rubber bullets and tear gas at the peasants. 17 people were injured and five villagers were arrested.

Though the peasants have not read the teachings of Lenin, they know very well through their experiences of passing through interminable bureaucratic procedures in a failing attempt to obtain their right to hold land, that the state is a special coercive force for the suppression of one class by another.

Thus, when the police took the violent action, the peasants fought back with rods and catapults. By throwing heavy stones to block part of the road between the policemen and the villagers, the peasant women deterred their advance. At the same time, some young women prepared oil in the empty drinking bottles and distributed them to the peasant men. Then, the peasant men went to the cement factory and set fire to the construction site.

This is the first violent action taken by the peasants in Burma’s present age. Previous peasant protests had utilised peaceful methods, but the ruling class suppressed every such protest by using the police, the army, or paramilitary forces like Swam-Arr-Shin, patronised by the former junta. Now, the peasants in Burma have learned they can counter the coercive measures of the ruling class only by using force themselves. But the Aung Thbyae peasants have now had to retreat in their village, and are surrounded by the police, since these protests are still confined to the small region. 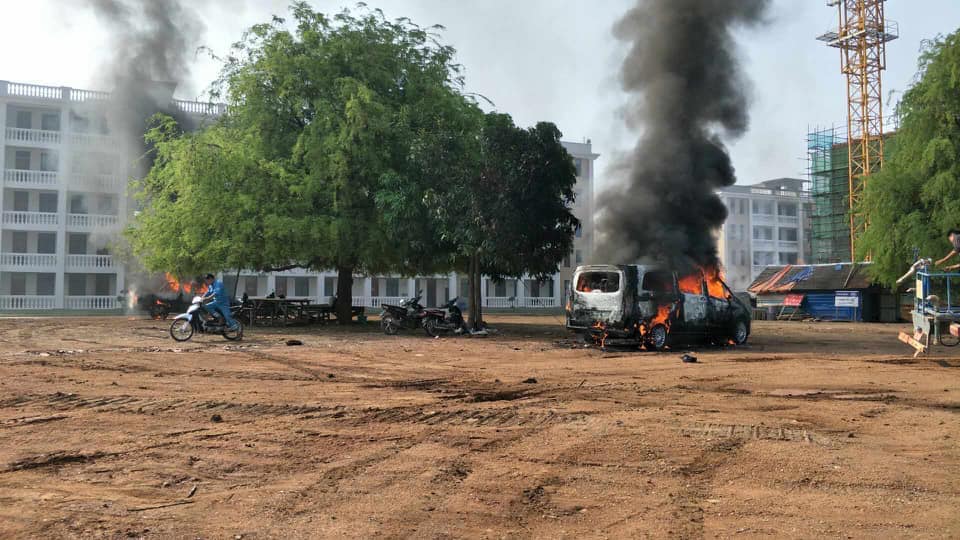 The acts of self-defence in Aung Thbyae against the police and Anhui Conch Co. (whose cement factory construction site was set alight) are the first non-peaceful protest actions by the peasantry in Burma's modern era / Image: SDUF

After the police force surrounded the village, the bureaucrats have started taking actions to charge many villagers on a number of different counts. The peasant leaders could not go out of the village. Every villager has to be alert, day and night, to activities of the police, who could enter the village to arrest them at any time. Some policemen are protecting the company cars and the construction site.

Also, the Patriotic Association of Myanmar or MaBaTha (Association for the Protection of Race and Religion) led by bloodthirsty, racist monk Wirathu, came to the village, pretending to help the peasants and giving them money. But the peasants and their leaders refused to receive his money and gave it back. That shows the sharp development of their political consciousness, as they have no intention of letting their class struggle be dirtied by these reactionary charlatans. They also refused to take money and food from organisations supported by the western capitalist governments or NGOs.

The peasants in Aung Thbyae village are under the leadership of Marxist-Leninst Party, Social Democratic United Front (SDUF). The SDUF is financially independent from western capitalist governments or NGOs, the military-bureaucratic capitalists and their toadies. The SDUF collects funds from monthly membership fees and some private donations. Though its financial strength is weak, SDUF members are standing squarely with the peasants and workers, sharing the same food, drink and shelter as them.

Since there is a strong link between the interests of the military-bureaucratic capitalists and their lackeys, and Chinese state-owned companies like the Anhui Conch Company, Aung Thbyae peasants and the SDUF need revolutionary support from comrades around the world. International solidarity is necessary to keep waging the class struggle against the military-bureaucratic capitalist state and the Chinese government’s capitalist imperialist policies in Burma.

Workers of all lands, unite!