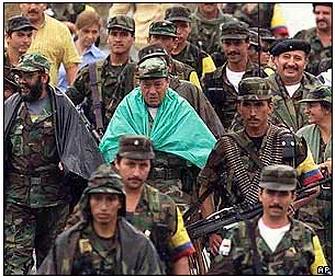 The death of Manuel Marulanda, the legendary leader of the Revolutionary Armed Forces of Colombia (FARC), reopens a debate over the perspectives for the FARC and for the class struggle in Colombia. In recent months the FARC has received hard blows with the assassination of two of its principal leaders, Raul Reyes and Ivan Rios, numbers 2 and 4 respectively in the leadership of the organisation. Nevertheless, the FARC still control a good part of Colombian territory (mainly in the jungles) and maintain an active presence with more than 15,000 combatants.

The persistence of the FARC over four decades is rooted in very profound social and economic causes: the backwardness of the country, the concentration of the land in the hands of the landowners, the oppression of the poor peasants and the workers and the ills generated by a decadent capitalism: drugs, poverty, misery, etc.

Colombia has become the principal bulwark of US imperialism in South America. At the head of the country is a reactionary psychopath Álvaro Uribe, firmly supported by the landowning and industrial oligarchy and with strong ties to paramilitary groups which in the last 15 years have assassinated more than 4,000 trade unionists and popular leaders.

The origin of the armed conflict in Colombia

The FARC was born in 1964, but its history goes back to 1948 when Jorge Eliécer Gaitán, Presidential candidate and leader of the left wing of the Liberal Party was assassinated. This assassination provoked an insurrectionary outburst of the peasant masses and lead to the emergence of the first Colombian guerrillas. 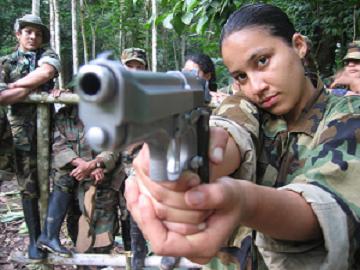 The FARC has historic ties with the Communist Party of Colombia. Under Stalinist influence, the PCC defended reformist and nationalist positions, substituting the struggle for socialism with an impossible accord with a non-existent "progressive" bourgeois. This way lead to a dead end. Hence the FARC in its 45 years of existence has not set the objective of socialism, but "to pressure" the Colombian bourgeois to sit down to negotiate and accept an agrarian reform and other democratic demands. But the expropriation of the landowners is indissolubly linked to the expropriation of the capitalists and bankers in the cities, because all of these form one and the same class. You can't separate agrarian reform from the struggle for Socialism.

Therefore, all of the negotiations between the FARC and successive governments have ended in failure. Thus when in the 1980s the FARC declared a ceasefire and organised a legal party, the Unión Patriótica, to explore the parliamentary road, the ruling class responded by assassinating more than 3,000 militants including three presidential candidates using the police and the paramilitaries.

The Tactic of Uribe

It may come as a surprise that a reactionary rabble-rouser like Uribe could win two consecutive presidential elections. However, on the last occasion in 2006, 60% abstained. Colombia has a semi dictatorial regime and functions as a military camp for the USA with the excuse of the "war against drug traffic". Hence electoral fraud is present in many areas. What was really striking was the great performance of the left coalition, the Democratic Pole (based on the old Communist Party), that came second with 22% of the votes and that has held the Mayor's office in Bogotá since 2003.

Nor can the great tirdeness in the population be ignored, after decades of guerrilla struggle which have not lead to a decisive result. To this must be added that in their desperation to achieve practical results the FARC resorted to indiscriminate attacks and to tactics of mass kidnappings that have been used by the bourgeois and by imperialism to win the support of the middle classes and politically backward sections of the workers and peasants for their policy of the "strong hand".

In spite of everything in recent years a revitalisation of the workers and popular struggle in Colombia can be clearly seen. There have been several general strikes, as well as massive mobilisations against the signing of the Free Trade Agreement with the USA. Also, there have been marches of the indigenous people and peasants and student struggles in the university. The working class, in spite of all the blows it has received has demonstrated a great level of combativity and organisation.

Uribe, under the pressure of the USA, has boycotted one or more times the offer to surrender the hostages of the FARC and has dynamited every possibility of a peace accord as has also been demonstrated with the assassination of Raul Reyes in Ecuadorian territory.

Faced with a workers' movement on the rise and the emergence of a political alternative on the left, the Colombian bourgeois has an interest in keeping alive "the guerrilla problem" to justify before the population the restriction of their democratic rights, indiscriminate detentions and the assassination of popular leaders.

What's more, the maintenance of an internal "war front" has permitted Colombia and the USA to justify the increasing militarization of Colombia with the perspective of launching a war against Venezuela as the last card, with the intent of defeating the government of Chavez, destroying the Venezuelan revolution and stopping it from spreading to the rest of Latin America.

The revolutionary centre must be in the cities

The limits of the guerrilla struggle are clear in Colombia. Over 40 years the battlefront has remained relatively stable and another 40 years could pass without any fundamental change. Even in a country with a numerous peasantry like Colombia, the vital hubs of society are not anchored in the countryside, but in the cities. It's here that the economic and political centres and the principle transport hubs of the country can be found.

No regime would be able to stay on its feet in the face of a revolutionary general strike which would paralyse the country, starting in the cities, not for a month, but even just for a single week and where the masses of workers occupied the countryside and the factories, the offices and the official centres and organised their own organs of power. It is towards this perspective that the main energies of the revolutionary cadres should be orientated.

Should they then dissolve the FARC? Not at all! The FARC can and must play a very useful role, but acting to complement the struggle in the cities, making itself available to workers and peasant communities, to help train and arm the committees of workers and peasants who have the task of confronting the hired assassins of the employers and the paramilitaries.

The Colombian revolution must combine the armed struggle in the countryside with an insurrectionary movement of the masses in the cities, lead by the working class and by a revolutionary party rooted in the masses. But we insist, the FARC must act as an element of support and not as the central pivot of the revolutionary struggle.

The adjustment policies of Uribe and the signing of the Free Trade Agreement with the US that further weaken the Colombian economy, as the general crisis of capitalism develops, will result in a stormy awakening of the class struggle in Colombia, which cannot be stopped by the actions of the paramilitaries or the army.

On the basis of the experience and the effects of the revolutionary movements just across the border in Venezuela and Ecuador, the working class and the poor peasants will rise to their historic tasks in the struggle for socialism.

Read the original in Spanish.