Share
Tweet
On July 9th tens of thousands of workers and peasants took to the streets in Peru as part a national strike. The strike had been called to protest against the right wing economic policies of the government of Alan García. 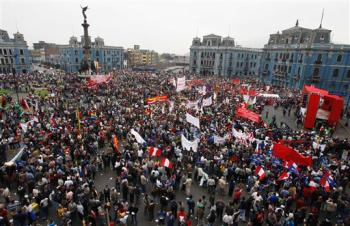 On July 9th tens of thousands of workers and peasants took to the streets in Peru as part a national strike. The strike had been called to protest against the right wing economic policies of the government of Alan García. Despite a six-year long economic boom (with the economy growing at 9% in 2007), about 50% of the population still live below the poverty line and the policies of the García government have only benefited the multinational companies which are grabbing the country's natural resources, mainly in mining. The strike was also called to protest the high cost of living and the harsh repression used by the government and the authorities against a whole series of mass movements that have rocked the country in the last few months.

Also participating in the strike were the peasant organisations which had called a 48-hour strike protesting against a new decree which would allow the selling-off of peasant and indigenous land which is communally owned. This decree is supposed to bring the country's legislation into line with the recently signed Free Trade Agreement with the USA. In the Amazonian region the strike was a three-day protest with mass demonstrations against a new law that allows the exploitation of large parts of the Amazonian rain forest by logging companies.

In the south and the centre of the country, where the rate of approval of Alan García stands at barely 10%, the strike movement was strongest. These are the regions that witnessed the mass insurrections against the privatisation of electricity in 2002 and where Regional Defence Fronts have been set up by the trade unions and peasant organisations. 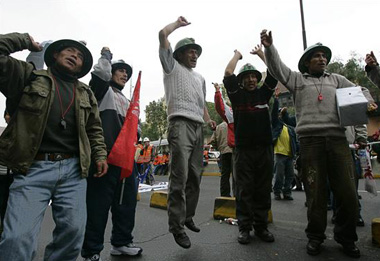 20,000 workers marched in the capital Lima, including sectors like transport, teachers, university workers and students, construction workers ad others. Tens of thousands marched in Piura and Trujillo in the north and similar demonstrations were seen in the most important cities throughout the country. 15,000 also marched in Huancayo (Junín).

Unfortunately, the political demands of this extraordinary movement were very limited. The leaders of the CGTP trade union said that this was just the first round, and that the movement would continue with the calling of a National Peoples' Assembly ... in November! This allowed Alan García to declare that the strike had been a failure and that he would not respond to the "undemocratic" demands of the people, who just wanted to "overthrow democracy, following orders from Bolivia and Venezuela".

This shows the weakness of the leadership. In discussions during the preparation of the strike, the leaders of the CGTP and the Communist Party insisted that there no conditions existed for raising the demand "Down with García" which the Marxists of the Fuerza de Izquierda Socialista were advocating. This could not be further from the truth. Peru has lived through a very convulsive period since the overthrow of the Fujimori dictatorship by the masses in 2000. The Toledo government before Alan García was only elected on the basis of promising a programme of reforms and concessions to the masses, playing on the fact that he "was an Indian". But these llusions quickly vanished and we saw mass movements which reached insurrectionary proportions in the south of the country.

Then García came to power in a very close race in an election which many suspect was rigged, and again, he only succeeded in getting elected on the basis, of distancing himself from the "neo-liberal" policies of his predecessor. Soon after his election, strikes and mass demonstrations started up again, his popularity plummeted, and he had to resort to harsh repression to stay in power. 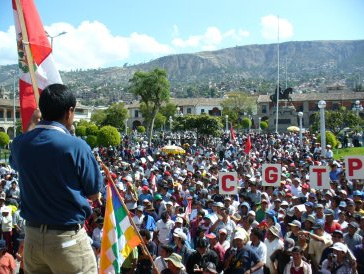 An indication of the explosive situation of the class struggle in Peru is the recent movement in Moquegua. In June, the people in this southern mineral-rich region started a protest movement to demand that a bigger share of mining revenues should stay in the region, which has a high rate of poverty despite the wealth of its soil. These demonstrations, which mobilized tens of thousands, were faced with severe repression on the part of the police.

This was the spark that lit the present conflagration. Workers, miners, peasants, women and youth, united as one, armed themselves and stormed the police stations, taking police officers hostage. Faced with a regional uprising which threatened to spread to neighbouring regions, the government had to make concessions and the head of police and 60 police officers were forced to kneel down and apologise in front of a demonstration of tens of thousands.

This is a concrete indication of the mood in the country and the readiness of the masses to strike and even to victoriously confront state repression, when even half a lead is given. It is quite likely that the masses will not wait until November to take further action. The stage is set for revolutionary events in Peru.

Video of press conference by Mario Huaman, general secretary of CGTP, with pictures of the strike