Political debates, solidarity with the anti-fascist movement in the Ukraine, singing of workers songs, sports and a special political quiz - that was this year's international Pfingstseminar,  organized by the Austrian Marxist journal Der Funke.

More than 85 participants joined the seminar in the Mühl-fun-viertel in Klaffer/Hochficht (Upper Austria). This year marked the 20th time the Pfingstseminar had taken place. Unfortunately comrades from Bosnia, Serbia and the Czech Republic were prevented from attending shortly before the eevnt. In spite of this the seminar had a clear internationalist character with guests from Germany, Switzerland and Spain. One of the political highlights was the plenary on Saturday evening, where Jorge Martin from the editorial board of In Defence of Marxism (www.marxist.com) spoke about the developments in the Ukraine and the threatening of revolutionary activists by fascist gangs. In his speech he showed the reactionary character of the government in Kiev, headed by the oligarch Poroshenko, in which fascists play a key role. 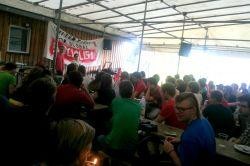 He also described the protest movement in Donbass against the new government, which fundamentally has a social and democratic character and cannot be labelled simply as "pro-Russian separatism", as mainstream bourgeois media call it. The barbaric violence against leftists, communists and anti fascists, including the massacre in Odessa and the continued harassment, for example, of comrades of the Marxist organization Borotba, is a signal for us to provide active solidarity with our comrades in Ukraine. Everyone is agreed that we want to organize anti-fascist solidarity work in Austria, Germany and Switzerland.

Over the weekend there were also 16 workshops on various topics, from the Marxist theory of crisis and the application of Dialectical Materialism in physics, to Marxist factory and trade union work, and the national question.

In order to try to establish a relationship between theory and practice several workshops also discussed the practical work that we do in workplaces and the trade unions. Also the role of leftists within and outside of social democracy was discussed in detail. So it was particularly pleasing that leading comrades of the Socialist Youth were also present at the Seminar. After the regional secretary for Socialist Youth Upper Austria, Manuel Stolz, and the regional chairman, Fiona Kaiser, had arrived on Saturday, we also welcomed Julia Herr, the new leader of the Socialist Youth, on Sunday afternoon.

In 2014, the Socialist Youth movement celebrates its 120th year in existence. Thus we invited Julia to discuss the future work of the SY. Julia has stated that she wants to lead the SY as an anti-capitalist and anti-fascist organisation and as a driving force of the Left within Social Democracy against the grand coalition. These are all intentions which we will fully support.

Although many points for further discussion were raised about the concrete path to achieve these necessary aims, we are confident that we can move things forward by debating these issues jointly and democratically. The question of the prospects of the Left was a thread which ran through many workshops and also the discussions afterwards. It is clear that much is already things are developing within the Socialist Party. As we saw with the election of Julia Herr as the leader of the Socialist Youth, the need for a political alternative to the Austrian Socialist Party leadership’s policy of permanent subordination to the needs of capital is starting to express itself in an organised manner.

An absolute highlight of the seminar was the singing of workers songs with Gigs Buchinger, who led us through the history of revolutionary movements on guitar. In the course of the concert, the barrier between the musician and the audience was broken as the whole room joined in. Later, Comrade Miguel took over the guitar and microphone and also played revolutionary songs from Spain and Latin America.

The last evening was dominated by a humor filled political quiz followed by drinks and a social. The mix of high level political discussions, leisure and active solidarity has made an impression on all participants and especially on those attending their first Pfingstseminar.