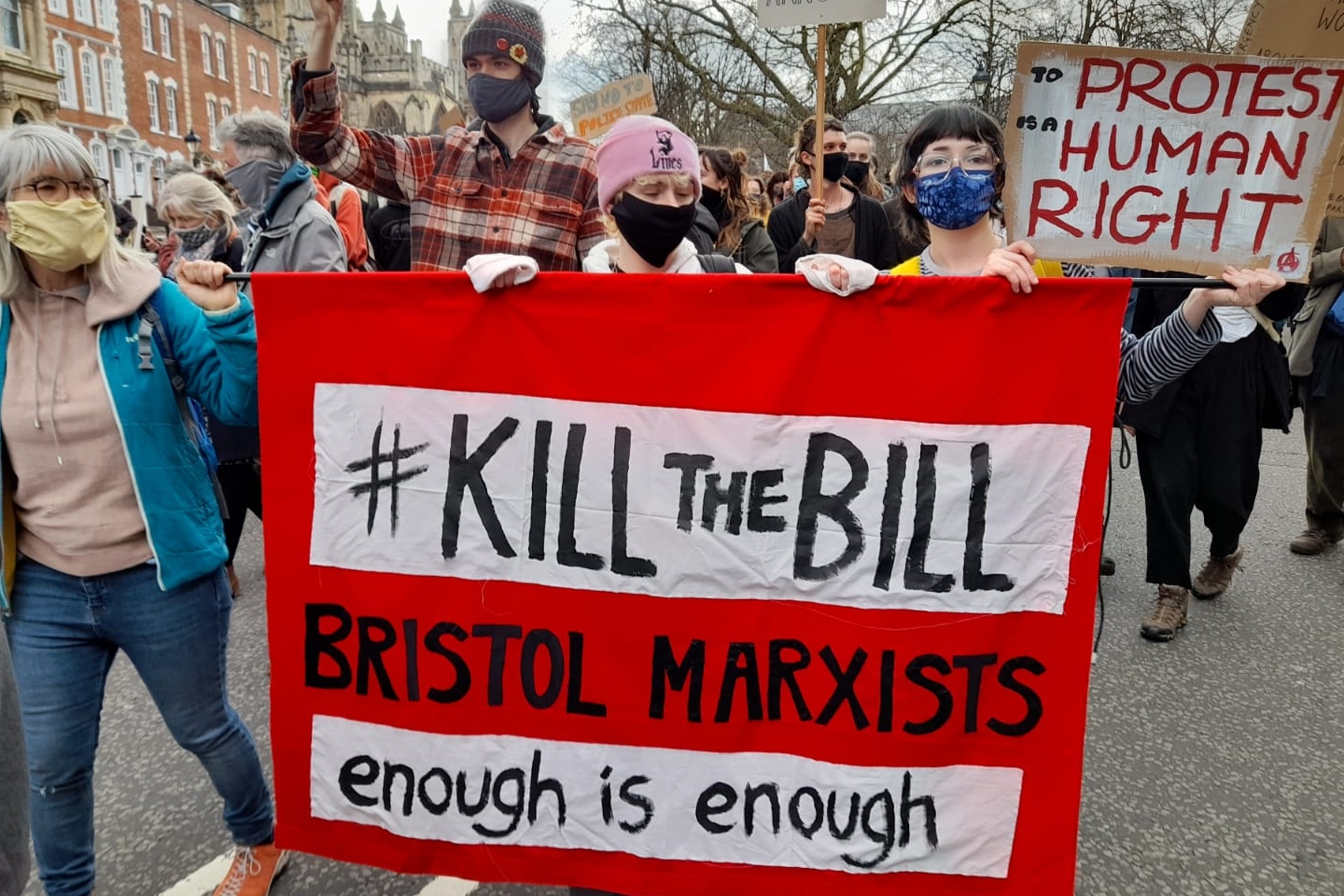 A new law being proposed by the Tories – that would give police unprecedented repressive powers – has led to a wave of anger and demonstrations. In Bristol last weekend, police provoked a peaceful protest of 5,000 into a furious riot. This anger towards the police came on the back of their brutal suppression of a peaceful vigil in London, in memory of Sarah Everard, allegedly killed by a police officer two weeks ago.

The establishment is up in arms about the ‘kill the bill’ demonstration in Bristol on Sunday, which ended with violent clashes with the police.

But the real thugs are to be found in the establishment: those that defend a system that condemns millions to poverty, for the sake of the riches of a few. 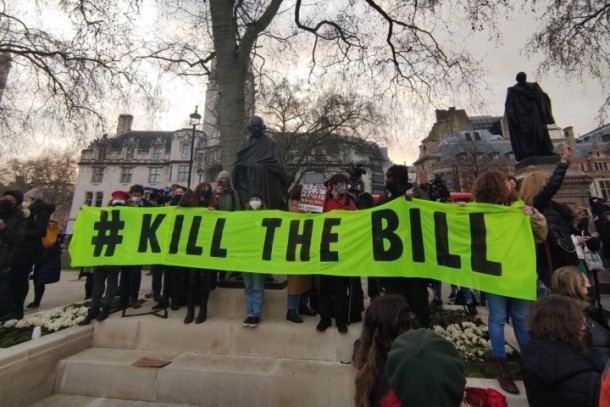 'Kill the bill’ demonstrations were organised across Britain at the weekend against the Tories’ new law on protests. Nowhere were they as dramatic as in Bristol / Image: Socialist Appeal

‘Kill the bill’ demonstrations were organised across Britain at the weekend against the Tories’ new law on protests. The Police, Crime, Sentencing and Courts bill, will give police draconian powers to stop peaceful protests that they deem ‘noisy’, or a ‘disruption to the public’. This would mean the right to protest would no longer exist, as the police could clamp down on any public gathering.

This attack by the Tories on our basic democratic rights was simply the tip of the iceberg for those coming out to protest. It is no coincidence that only a week before, police in London violently crushed a peaceful vigil to mourn the death of Sarah Everard – who was seemingly killed at the hands of a serving police officer.

Anger against the police has been brewing for years, or indeed decades. Millions are fed up at the everyday racist harassment of black and Asian youth, as highlighted by the Black Lives Matter movement – with protests in Bristol last summer that famously ended with the toppling of the statue of slave owner Edward Colston.

Despite countless inquiries and investigations, black men continue to die at the hands of the police, whilst those responsible rarely – if ever – face justice. The recent death of Mohamud Hassan, shortly after leaving police custody, appears to be simply the latest in a long line of such cases.

Women who suffer sexual assault and rape are routinely ignored by the police. And now, with the new laws enacted by the Tories, those found guilty of the ‘crime’ of toppling statues of racists can face prison sentences of up to 10 years – six years more than convicted rapists! 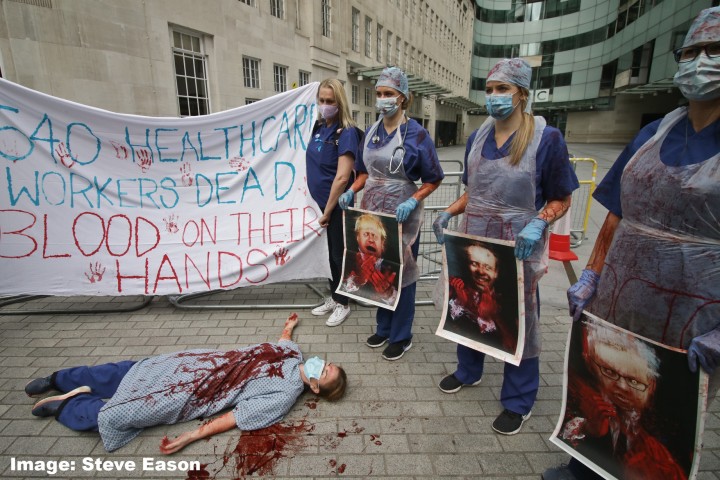 The hypocritical response by the Tories and their establishment lapdogs is to be expected / Image: Steve Eason

Of course, according to the establishment, none of this is ‘thuggery’, but simply the workings of ‘law and order’.

As to ‘disorder’ and ‘criminality’, the Tories themselves are world experts, with their catastrophic handling of the pandemic.

Lest we forget, the Tory government is responsible for the deaths of almost 150,000 people from COVID, as the profits of the bosses are prioritised over people’s lives. Young people especially face an extremely bleak future, with unemployment set to skyrocket. And at the same time, the Tories’ rich chums have been handed billions of pounds in the form of corrupt contracts and state handouts.

Is it therefore any surprise that thousands have reached the point where they feel ‘enough is enough’? And that this accumulated anger should explode as a result of provocations from the police?

Even before the demonstration, the message from the Bristol authorities had been: ‘Don’t come, don’t protest – the police have ruled against it.’ With the threat of hefty fines, the authorities made it impossible to organise a disciplined march.

It is indicative of the mood, that despite these warnings, more than 5,000 in Bristol took the decision to take a political stand against the bill, and the whole rotten establishment.

From the outset, pairs of police officers approached protestors, commenting on messages critical of Priti Patel. Those holding banners were warned that they were ‘illegal’. The police presence melted back to some degree, as the number of protestors grew. But there was a looming sense that they were prepared to intervene more aggressively.

The crowd moved off from College Green, on an impromptu march through the city centre. Numbers inevitably dwindled as the hours rolled by, but a group – perhaps a thousand strong – made a sit-down protest in front of the Bridewell police station.

In response, riot police came out with mounted units and dogs. They soon began to beat protesters with batons. There are reports of the police using pepper spray, escalating what had been a peaceful march into a pitched street battle.

The violence, goaded out of some protesters by these attacks, has of course become the focus of the day for establishment. Immediately they are using these events to try and justify granting the new repressive powers to the police. They continue to kick an angry dog, and then cry for a tighter collar when it starts to growl back!

I was a teenager in 2010 when I saw police on horses charge at school students, after driving a van into the road for protesters to attack and journalists to photograph. Children became "rioters". Last night they did the same in Bristol. Our heroic media will again be pliant.

As Marxists, we do not join in this hypocritical chorus of denunciation. Ultimately, it is capitalism and all its institutions – including the Tories and the police – that are responsible for violence on a systemic scale.

At the same time, however, we must point out that smashing a few police windows will not bring us any closer to ending this rotten, oppressive system. This can only be achieved by an organised struggle of the working class, based around a socialist programme to transform society.

At present, the tops of the trade unions and the Labour Party are holding this struggle back. Just imagine how powerful the movement would be if the leaders of the labour movement mobilised and organised their ranks. And likewise, if ‘Sir’ Keir Starmer channelled the enormous anger of millions against the establishment, rather than falling over himself to prop it up.

Rather than a few thousand coming out to protest in a handful of cities, we could see a mass movement of millions of workers and youth. Faced with this, no amount of repressive Tory laws could hold back the struggle.

Workers and youth can have no confidence in Keir Starmer – or any of the establishment’s agents in the labour movement – to lead this movement. It is therefore vital that the left seizes the moment to flush out those holding us back, and transform the unions and Labour Party into vehicles for struggle.

At the end of the day, the police and the Tories serve to defend the interests of the ruling class. Only with a determined class struggle, taking power out of the hands of the billionaires and their agents, will we see an end to all the horrors and violence of this system.