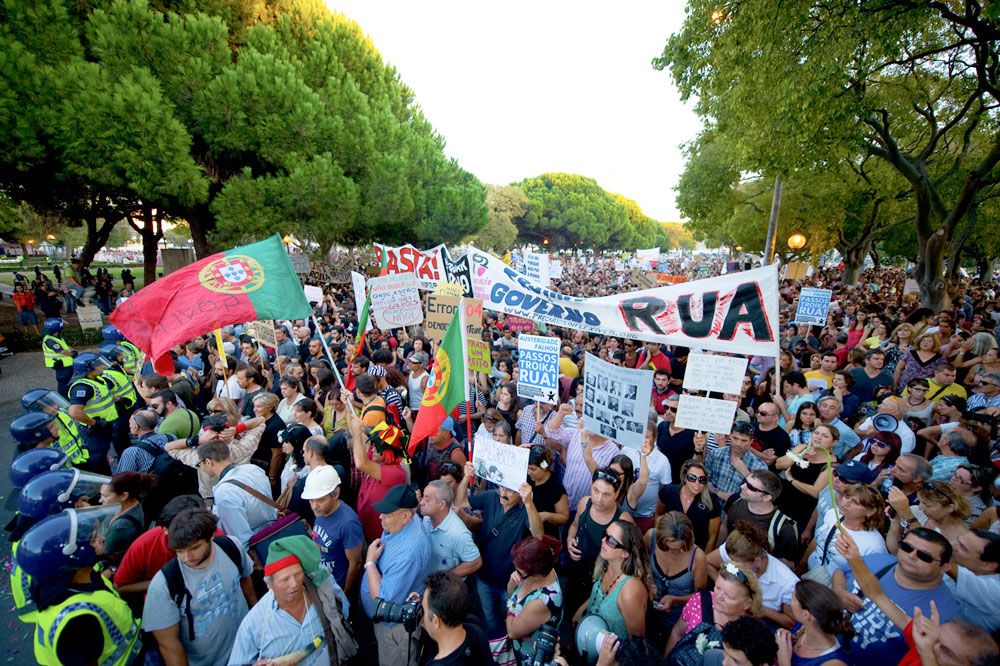 Faced with unprecedented protests, the Portuguese government has been forced to withdraw the announced increase in workers' social security contributions. This is a victory for the movement of the Portuguese workers and people, but only a very temporary one.

The huge demonstrations on September 15, one million people in Lisbon and mass demonstrations in another 40 towns and cities, had been organised from below and were a faithful reflection of the wrath of the Portuguese working people against two years of a constant barrage of attacks against their living standards. The immediate spark for the movement, which was the largest since the 1974 revolution, was the attempt of the government to increase workers' social security contributions (TSU) from 11% to 18% and cut bosses’ contributions from 23.75% to 18%. Now the government has been forced to scrap this proposal.

The September 15 demonstration created a political crisis which affected the ruling right-wing coalition. In effect, the legitimacy of this government was put into question by the movement in the streets. All the pressure was now concentrated in the meeting of the Council of State, a body which is only used in extreme circumstances, which was convened on Friday, 21. The movement called for a massive picket outside of the meeting. For the 8 hours it lasted, tens of thousands of people came out to show their anger and opposition. It was no longer a case of a protest against the TSU modification, the main demand was for the resignation of the government. The main slogans reflected this clearly: “O povo tem voz, o conselho somos nós” ["the people has a voice, the council is us"], “eles são meia dúzia, nós somos milhões” ["they are half a dozen, we are millions"], “o povo unido jamais será vencido” ["the people united, will never be defeated"], “Aqui Portugal, ali o capital” ["here Portugal, over there Capital"].

Clearly, the Prime Minister Passos Coelho had no alternative but to either retreat on this particular issue of the TSU or resign. For now it has survived, but the government is already dead and sooner or later will have to give way to some sort of technocratic or national salvation government. The point is that now it will have to find from somewhere else the money that it expected to raise from the modification of the TSU. The government has put the ball in the court of trade union and business leaders calling a "social pact" meeting on Monday, September 24, to listen to their alternative proposals. One way or another the same amount of cuts will have to be introduced, either by raising indirect taxation, further cuts in wages or a combination of both. The government, if it wants to survive, will be forced to present these new alternative cuts as being "agreed with the social partners" and as being "fairer" than the TSU reform. But it has very little room for manoeuvre.

This government, which won about 50% of the votes and 57% of members of parliament in June 2011, is now thoroughly discredited, and the Portuguese ruling class is busy trying to find an alternative to continue the implementation of the austerity cuts which are necessary from the point of view of the capitalists. The workers and the people now feel emboldened. They have achieved a victory, even if it is only partial and will be short-lived. But the feeling is that the struggle pays, that mass mobilisation can force the government to back down. If the unions, particularly the powerful CGTP, were to call a general strike now as part of a sustained campaign of mobilisation with the aim of bringing down the government, Passos Coelho’s days as prime minister would be numbered.

That would then pose the question of: what is the alternative? The only two parties that have consistently opposed the austerity cuts are the Communist Party and the Bloco de Esquerda. They should form a united front based on clear socialist policies. So far, the leaders of both parties have come short of identifying the root cause of the current crisis: the existence of the capitalist system itself. Their lack of clarity has limited their appeal.

The mood in Portugal is one where the masses of the people are questioning not only the economic measures as such, but also the legitimacy of the institutions that are carrying them out. These are all symptoms of a revolutionary crisis which is developing in society as a result of the impact of the crisis of capitalism.