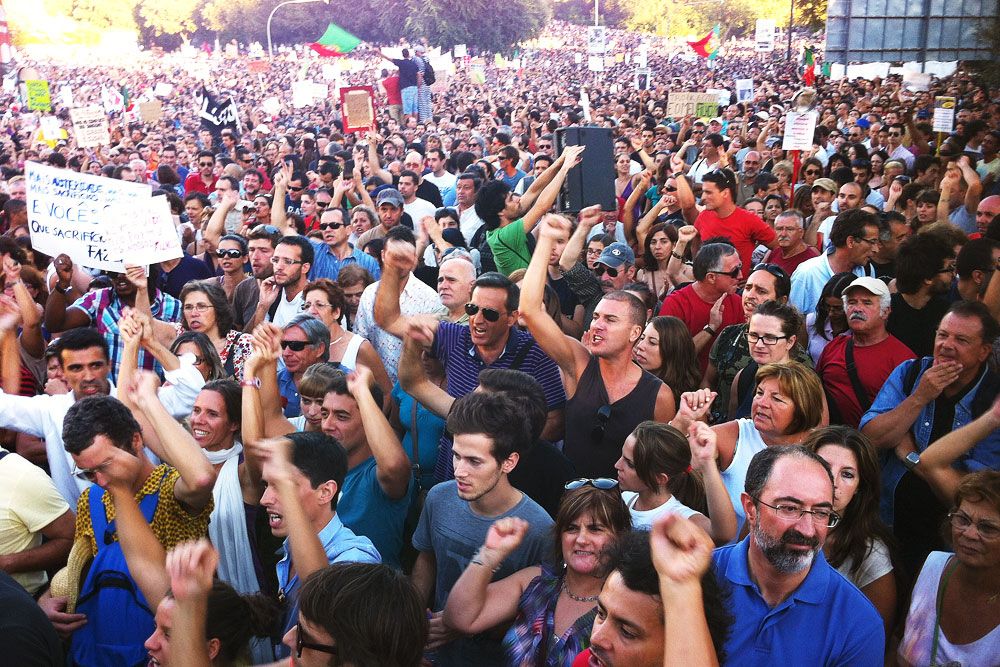 The biggest demonstration in Portugal's history or, according to other estimates, the largest since one million people gathered in the streets of Lisbon on May 1st 1974 during the revolution. A huge human tide of hundreds of thousands of people, a million in total, came out on the streets of 40 cities and towns all over the country and overseas territories on Saturday, September 15. This was the response of the Portuguese people to the latest austerity package announced by the right wing government of Passos Coelho on September 7.

The demonstration had been called from below, through an initiative on social media which started immediately after the prime minister announced an increase in employee contributions to social security (TSU) from 11 to 18% while at the same time reducing employer contributions from 23.75% to 18%. In effect all workers will lose the equivalent of one monthly wage a year, while pensioners and civil servants earning over 1,100 euro will also lose one of their two annual bonuses equivalent to another month's wage.

By announcing simultaneously an increase in employee contributions and a cut in employer contributions, in effect the government is transferring 2.3 billion euro directly from the pockets of the workers to the bank accounts of their bosses. This is yet another brutal attack on the conditions of working people which comes after nearly 18 months of austerity cuts since the bail out of Portugal in April 2011.The Portuguese people have already endured an increase in VAT to 23%, an increase in income tax, new fees for healthcare services (5 euro for a doctor's appointment, 20 euro for emergency treatment), an increase in public transport prices, cuts in health and education spending, etc.

These measures have not even achieved their stated aims: to reduce the budget deficit. As was to be expected, and as has happened in Greece, the brutal austerity packages imposed by the troika in exchange for the 78 billion euro bail out, have worsened the economic recession, increased unemployment, reduced private consumption (-6%) and investment, therefore making it physically impossible to achieve the deficit reduction targets. The Portuguese economy is in fact expected to contract by 3% this year (after a fall of 1.6% in 2011) and a further 1% in 2013. Official unemployment has nearly doubled from 8.2% in April 2008 to 15.7% in July and is expected to reach 17% next year. 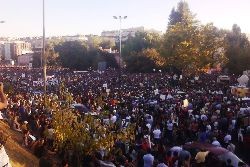 Photo: Joao Vasco AlmeidaThe right-wing government of Passos Coelho attempted to outdo the troika in its implementation of cuts and "adjustments" and wanted to appear as the obedient pupil of the European authorities, distancing itself from the “unreliable Greeks”. None of this has worked, however. It has now had to recognise that the target of bringing the deficit down to 4.5% in 2012 is impossible to achieve (the deficit will reach almost 6% of GDP by the end of the year) and it will have to be delayed until 2013, with the final target of a 3% deficit to GDP ratio postponed to a distant 2014.

The combination of all these factors, massive austerity cuts, the realisation that it is the workers and the poor who are being made to pay for the crisis, and the fact that the people can clearly see that there is no end in sight to this black hole of austerity cuts and recession have provoked this massive social explosion.

The unprecedented movement on September 15, under the very telling slogan of "away with the troika, we want our lives back," was not called for by the left parties or trade unions, but was a semi-spontaneous movement from below, a genuine uprising of the people which put the prime minister against the ropes.

This is how the Spanish paper El Pais described the demonstration in Lisbon, with over half a million present: "Above all, the march was a real tide of pensioners, the unemployed, mothers, civil servants, families, off duty police officers, postal workers, doctors, small shopkeepers, long haired youth, neo-hippies, businessmen, veterans of the struggle against the Salazar dictatorship and youth who left their homes on Saturday afternoon and started to shout that they cannot take it anymore, that they have the feeling of being expelled from their own country." (see VIDEO of aerial images of the Lisbon demo).

Another 100,000 marched in Porto and demonstrations which were the largest since 1974 also took place in another 40 cities and towns (PIC Gallery). As happened before in Greece, since announcing the latest measures on September 7, the prime minister and his ministers have seen all of their public appearances challenged by angry groups of citizens throwing eggs or tomatoes, shaking official cars and shouting the ever more popular insult of "gafunos" (thieves).

The wave of indignation has been so powerful and widespread that it has provoked splits within the ruling coalition of the two right-wing parties, PSD and PP. Even the Socialist Party, which signed the Memorandum of Understanding (MoU) with the troika before losing the elections in 2011, and is therefore also co-responsible for these measures, has been forced to announce that it will oppose the 2013 budget. 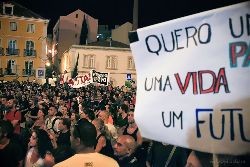 Photo: VideoplastikaThe troika has responded to the wave of opposition to the changes in the TSU with a strong statement to the effect that the handing over of the next tranche of the bailout is dependent on the implementation of this measures, which are part of the latest revision of the MoU, and reminded the Portuguese that, in fact, this particular measure was proposed by the Portuguese government in order to replace some other cuts which the Constitutional Tribunal had ruled out of order.

Clearly, the Portuguese ruling class and the EU are worried about the revolutionary potential of this movement, José Manuel Barroso, European Commission president and a former prime minister of Portugal, has warned against a possible political “rupture or polarisation.”

The question which is in everybody's minds now is: what next for the movement? The show of strength on September 15 reveals that there is overwhelming opposition to this government and many were already calling for this government to be brought down. The statement read at the end of the demonstration in Lisbon is correct in describing the movement as having achieved "something extraordinary". It explains how the people no longer accept that these measures are inevitable: "we do not accept the situation of misery they want us to live in, the misery of the lack of bread, the misery of losing one's house, the misery of casualisation of labour, of the work they steal from us, the right to a decent job which is denied, the misery of increased transport prices, of tickets we can no longer afford and which we needed to go to school or to work, of a state education they want to destroy, as they want to steal the right to fall ill and receive decent treatment in a health service which belongs to us".

The statement also discusses perspectives for the movement: "this is the beginning of many other things... it is urgent that we take change into our own hands... let's show once and for all that we are able to unite..." It also clearly calls for the fall of the government: "let's be clear about our protest and demand altogether that this government of the troika – a government which is more pro-troika than the troika itself – must resign!" And it adds: "but it is not enough. We do not want to replace this government of the troika by another government of the troika light. The troika and its austerity measures do not work... This demonstration is showing the red card to all the austerity policies of this government but also those of any other government which attempts to change the names of things but implements the same measures". In discussing what to do next, the statement correctly identifies the "importance of a general strike in this phase of the struggle" and it adds that this should be a "popular general strike" involving all sections of society, called by the trade unions but involving widespread support from the population as a whole, "able to paralyse the whole country, in unison, against the disaster that is being imposed on us". 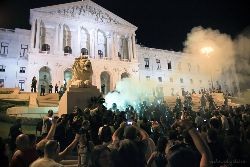 Protest outside National Assembly. Photo: VideoplastikaThe statement finishes with an appeal for another demonstration on the evening of September 21 when the Council of State will meet to discuss these measures and also recognises the international character of the struggle: "It is important that this struggle should ignore borders and become, like today, Iberian, European and international."

The leaders of the CGTP have already publicly called for the downfall of the government and everyone is expecting the trade unions to be forced to call another general strike. So far the CGTP has called for a national march on Lisbon for September 29, but has resisted fixing a date for a general strike. This time even the Socialist Party aligned UGT might be forced to join in, breaking the agreement they signed with the government at the beginning of the year. The experience of Greece, however, shows that in the current context of extreme capitalist crisis, even the most militant of general strikes may not be enough to force the government to retreat. It is necessary that the workers' movement and its organisations are able to pose the question of what is the alternative to capitalist austerity and also to offer a clear political alternative. The question is: if this government is brought down (and that is a distinct possibility), what should be put in its place and what policies should be implemented?

The bourgeois media in Portugal is full of rumours and discussions about the possibility of a technocratic government which could replace the current one. The Socialist Party leaders have clearly stated that this would be their preferred option as it would allow them to avoid having to be solely responsible for extremely unpopular measures. They are neither prepared nor willing to take over at this time. On the other hand the ruling PSD, facing massive discrediting and internal splits as a result of the pressure of the masses against its policies, might also prefer to step down and let a "technocratic" government take over.

The latest opinion polls, after the September 7 announcement, show a decline for the ruling coalition with the PSD down to 33% (from a peak of 38.7% in the June 2011 elections) and the PP slightly down to 10% (it had 11.7% in the elections). The Socialist Party has grown from 28.1% to 35.4% and there is also some increase in the two parties to its left, with the Communists going from 7.9% to 9.3%, and the Bloco from 5.2 to 7%. Clearly, these polls do not reflect the full extent of popular opposition to the current government and the depth of the accumulated anger.

It is crucial for both the Communist Party and the Bloco de Esquerda to adopt a clear programme which starts from the premise that the crisis of capitalism is at the root of the measures being imposed and from this develops a series of transitional demands that link the concrete struggle against the different austerity measures with the general perspective of expropriation of the capitalists and the democratic planning of the economy under workers' control.