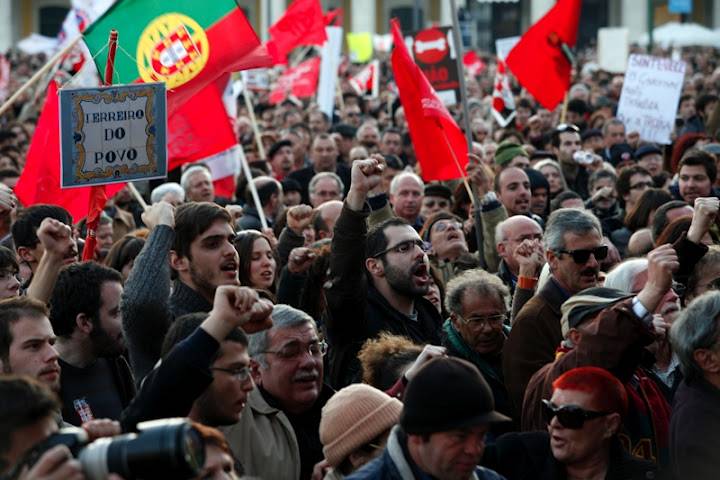 The recent ruling by the Portuguese Constitutional Court that four of the austerity measures in the government’s 2013 budget are unconstitutional is a major blow to the Portuguese ruling class. However, without the organisation of working people in defence of their rights, this ruling could mark a wave of devastating new attacks on ordinary Portuguese people. While we can celebrate the working class victory in the courts, we must realise that if the workers are to ultimately win the legal battle they, not the capitalist class, must be the ones making the laws.

A blow to the ruling class

The decision by the Court that four of the Portuguese government’s proposed austerity measures are illegal creates a number of problems for the Portuguese ruling class. The most clear and immediate problem is that 1.5bn Euros worth of cuts now cannot be made, meaning that Portugal will fail to meet the terms of its bailout set by the troika.

The Court’s ruling also serves to highlight the frenzied attitude of the Portuguese and European ruling class towards the austerity measures. These wealthy defenders of big business and finance capital are in such a rush to drown the people of Portugal in a tidal wave of attacks on living standards that they forget to check whether their brutal measures are legal even according to a legal system that acts in their interest.

Already the target of some of the country’s largest demonstrations, the troika is exposed by this ruling as the undemocratic agent of big business that it really is. Its willingness to bully the Portuguese ruling class into violating Portugal’s own constitution demonstrates the democratic bankruptcy of capitalism in decline.

It is no coincidence that this ruling, a victory for the working class, comes during a period of increased militancy amongst ordinary Portuguese people. We are seeing splits in the ruling class, between bourgeois judges and bourgeois politicians, as a result of the pressure building up from below against austerity. In such a period some sections of the ruling class will try to advocate diffusing the situation by giving some concessions to the workers. But others recognise that the present crisis of capitalism is of such severity that concessions such as halting the implementation of 1.5bn Euros worth of cuts cannot be afforded. The logic of capitalism dictates that there is no alternative to deep cuts at every level.

Which way out for the ruling class?

So what is the Portuguese ruling class going to do? One option would be to try to renegotiate the terms of the bailout with the troika. Based on the recent experience of Cyprus it is not difficult to imagine that the hard-nosed troika will accept nothing less than the original terms of the bailout. In any case, to turn once again to these hated international financial institutions would serve to enrage the Portuguese working class even further, something even the most resilient sections of the Portuguese establishment are likely to hesitate before attempting at the present time.

This means that the only options left open for the strategists of capital in Portugal are to make the cuts somewhere else, or to reform the constitution and legal system to allow them to proceed with their original plan. Either option would be a brutal attack on working people.

Finding additional cuts will squeeze the standard of living for Portuguese people to appalling lows. Unemployment is at 17% and steadily increasing, while youth unemployment stands as high as 38%. The economy is in a deep recession, having shrunk in the last nine quarters up to the last quarter of 2012. Demand for homelessness services in Portugal has increased by 25-30% since 2008. Further cuts in public spending will only exacerbate these problems and make life unbearable for huge numbers of Portuguese people.

Reforming the legal system and the constitution would represent a huge attack on the democratic rights of ordinary people. The constitution guarantees basic democratic freedoms that are the cornerstone of modern liberal democracies. Such a move is perhaps less likely because it would represent an admission that the ruling class are no longer able to afford a liberal constitution and the rights that it grants to ordinary people. However both the Italian and Greek establishments made that admission at the onset of this crisis of capitalism through the installation of technocratic governments to carry out those austerity measures with which a democratically elected government could not be trusted.

The tasks of the working class

Whichever route the Portuguese bourgeoisie decide to go down, their success will mean misery for working people. From this we must realise that victory in the courtroom, although valuable in some ways, is never going to constitute adequate protection for working people. Ultimately, if the ruling class is the one making the laws, it will always be able to remove any legal obstacles that stand in its way.

Portuguese people must have faith in themselves and their own capacity to organise to resist the austerity measures. Whether the government try to find new cuts somewhere else or try to reform the legal system, the might of the organised working class is the only thing strong enough to fight back.