Since the beginning of 2014 the word “recovery” has been looming large in all reports on the UK economy. The BBC speaks of a “remarkable performance”, with projections for growth for 2014 now standing at 2.5%. 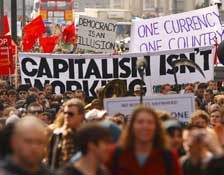 This figure should be considered within the context of a post-recession economy: 70 months after the beginning of the recession GDP remains 1.28% less than pre-recession levels; within the equivalent time period after the 1992 recession, GDP was 14.49% higher than the pre-recession level. This points to the seriousness of the economic crisis, and several other figures, such as the British youth unemployment rate of 21%, show that the recovery has not been felt equally.

The inequality of the recovery can be further explored through studying data released by Centre For Cities at the beginning of the year. Their ‘Cities Outlook 2014’ document shows the 10 highest and lowest performing cities in the UK across a number of different criteria such as unemployment rate and population growth.

Looking through the document certain trends become apparent: those statistics related to economic recovery show growth in traditionally prosperous areas of the country, such as the South East, Edinburgh and Aberdeen, alongside a decline in poorer, de-industrialised cities.

We should also question what these private sector jobs are – clearly there is a big difference between low-paid retail jobs and high flying financial careers. It is notable that Liverpool, which has since the 1970s experienced high levels of unemployment, reported the third largest percentage increase in private sector jobs – 5.8% - but yet has the second lowest employment rate at 63%.

Employment rate is again interesting from a Scottish context, Aberdeen is in the top 10 at 75.6% for July 2012-13, though this rate is still 2.3% lower than that of 2011-12; whilst Glasgow and Dundee are in the bottom 10 with employment rates of 64.8% and 64.3% respectively and reporting falls in employment of 1.5% and 1.9%. The fact that Glasgow comes 8th in terms of percentage of residents with high-level qualification makes this statistic particularly interesting. In terms of average earnings, Aberdeen and Edinburgh again feature in the top 10, placed in 8th and 5th respectively; whilst Hull and Doncaster repeat their placing in the bottom 10, with Hull having the lowest weekly average earnings of any city in the country.

These statistics point to the location of the recovery being concentrated in those areas of the country that have traditionally been more prosperous. This points to capitalism’s inability (and unwillingness) to provide jobs for all.

The inequality goes beyond city level; Glasgow also reports the highest level of inequality of any UK city - there is a 20.6 percentage point difference between the highest and lowest JSA rate for districts in the city.

It is of course important to note the restricted nature of the recovery, firstly in its weak growth and secondly in its location, but we should also consider the nature of the prosperity being experienced in the better performing areas. To do so we can focus on the case of Aberdeen, a city that scores in the top 10 for employment, private sector job creation, lowest inequality, business starts, business stocks, lowest JSA claimant rate and average earnings.

First we should qualify the low inequality rating, which is based on there being only a 6.7 percentage points difference between the areas in the city with the highest and lowest JSA claimant rates – this makes no reference to the jobs that people are working in and how much they’re earning.

Aberdeen’s prosperity is based upon the oil industry created in the city in the 1960s when North Sea Oil was first discovered. At that time Texan oil companies quickly moved into the area and even today it is difficult to get a hotel room during the week as many are used by workers based in Aberdeen during the week who return to London for the weekend. Aberdeen City Council states that the oil and gas industry accounts directly for 20,000 jobs in Aberdeen city and Aberdeenshire, and that the food and drink industry is also an important employer. We can safely assume that there is likely to be a big disparity between the earnings of most workers in the oil and gas industry and that of those in the food and drink industry.

The point to drive at here is that whilst the oil and gas industry may have brought a number of well-paying jobs to the city, it is also the case that for many it has only brought the opportunity of precarious, low-paid work in the service sector that has grown up around it.

This is an acute problem when one adds the fact that Aberdeen has experienced a huge increase in property prices (as a result of the oil money coming in, which remains concentrated in the hands of those in top jobs in the industry). Underlining this, Aberdeen has the most expensive rents in Scotland and house prices more than doubled from 2003-2013 – the highest increase outside of London. This means that many workers, particularly those outside of the oil and gas industry, are priced out of the market, with the BBC referring to first-time buyers in the area as more likely to be older and relying on support from their parents.

It is clear that the weak recovery that has occurred in Britain has been reserved for those traditionally more prosperous areas; and even in these areas, “recovery” comes with problems of inequality made sharper through rising prices.

Most workers are not feeling the recovery - and this is when the majority of government cuts are still to be made. Under capitalism any prosperity that does exist will be limited to few hands, as well-paid, stable jobs are ever harder to come by – 47% of recent graduates work in jobs that do not require a degree. Only through fair distribution and a planned economy under socialism can we avoid further crisis and ensure prosperity is felt by all.