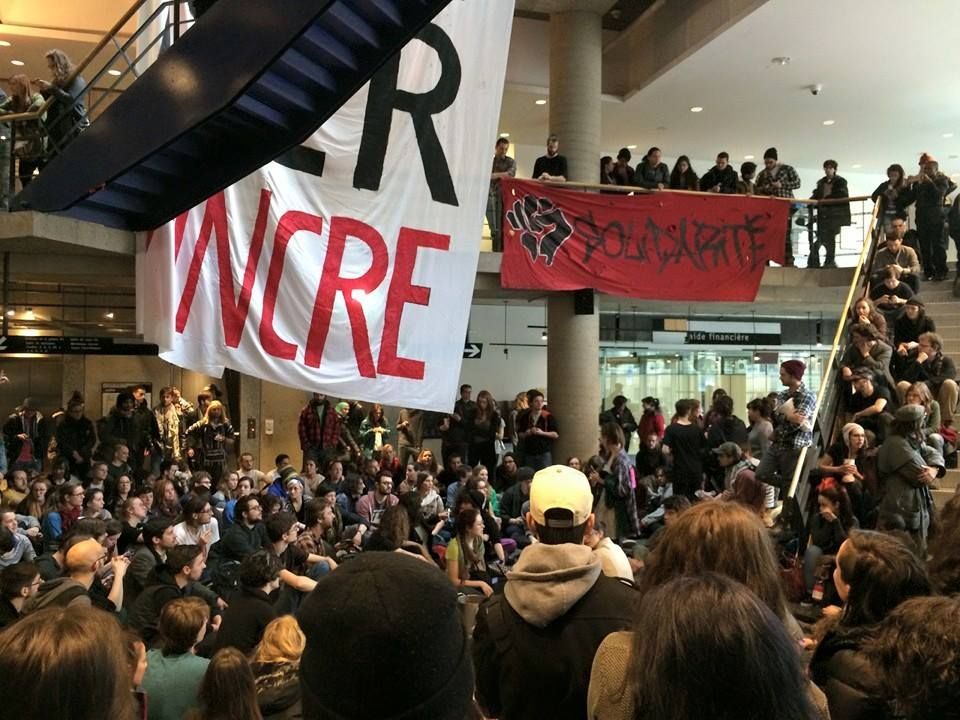 The past few days have seen some significant developments in the movement of students and workers in Quebec.

This past weekend (Apr. 4 and 5), at the congress of the radical student union ASSÉ, the executive resigned amidst criticism from rank-and-file students over the executive’s comments pushing for an end to the two-week-old student strike. The congress rejected their resignation and moved to impeach the entire executive instead. It seems to have been a victory for the radical leftists, and ASSÉ is now taking the position of continuing the strike.

Unfortunately, this was debated for several hours and very little was said about bringing the workers into the struggle, which is the central point. The student strike cannot win without the working class joining the movement.

This past week, many student associations voted to continue the strike, but a good number also voted to return to classes as the support for the strike was quite weak at some schools.

At UQÀM, the strike has remained quite strong, mostly in response to the actions of the university administration. Administrators expelled nine students for political reasons, and called on injunctions against the picket lines. They also hired an extra 100 security guards, obviously in preparation for a crackdown of sorts.

This took place on Wednesday (Apr. 8) as students defied the injunctions and disrupted classes anyways. This caused the university rector, in an unprecedented move, to call riot police into the school to break the pickets and arrest students. Over 20 students ended up being arrested, and there was significant violence between security guards and students when the guards tried to destroy the students’ pickets.

University professors then formed a human shield, blocking the riot police from engaging the student protestors. The riot cops, uneasy about repressing professors as well, were forced to retreat.

This led to a spontaneous occupation of the DS building at UQÀM, in which several hundred people were involved at its height. They demanded an end to the injunctions, a reversal of the political expulsions, the release of the 21 arrested students, and an agreement that riot police would not be called onto the campus.

The occupation sent a delegation of professors, teaching assistants, and students to negotiate with the rector for nearly three hours, in which the rector refused to budge on any of the demands. This led to the main student associations and the professors’ union to call for the rector’s resignation. The occupation decided to continue until their demands were met. At 9:19pm, the Montreal police tweeted that the university rector had given the go-ahead to enter the campus to disperse the occupation. A couple of hours later, over 100 riot police broke into the school, shattering windows in order to gain entry. The police put an end to the occupation in a brutal manner, including using tear gas.

This has led to denunciations from most of the main unions across the province, as well as Quebec solidaire. Solidarity actions from elsewhere in Quebec have also popped up, including the occupation of the rector's office at the University of Laval in Quebec City.

There was also a large silent demonstration which marched through UQÀM’s campus on Thursday.

The indignation regarding this incident seems to have spread quite deep and may serve to ignite the struggle and spread it further to the working class, just as the introduction of Bill 78 helped to bring many layers of Quebec society into the student struggle of 2012.

The move towards a general strike has also been gathering steam as 11 CÉGEP professors’ unions in Quebec have now voted in favour of a 24-hour general strike on May 1st. As well, a daycare workers’ union representing 3,000 workers also voted for strike action on May 1.

Supporters of IMT Quebec have been actively intervening in the movement, present at many demonstrations and protests. Our manifesto on the movement has been very well received and an easy sell, especially amongst students whose mood is quite radical and who are looking to understand the reasons for the Quebec Liberals’ austerity. The need to connect the fight against the cuts to the fight against capitalism is being understood by many.