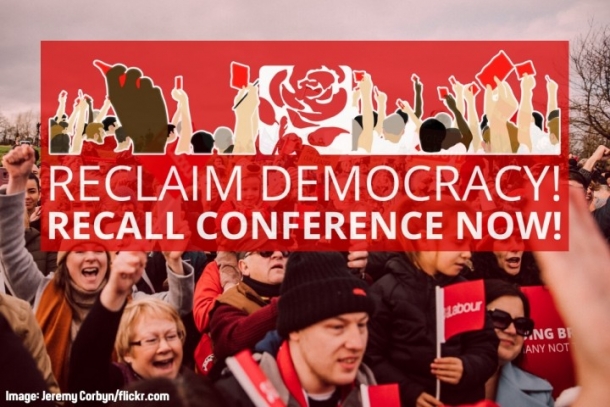 The Labour right wing’s clampdown on democracy continues apace. At the same time, the campaign for an immediate recall conference is gaining momentum. It is time to ‘rise like lions’. Reclaim democracy! Recall conference now! A national rally is planned for 6 March at 11am British time.

The campaign for an immediate recall conference of the Labour Party was officially launched on Monday 8 February. In the weeks since, the campaign has gone from strength to strength.

The recall conference campaign hit the headlines on launch day, with coverage in a number of prominent publications, such as the Huffington Post and the Independent.

Supported by a coalition of left-wing groups and trade unions – including Momentum, the Socialist Campaign Group of MPs, Unite, the FBU, the bakers’ union, ‘Don’t Leave, Organise’, and Labour4Clause4 – the campaign has already rattled the right wing.

Feeling the heat, Keir Starmer was even forced to come out and publicly assert that “the vast majority of the party” still supports him. If that’s really the case, then why are he and David Evans clamping down on the democratic rights of Labour members?

The campaign has found a strong echo amongst grassroots Labour members. Activists in CLPs up-and-down the country have already passed emergency motions calling on the NEC to organise an immediate recall conference (see below for a model motion).

More are likely to follow suit in the run-up to the Labour NEC meeting on 11 March, where the question will be discussed.

To build the pressure on the NEC, supporters of the campaign are organising a number of local roadshow meetings across the country, providing a platform for rank-and-file Labour members to discuss the burning issue of party democracy.

This question has become all the more relevant in light of recent events – such as the selection stitch-up in the Liverpool mayoral elections.

But this is only the latest in a long line of clampdowns on democracy within the Labour Party. From the suspension of Jeremy Corbyn and the subsequent removal of the whip; to the attacks on grassroots activists and the diktats banning any discussion within CLPs: Keir Starmer, David Evans, and the right wing are riding roughshod over party members and their democratic rights.

This is why we need an emergency conference of the party: to resolve this crisis that is engulfing the party. Only conference – the highest democratic body of the party – can do this.

We say: Enough is enough! It is time to put power in the membership’s hands!

The ‘real democracy’ roadshow has already begun, with an inspiring online meeting organised by campaign supporters in Sheffield held on Wednesday 24 February (see report below).

Further online events are planned for activists across the country (click on the links below for more details):

The roadshow will culminate in a national online rally for the recall conference campaign on Saturday 6 March, where speakers from across the labour movement will discuss why we need to fight to reclaim democracy, and let the members decide the fate and future of our party.

Follow the Reclaim Democracy, Recall Conference campaign on social media for all the latest updates on events taking place.

While the Labour right wing are busy attacking the membership, the Tories are getting away with murder. Starmer’s ‘credible’ and ‘constructive’ opposition has meant no opposition at all.

Instead, the leadership are attempting to take the party back to the dark days of Blairism; and to demonstrate to the establishment that Labour will be a ‘safe pair of hands’ for capitalism.

This is why we need to take back control of our party. This means organising and fighting to transform the Labour Party, with bold demands for genuine democracy, open selection, and clear socialist policies.

So join the fight today! Put members in control!

The recall conference campaign calls on activists to propose the following resolution as an emergency motion in CLPs.

Why is this question an emergency? Because the matter is to be discussed at the NEC meeting on 11 March, and motions from CLPs must be received a week before this. Given the time restraints, therefore, this motion can only be submitted to CLPs as an emergency.

This meeting notes the escalating crisis within the Labour Party concerning freedom of debate, freedom of speech, and interference in the workings of our CLPs.

This meeting believes that the party’s crisis needs to be addressed urgently.

This meeting recognises that the supreme policy-making body of our party is our national conference, composed of delegates from the CLPs, trade unions, and other affiliated organisations. We believe that this is the only body with the necessary authority to resolve this crisis.

We therefore demand that the NEC organises an immediate national recall conference of the Labour Party, under rule Clause VI:1 of the Constitutional Rules*, with the purpose of ending the impasse, restoring party democracy and achieving genuine unity as the only means for the party to achieve victory at forthcoming elections.

*“The work of the party shall be under the direction and control of Party conference, which shall itself be subject to the constitution and standing orders of the Party. Party conference shall meet regularly once in every year and also at such other times as it may be convened by the NEC.”

On the evening of Wednesday 24 February, a joint meeting was held between Sheffield Labour Left and the Reclaim Democracy, Recall Conference campaign.

The purpose of the meeting was to discuss how socialists in the party can fight back against Starmer’s onslaught against the left. As comrades explained, we need a recall conference to put a stop to the right wing’s attacks, and to resolve the crisis that they have plunged the party into.

Local members from across CLPs in Sheffield attended the meeting. This included several suspended CLP officers who had defied David Evan’s clampdown on democracy.

Comrades discussed the campaign, and how the left can rally around the demand for a recall conference in order to fight back.

Many were in agreement that the left are strong in numbers, but that this potential is currently being unfulfilled. While the right may have hold of the bureaucracy, socialists dominate amongst the rank and file. As Rob Sewell stated, now is the time to rise like lions in unvanquishable number.

There was also a clear recognition that, while the struggle may be tough, there is no alternative but to fight using every weapon in our arsenal. And this includes campaigning for an emergency recall conference, where members can restore party democracy and reaffirm the socialist policies that the party should be fighting for.