Details
our correspondent in Madrid
03 June 2008

Share
Tweet
On Monday over one hundred people crowded into the CAUM Centre in Madrid to hear Alan give a speech launching his latest book, which is an in-depth reply to the reformist ideas of Heinz Dieterich, who has been providing a theoretical back-up to the bureaucracy within the Bolivarian movement which is attempting to slow down the pace of the revolution. If listened to, these reformist ideas would lead to the derailing of the revolution.

On Monday, June 2 over a hundred people crowded into the auditorium of the CAUM Centre in Madrid to hear Alan Woods present his new book Reformism or Revolution. 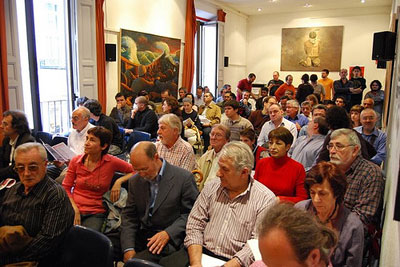 The Spanish edition, which has just appeared, was launched at the Madrid Book Fair, a major event in the cultural life of Spain, which opened last Friday and will last almost two weeks.

As usual, the stall of the Fundacion Federico Engels, the only stall dedicated to the sale of Marxist literature, was a centre of attraction for the Left. Over the weekend, despite the heavy rainstorms, large crowds of people flocked to the Paque del Retiro and the sales of books at our stall were even greater than last year. The best selling title was Reformism or Revolution.

The audience at Monday's meeting was very mixed. The majority were young comrades of El Militante, which has experienced an important growth in the last few months. But there were a good number of older comrades, workers, trade unionists, communists, socialists and veterans of the struggle against the Franco dictatorship.

The meeting was chaired by Juan Ignacio Ramos, who introduced the speaker and explained the reasons why the book was necessary. He pointed to the proud record of the Frederick Engels Foundation in publishing books such as Reason in Revolt, now in its sixth Spanish edition with sales of over six thousand.

Underlining the impact that our ideas are having, Juan Ignacio pointed to the speech made by Hugo Chavez the day before on the TV programme Alo Presidente, in which he quoted from Alan Woods' book Bolshevism, the Road to Revolution. 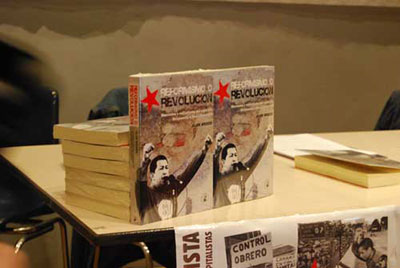 In his speech, which, as usual, he delivered in fluent Spanish, Alan Woods started by recalling the revolutionary movements of the working class: May 1968 in France, the Portuguese Revolution of 1974-5 and the revolutionary struggles of the Spanish workers against the Franco dictatorship.

He pointed out that the working class could have taken power but in each case was frustrated by its own leadership. "What more could we ask of the French, Portuguese and Spanish workers? What more could they have done than what they did? If they did not succeed in taking power, it was not their fault but that of the reformist and Stalinist leaderships."

Alan went on to lambaste the leaders of the Spanish workers for "that repulsive abortion called the Transition, which left the power in the hands of the same old people, the landlords, bankers and capitalists." He was particularly scathing about the slavish attitude of the Socialist and Communist leaders towards the monarchy: "In the past it would have been unthinkable that socialists or even liberals should bend the knee to the anti-democratic institution of monarchy," he said.

Alan condemned the press campaign against Chavez, who is continually portrayed as a dictator and a terrorist. He pointed out that Chavez has been elected more times than any other political leader in the world. "Who elected the King of all the Spaniards? He was only elected by one Spaniard and that was the dictator Franco", he said.

After the fall of the USSR, there has been an unprecedented campaign against socialism and Marxism, Alan continued. "It is natural that the bourgeoisie should do this, but we also have a Greek chorus of ex-communists who act like rats fleeing from a sinking ship. They have abandoned communism and gone over to capitalism. In Russia the former leaders of the ‘Communist' Party have become capitalists."

Alan then began his onslaught on intellectual revisionists like Heinz Dieterich, against whose ideas the book is directed. "These people say that Marxism is old fashioned and demand something new. What would you say to someone who said that the wheel is out of date and demand that we invent a new kind of wheel - a wheel of the 21st century? Comrades, we do not need to re-invent the wheel, nor do we need to re-invent the ideas of Marxism, which are just as correct and relevant today as when they were written."

Alan explained that the reformist ideas of Heinz Dietrich were an attempt to provide a theoretical justification for the bureaucracy that is striving to halt the Venezuelan Revolution. These people do not want to touch private property. But how can you have socialism unless you expropriate the land, banks and big industries?" Alan asked.

Although people like Dieterich see themselves as realists, Alan pointed out that they were really the worst utopians. To preach class peace and conciliation when the oligarchy was determined to destroy the revolution, he said, was like trying to persuade a man-eating tiger to eat salads instead of flesh.

Alan said that the Venezuelan Revolution had reached the point of no return and was facing a grave danger. "You cannot make half a revolution. In the end, one class must win and the other class must lose. It is necessary to finish the job and this can only be done by expropriating the property of the oligarchy and appealing to the workers, peasants and soldiers to take the power into their own hands," Alan concluded. 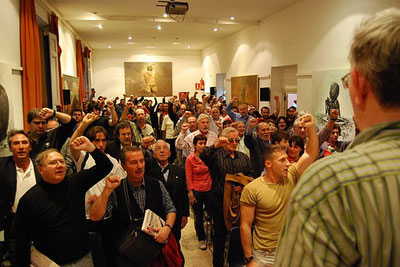 This speech, which lasted over an hour, captivated the audience and was greeted with a prolonged ovation. This shows how the ideas of revolutionary Marxism can connect with many people if they are expressed in such a clear and convincing manner.

There followed a period of questions, which dealt with issues like Latin American integration and ALBA, the danger of armed intervention from Colombia, the trade unions and other matters, which Alan answered very effectively. At the end Juan Ignacio appealed to all who agreed with these ideas to support the work of the Frederick Engels Foundation and join El Militante. Then everyone stood and sang the Internationale with gusto.

After the meeting there was time for the signing of books, of which over forty were sold. Many of those present had already bought the book in the Fair. All in all, the meeting was a tremendous success. The next stage will be a month-long tour of Venezuela, when Alan will present the book in different states. In the autumn he will return to Spain for a nationwide tour.