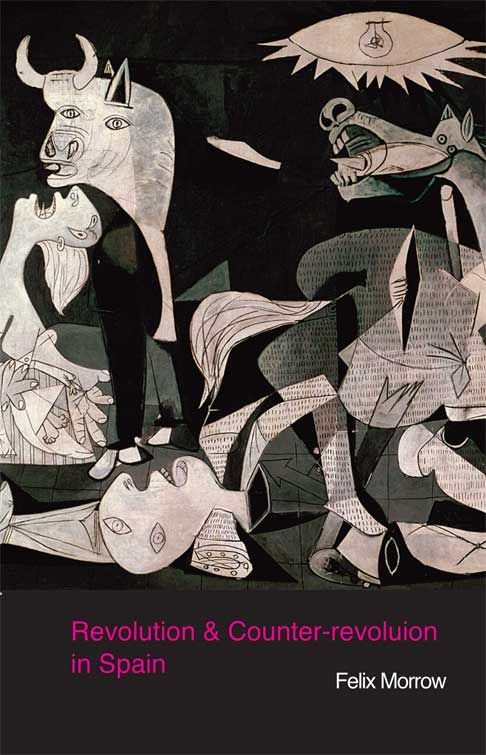 Darrall Cozens looks at the crisis unfolding in present day Spain and finds that there is much to learn from a look back at the mighty struggles of the past including the Spanish Civil War as outlined in Felix Morrow's book now republished by Wellred Books.

"Hegel remarks somewhere that all facts and personages of great importance in world history occur, as it were, twice. He forgot to add: the first time as Tragedy, the second time as Farce" (Karl Marx, 1852, The 18th Brumaire of Napoleon Bonaparte)

The present crisis of world capitalism, triggered by the financial crisis of 2008 and the bailouts of the banking system, is bringing untold misery for the working class on a world scale. All of the gains that have been achieved through decades of struggle since WW2 are now under threat.

The economic crisis has in turn spawned a political and social crisis that in steadily unfolding. The Arab Spring played an important role in rekindling movements of the working class on a world scale as capitalism itself attempts to solve the crisis by attacking wages, jobs and living standards, and by slashing public spending.

In Europe in particular there have been countless general strikes in one country after another as workers have sought to defend their gains. In Greece alone some 18 or 19 have taken place, so too in Italy, France, Ireland, Portugal and Spain. European capitalism is breaking at its weakest links.

Today, Spain finds itself at the centre of the crisis. Just like Greece it is descending into a spiral of economic collapse, social upheaval and political instability. Even the rich have lost faith in their system with a “wholesale collapse in confidence in the country’s ability to repair itself.”

Europe’s fourth largest economy is in a double-dip recession and expecting a bank bailout while the budget deficit increases and jobless rates soar. Unemployment is officially 24.6% but amongst 16-24 year olds it stands at 53.27% and over half of those with a job are on short term contracts. That is almost 6 million people in a working population of 23 million. Some 1.73 million households have all family members without work!

On the other hand over the past three months the rate of capital outflow has been 52.3% of GDP, more than twice the rate of 23% that exited for Indonesia in the Asian financial crisis. Italy, a country also in crisis, has seen capital outflows of only 15% of GDP in the past three months. In July alone Spanish bank deposits fell by 75bn Euros, the biggest monthly fall since the ECB began monitoring these developments in 1997. Foreign and Spanish capitalists have no faith in the economic future of Spain.

And the pain that is being doled out to Spanish workers is not over with attacks on pensions, unemployment benefits and labour rights, along with the privatisation of state owned assets in railways, ports and airports. VAT, an indirect tax that hits the poorest hardest, has also increased from 18 to 21%. These cuts, initially carried out by the PSOE under Zapatero, are now being implemented at an accelerating pace by the PP government of Rajoy.

Spanish workers, however, have not taken these attacks lying down. They too have staged a series of mass mobilizations, including a general strike, but to date have not succeeded in stopping the PP government, which has pledged to increase the attacks on working class living standards in return for even more bailouts from Europe.

The marvellous traditions of struggle of the Spanish proletariat are emerging once more. Hundreds of thousands have been enthused by the struggle of Spanish miners in Asturias and Leon. 8,000 miners, supported by their families, were on strike for 67 days over the summer. They acted to defend their jobs and communities where 30,000 more rely on the mining industry. The spark for the protest was the Rajoy government’s removal of the state subsidy to the coal industry, threatening the livelihoods of thousands. The subsidy is worth £161m, some 0.31% of the total cuts package of £51bn. To put it another way, the subsidy was worth 0.006% of the money given to the banks in Spain as a bailout. Capitalism in crisis will find public money to defend the rich, but not the working class.

The miners reacted – and how. Pit occupations, blockades of highways and railways a state of near insurrection as miners using home-made rocket launchers fought with riot police who had invaded their homes in a brutal manner. And then in the summer we saw an 18-day march on Madrid, some 400 kms, that was met by hundreds of thousands of workers in the early hours of a July morning singing the Internationale and the miner’s traditional song Santa Barbara.

There can be no doubt that the class struggle is firmly back on the agenda in Spain. This struggle had been somewhat blunted by the upswing of capitalism and the boom in Spain, especially in construction. Now, with the unending downturn in the economy workers have been forced onto the offensive to defend themselves and their families.

And this blunting and subsequent resurgence are not new. They have been part and parcel of almost every boom and slump in the history of capitalism. Within living memory, in the 1930s, the slump in world capitalism produced a prolonged period of wars, revolutions and counter-revolutions as workers all over Europe struggled to ensure that they did not pay the price of the failure of capitalism.

In Spain, that struggle took on the form of a Civil War that lasted three years, from 1936 to 1939. The cost was a million dead, tens of thousands into exile, and thousands executed or worked to death in Franco’s fascist prisons and labour camps. In July 1936, when the Fascist hordes staged a coup to overthrow the elected Popular Front government, it was the workers, poorly armed, who stormed barracks to thwart the coup and get arms.

On one side in this war stood the landowners, the industrialists, the church, the tops of the Armed Forces, mercenary fascist forces from Germany and Italy, and conscript colonial soldiers from North Africa. On the other side stood workers, peasants, rank and file soldiers and their organisations, as well as many leading intellectuals such as the poet Lorca.

The workers were eventually defeated and from 1939 to 1975 Spain was in the grip of a military police state. This defeat, however, was not brought about by force of arms, but by the political policies and programmes, strategy and tactics, used by the political parties of the working class, and prime amongst them was the counter-revolutionary role played by the Stalinised leadership of the Communist Party.

As Leon Trotsky said, "I believe that I have expressed it in many interviews and articles: The only way possible to assure victory in Spain is to say to the peasants: 'The Spanish soil is your soil.' To say to the workers: 'The Spanish factories are your factories.' That is the only possibility to assure victory. Stalin, in order not to frighten the French bourgeoisie, has become the guard of private property in Spain." (The Case of Leon Trotsky, p 294).

But it was not only the Communist Party. The Anarchists, organised in the CNT/FAI, were the biggest political force among the Spanish proletariat. They eschewed government, organisation and leaders, yet when invited, their leaders entered into the bourgeois government of the Popular Front and aided the restoration of the bourgeois state. The Socialist Party, the PSOE, also in turn, adopted revolutionary language but practised reformism. Perhaps the worst ire should be kept for the POUM, a party that called itself Marxist and had a position against Popular Frontism but also ended up joing the bourgeois government which was dismantling the elements of workers’ power which existed.

Today, the crisis of capitalism is awakening in Spain once again the traditions of combat of the Spanish proletariat. Once more we are seeing that capitalism, in its period of senile decline, cannot guarantee even the semblance of a semi-civilised existence for millions of workers. Yet the system, no matter how decrepit it will become, will not fall of its own accord. It will have to be overthrown by the conscious intervention of the working class armed with a fighting programme for socialism with a revolutionary party at its head.

In the coming period all of the ideas that are prevalent in our movement to change society and build socialism will be put to the test. And all except the programme of Marxism will be found wanting. In this battle of ideas for the leadership of the struggle to end capitalism, this work of Felix Morrow’s will be an invaluable tool.

It ranks with the great works of Marx on the Paris Commune and Trotsky’s History of the Russian Revolution. It also stands in parallel with John Reed’s blow by blow account of the Russian Revolution in Ten Days that Shook the World. Morrow’s work is the product of being an observer and an analyst of each stage of the development of the Civil War in Spain. At each stage of the conflict he reports on each turn and provides reasons and outcomes. But do not think that this penetrating analysis is a heavy tome. Quite the contrary! It is easy reading, accessible to all, in a language that explains so simply that what seems dense and obscure becomes crystal clear.

We are now entering a period of revolutionary upheaval and if we wish to be successful, we must read and study the previous attempts to change society, both successful and not so, in order to arm ourselves with the methods and programmes that we will need to ensure success. Felix Morrow’s work will be invaluable in this process.

Buy the new Wellred edition of the book on wellredbooks.net.