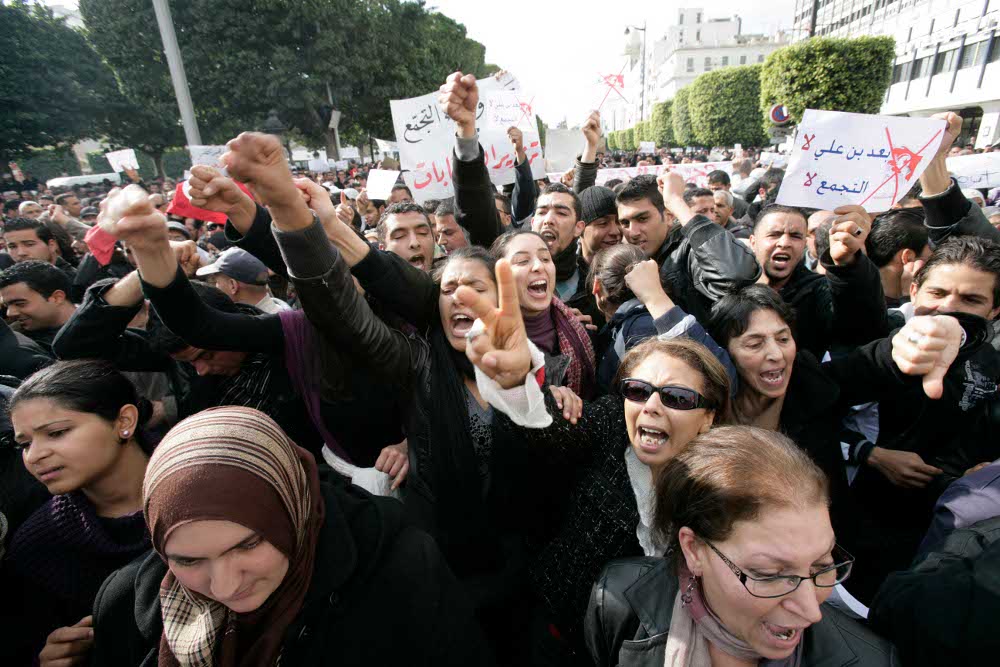 On Friday, 14th January the revolutionary upsurge of the oppressed masses in Tunisia made history. Such was the intensity of the mass revolt that the autocratic and corrupt ruler Zine al Abidine Ben Ali had to scurry to the nearest airport to flee the country he had despotically ruled over for twenty three years. After being refused entry by his “friend” Sarkozy he was finally accepted by the Saudi monarchy. How apt this was!

The movement had evolved from localized social protests into a countrywide upheaval that defied repression. And the state could do nothing to stop this revolutionary storm that lashed across the country and jolted the regimes from Rabat to Riyadh.

The mainstream media once again rushed in with its own absurd definition of this uprising calling it a “Jasmine Revolution”. In the last few decades they have been giving various colours to revolutionary movements to conceal the real essence of these revolts where the masses were striving for a socio-economic transformation and to emancipate themselves from the exploitation and drudgery of this decaying capitalist system.

Not just the right-wing media, but also the ex-lefts and “progressives” are so deeply imbued with cynicism and demoralization that they refuse to recognize a revolutionary situation even when it is glaringly evident in front of their very eyes. Along with the bourgeois press and the media these intellectuals had written off the class struggle and revolution. In fact, they had capitulated to Fukuyama’s reactionary theory of “the end of history”, which even he has himself has since retracted in private conversations.

While the 2008 economic meltdown and biggest financial crash since 1929 has exposed the obsolete and redundant condition of capitalist economics, the general crisis that is ravaging society has had a disastrous impact on the intelligence of the bourgeois intellectuals and their so-called experts.

As late as January 6th 2011 the most serious and touted mouthpiece of the bourgeoisie internationally, The Economist, had this to say on the prospects of the regime in Tunisia: “Tunisia’s troubles are unlikely to unseat the 74 year-old president or even to jolt his model of autarchy”. It is not just a question of the intellectual decline of the ruling elite’s ideologues. There has also been a steep fall in the confidence of the political leaders of a system in terminal decay.

In a period where so much cynicism and despair reigns within the higher levels of society, the events in Tunisia have once again demonstrated that we are in an epoch of sharp turns and sudden changes. Wars and revolutions are on the order of the day. The extreme crisis of society, with price hikes, unemployment, corruption, exploitation, poverty and misery that keep on piling up, reaches a point where one “accidental” incident can spark off a revolt such as the one we are witnessing in Tunisia. The social and economic woes ultimately found a political expression.

Two very important features were witnessed in these stormy events. Firstly, there were reports of fraternization between the army and the people. In some cases the Army was protecting the demonstrators against the police forces. This was the reason why the army was withdrawn from the streets of the capital and replaced by the police. When the mass demonstration reached the presidential palace the people and the soldiers embraced. This is a typical characteristic of a social revolution.

The second salient aspect of this upheaval is the absence of Islamic fundamentalism in the movement. The young women who clashed with the forces of the state did not wear the burka. In a demonstration on January 15 an old Tunisian women said to a reporter, “Have you seen men with long beards at our demonstrations? No! Because we do not need those people to liberate ourselves.”

In his analysis of the situation in Tunisia, renowned Marxist leader, Alan Woods, wrote, “It is very important to stress that this is the first time that an Arab dictator has been overthrown by the people themselves without outside intervention. This represents a decisive break with a fatalistic view that has unfortunately become widespread in the Arab world that says: ‘yes there have been many struggles but we were always defeated’…” The main slogan of the movement in and outside of Tunisia around these historic events is, “Yes we can!”

However, the situation is not unique to Tunisia. Most of the Arab world and humanity beyond are suffering from the pains inflicted by the ever increasing crisis that has beset capitalism on a world scale and refuses to retreat. A joint study by the Arab League and the United Nations Development programme indicates that in most Arab countries young people constitute over 50% of the unemployed, the highest rate in the world. The same report puts the poverty rate at up to 40% on average, which means that nearly140 million Arabs continue to live below the poverty line. Worse still, the report noted that the region has seen no decrease in the rates of poverty in the last 20 years. The International Monetary Fund said that with current unemployment rates already very high, the region needs to create close to 100 million new jobs by 2020.

That explains why there is a simmering revolt throughout the Arab world. The stalemate in the liberation struggle and the miserable conditions of the masses in Palestine has further exacerbated the social contradictions and political tensions in the Middle East. The tremors of the volcanic eruptions in Tunisia are already spreading fast. A BBC Arab affairs analyst, Magdi Abdel Hadi, was quoted as saying: “Mr. Ben Ali’s demise may rattle the entire post-colonial order in North Africa and the wider Arab world.”

The artificial frontiers established by imperialism in the last century are in fact very fragile. Social protests and demonstrations have started to erupt in Algeria, Morocco, Jordan and Yemen. Egypt is already teetering on the edge. In Yemen the demonstrators were wearing Che Guevara caps and badges.

As we write powerful demonstrations are raging on. The masses are calling the interim government a sham. The imperialists are worried and trying to diffuse the uprising by setting up a façade of democracy, which will of course be of the elite and continue to serve the interests of their masters. Unless a revolutionary party manages to put itself at the head of the revolution this marvellous revolutionary uprising in the long run will sooner or later recede. But the manner in which it has erupted has surprised the world. Another revolutionary movement in the region can erupt with a Bolshevik leadership and win a socialist victory, leading to a socialist federation of the peoples of the Middle East.

[Published in the Pakistani Daily Times]