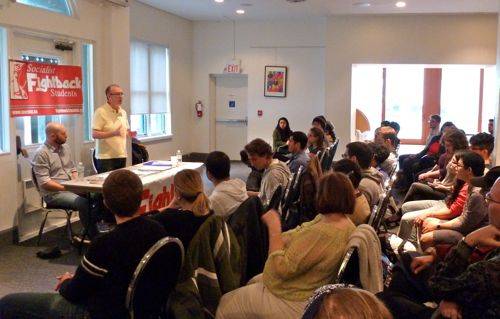 Over 60 people packed a room at Oakham House at Ryerson University in Toronto on Wednesday evening for a discussion with invited speaker, Rob Sewell, the editor of the British Marxist journal Socialist Appeal. The event, organized by Fightback, focused on the developing situation in the Ukraine in the context of the capitalist crisis today and the similarities with the political forces that gave rise to the First World War 100 years ago.

Rob began his presentation with an explanation of the developments that led to World War I in 1914. For most of the 19th century, proponents of capitalism believed that the rapidly occurring advancement in communication, transportation, and industry would bring endless economic prosperity and peace to the world. However in 1914, this grand assumption came to a screeching halt with the start of one of the bloodiest wars in human history. The illusion of endless peace and prosperity under capitalism was shattered. Modern developments in science and technology were transformed into the means of producing weapons and the preparation for an unprecedented war of destruction and misery. Instead of “free trade”, protectionism was on the agenda for different nations vying for power. Militarism, censorship, and dictatorship was the name of the game for every nation under capitalism. 9-million people lost their lives and millions more suffered the consequences of mass destruction.

As Sewell explained, war does not spontaneously appear because humans are naturally aggressive; if this were the case, why aren’t human beings in a natural state of war all the time? The causes of the First World War were a result of contradictions between powerful European nations like Germany, France, and Britain who wanted more territories, markets, and economic power. In school, we are told that the assassination of Archduke Franz Ferdinand of Austria was the spark that set off the First World War, but this does not explain anything. As Rob made clear, the assassination was simply a spark that erupted developing tensions between nations which led to the start of the war. There were many contradictions inherent within capitalism that led to the war which deserve a close scientific study, as Sewell reiterated this is why Marxism is beneficial as it provides the tools and methods to understand the world and the reasons behind events such as war.

Sewell went on to connect the epoch of 1914 to today’s period, specifically because of the 2008 economic crisis. “History repeats itself today on a higher level,” said Sewell, drawing parallels between what developed before 1914 to the situation today. The First World War was not a shock to Marxists within the 2nd International at the time, because they had understood the contradictions of capitalism, just as Marxists today in 2014 are not shocked by the ongoing proxy wars that are a hallmark of the world we live in today. The uprising in Ukraine was as a result of the decay in capitalism and its inability to provide better living standards for the people of the region. Contradictions between imperialist nations today have resulted in dangerous and unstable situation in the country. Western powers, primarily dominated by the USA, have tried to pull the nation away from Russian influence. As a result, reactionary, fascist tendencies have been given power to wrestle the equally reactionary Russian-backed oligarchy. Sewell pointed to the breakup of Yugoslavia after the collapse of the USSR in 1991 as another historical example of imperialist nations vying for territory, markets, and economic power.

After the presentation, a vibrant discussion followed with about 20 participants commenting and asking questions. A few Ukrainian nationalists were present and questioned whether the 40 trade unionists in Odessa were massacred by Kiev government-backed fascists. But Sewell answered by clarifying that Marxists should not take any sides with any imperialist power in any circumstance and that there was video evidence including heaps of information confirming the reactionary nature of the government and the fact that fascist thugs are being sponsored to terrorize and eliminate leftists and workers across the country. Marxists take the side of the Ukrainian working class, average people, against the ruthless powers of both the West and Russia in this conflict. Joining the EU would only leave Ukraine the similar fate of Greece. Continuing relations with Russia would only benefit the corrupt ruling oligarchs that originally dominated the country. The only solution for Ukraine and all other peoples of the world for a prosperous future, is one without this wretched capitalist system dominated by a minority rich. Only a fight against this system and the transition towards a socialist society can guarantee any kind of genuine prosperity. As Sewell summed up at the end, there are enough resources, science, and technology to create a paradise for all of us on this planet, the only obstacle in the way of the working class to achieve this is the abolishment of capitalism and the attainment of a socialist society.