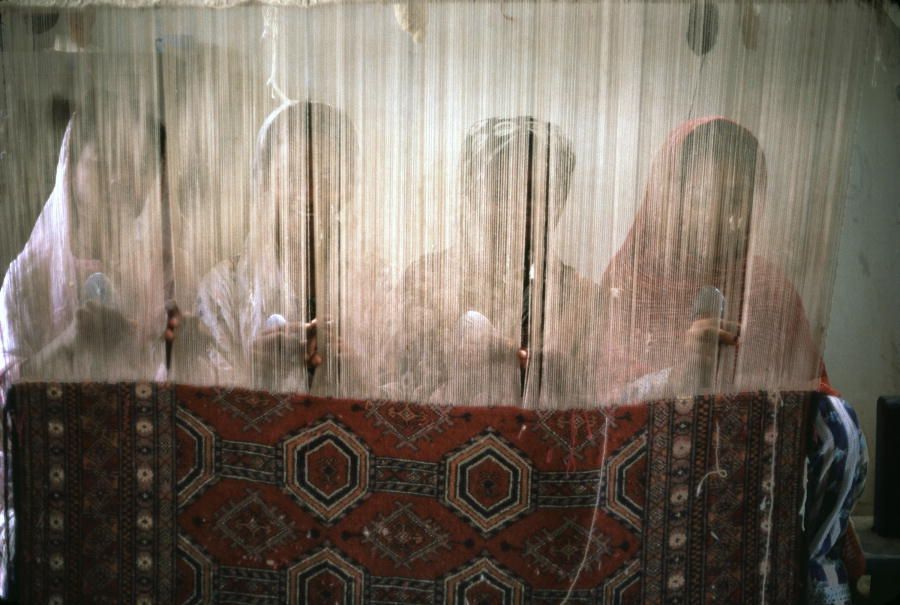 This is a report from Pakistan on the conditions of women workers and the activities and programme of the PTUDC on this question.

Karl Marx once said that "all hitherto history of mankind is the history of class struggle." Since the advent of class society the exploited class has been at daggers drawn against the ruling class. In slave society, slaves raised their hands against masters, in the feudal system the serfs rose up against the feudal lords and similarly we find a continuous struggle of proletarians against the capitalists.

Class distinction in capitalist society is more obvious than those of the previous epochs. There are two classes, one of which possess the means of production, and the other one is the proletarian class, which has to sell its labour just for its survival on earth.

The struggle between these two classes commenced with the establishment of capitalist society. The proletarian struggle is still continuing and will continue till the end of class society and the emancipation of proletarians from the ruthless clutches of cruelty, barbarism, suppression and tyranny imposed upon them by the capitalist system. Their freedom is vehemently linked with the establishment of a Socialist Federation of the whole world, which is impossible without the complete elimination of capitalism.

To make this economic struggle more coherent, properly organised and driven by collective efforts, the proletariat brought trade unions into being. As with the development of technique and industry, larger industry and factories spread all around where the downtrodden, battered, crisis-ridden and hunger-stricken labourers got a chance to establish trade unions. Trade unions are traditional platforms of economic struggle on the part of proletariat. These trade unions played a significant role in the improvement of living standards and the economic struggle of the labourers.

In the movement of the proletariat women have fought shoulder to shoulder with male workers, whether it was the great sacrifices and struggles of the working class of Chicago or the magnificent revolution of 1905, the Bolshevik revolution of 1917 or any other political upheavals.

Although at the outset very few women used to work in industries, factories or any other economic fields yet with the expansion of the economy, the economic activities of women increased particularly after the second world war, when more and more women came out of their homes to work and now women are performing their duties in all walks of life with an immense enthusiasm.

In Pakistan large numbers of women have been joining economic fields, the basic reason for which is their being low paid workers on the one hand and their concentration along with "acquiescent obedience" on the other. That is why the increase in women workers in big industries during the last five years is baffling and incredible as in some of the industries 60% to 70% of the workers are women. Before this very few women were attached to government institutions, as most of them were associated with health and education.

Other main reasons for the involvement of women in outdoor work are the disintegration of the family system and economic crisis. The economic crisis has given a heavy blow to the conservative and traditional thinking pattern, which confined women within huge-walled houses to just serve husbands, brothers and the rest of the family. Resurgent unemployment and economic disparity have forced the families to let their women go out to offices and industries.

If we take a bird's eye view of trade union movement very few women can be found on the scene. In the past it might have been for their being less in number as workers, but now that is not so; the great causes of women not being organised in trade unions has been the improper attitude of trade union leaders, social and economic suffocation and the general decadence of the trade union movement.

If we analyse divergent departments the picture can be delineated in such a way.

There are thousands of women nurses in the health department, although they have an association but its working is not as much effective as it should be. Before being banned by Zia al-Huq there were active unions containing a lot of ferment and active women within their sphere. Women played a significant role in the two great strikes of hospitals and they had to wash loose their jobs for going on strike in the first regime of Nawaz Sharif.

The betrayal of the trade union leadership's compromise and false strategy immensely shocked the trade unions in this sector so there is now the union but it is inactive and dormant. With a bit of hard work and correct strategy a lot of women could be organised in these unions and their potential can be galvanised into political struggle.

Women are working as teachers in the education department and a year ago a resistance movement was launched in this department, which basically opposed the steps such as downsizing. Three months back the female teachers vehemently took part in the strikes and processions and suffered violence from the state.

With the failure of the Pakistani state to invest and develop the health and education sector these vital sectors have been sucked up by the private sector. They are now the most profitable sectors in Pakistan. On the one hand they charge heavily for health and education on the other hand they employ mainly women workers at shamefully low wages. Mostly they are as low as 7-15 pounds monthly. These workers are totally unorganised and there is a dire need of unionisation of women workers in these sectors. There are 76,000 teachers employed in private institutions, 60% of which are female.

In the PTCL more than 3,000 women work and most of them are members of trade unions. In the resistance movement and strikes women have played a vital role. At that time a lot women became active in the trade unions but due to the unions' wrong attitude and backward culture the number of women involved went down.

The standards of living of the women workers in the PTCL is comparatively higher and that is why they are economically free somewhat and having combined working conditions - they can better perform in the movement and collaborate with other male workers. In big trade unions women take the casting of votes in referendums and elections seriously and they do not pay any heed to those who want to hold back the movement.

Similarly a great number of women work in PIA, Railways, WAPDA, banks and other institutions. But they are not active in the trade unions of these institutions. Most of the women are motivated just for the election campaigns so that the leadership can get their votes.

In the industrial sector most of the women work in textile, garments, pharmaceuticals, sports and the factories of surgical tools. In some of the big factories more than half of the workforce consists of women. Most of the women work on daily wages and contracts. These women are working in the worst conditions. They have to work for 12 to 14 hours and their wages are 40% to 50% lesser than those of male workers.

Apart form them women workers in offices of multinational corporations, travel agencies, private schools, big hotels and departmental stores, they are not allowed to establish trade unions whereas the conditions of women working in the homes and fields are worse than slaves.

At present more than 40% of women are enthusiastically active in the villages and these women do not enjoy their rights. The women who are fervently speaking for the human rights of women, child labour, and democracy and are working in the NGOs are themselves deprived of these rights. These non-governmental organisations have contributed in the decadence of the trade unions.

The NGOs exploit women burdened with economic duties. These NGOs prove to be a comfortable refuge for the men and women who accept charity and distribute it in the name of reforms. The male and female bosses of these NGOs live in luxury with huge wages and perks.

Without any processions, strikes, and economic and political struggle, enjoying delicious food, seminars allocated in the air-conditioned hotels, they have ensnared a lot of enthusiastic workers of trade unions.

The following are the main reasons why women are not active:

In the wake of the massive increase in women workers in industry it is essential to include and organise women for the consideration and dynamism of movement. No trade union be establish itself and perform work without the inclusion of women workers in the union.

Now it is the responsibility of the PTUDC to organise women and motivate them to play a dynamic role in the movement.

Working women are sobbing under the suffocating pressure of extreme exploitation, force, lust, ignorance and poverty. They want change and end to the decayed system. A correct revolutionary programme, strategy, and to crown them all a revolutionary party, can activate women by affiliating them with other parts of society. The emancipation of women is only possible through a class struggle along with their male comrades and not feminism, which only serves to disunite the working class on the basis of gender. History has put this duty on our shoulders.