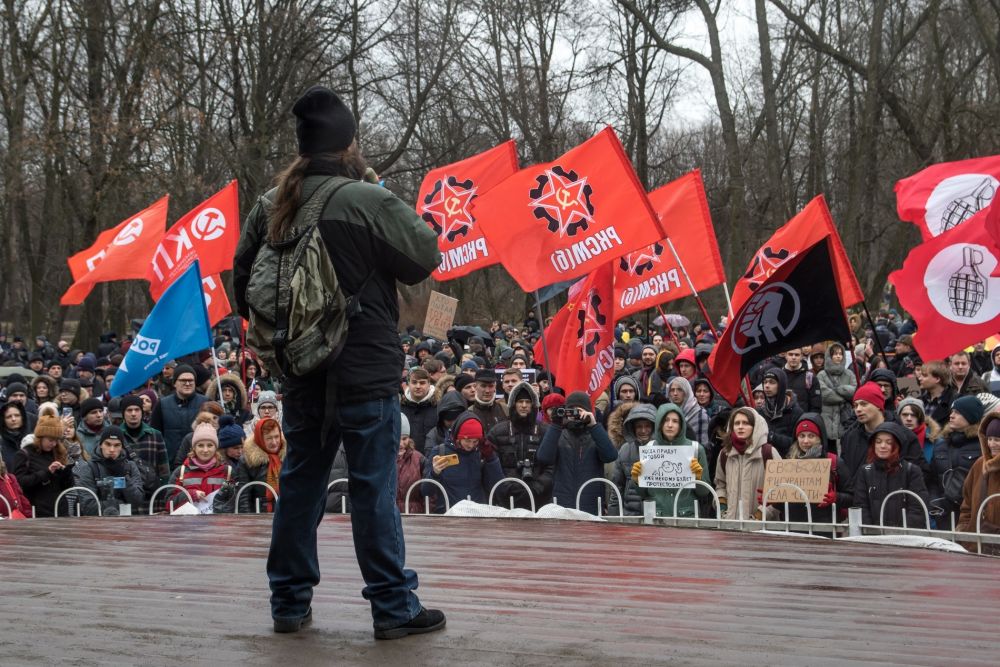 Last week, comrades of the IMT helped call a public protest in St. Petersburg against the Network Case, in which several left-wing activists have been given lengthy sentences under anti-terror laws after giving confessions obtained through torture. We share this report of the rally, originally published in Russian on 22 February.

On a rainy Saturday afternoon on 22 February, more than 500 people gathered on Yekaterinhofsky Island in St. Petersburg in order to express their solidarity with the defendants in the Network Case. At the call of the United Communist Party, the Marxist Tendency, the Revolutionary Komsomol and the Left Bloc, a variety of people came. Activists of various political and public organisations, human rights activists, friends and relatives of the accused, but above all hundreds of ordinary citizens. Many of them had handwritten posters that expressed support for the accused and convicted; and indignation at the actions of the investigation, prosecutors and the judiciary.

The rally, which took place three days before the hearing in the 224 Garrison Military Court of the Boyarshinov and Filinkov case, was a notable event in St. Petersburg. Information about the rally was distributed not only by the organisers, but also by a number of popular city media outlets. At the same time, the authorities launched a campaign of slander and misinformation, the apotheosis of which was an article published by Medusa on the eve of the rally about the possible involvement of anarchists convicted in the Penza case in the murder of two of their comrades. The townspeople, who had already gathered to go to the rally, were dumbfounded by the story, which seemed to have emerged from the pen of Dostoevsky.

By the beginning of the rally, the site of the Summer Theatre in Yekaterinhof Park was surrounded by a steel fence and hundreds of National Guards and policemen in full protective gear. Under icy rain and a piercing wind from the Gulf of Finland, rally participants lined up in long queues to pass through metal detectors, near which police searched the rally participants, carefully examining their posters and flags.

Comrade M. announced the rally open and gave the floor to Kirill Vasiliev of the United Communist Party. Kirill Vasiliev began his speech with the question of who in modern Russia is a true patriot: the one who defends the repressive machinery of the state or the one who fights against it? Here is a quote from his speech:

“Why did this thing become possible at all? Because there are still very few who care. Power is trying to break us all. If we agree, if we are silent, then the loop around our neck will be tightened even more. And therefore, introducing my comrades here, I am compelled to say that the Network Case is a shame on the modern Russian state. And frankly, I do not think that the state is reformable. It’s crucial to give the people the ability to recall the government, to create a new, truly democratic one, where the banned organisations will not be the mythical ‘Network’, but the ones whose employees got us into this mess.”

Russian Communist Union of Youth (Bolsheviks) member, Daria Gromova, said in her speech: “We are opposed to intimidation of political activists and of political organisations.” Meanwhile, Legislative Assembly Member, Maxim Reznik, urged the crowd to fight not only repression, but also the Russian autocracy itself, as the cause of repression, which he compared to the despotic feudal state of Ivan Grosny. “The guys from the Network Case could be any one of us,” he concluded.

In his speech, Ivan Loch, activist of the Marxist Tendency said:

“When the FSB [Federal Security Service] came for the Chechens, many said, ‘they are Chechens, they are all bandits from the mountains.’ After five years, they came for the Muslims, and the same people said, ‘these are the Islamists: think of the veil, the World Trade Center in New York.’ Then they came for the Russian nationalists. I hate Russian nationalists. Among them there are bandits and murderers, but they also arrested innocent people for their political views. Then the FSB came for the anarchists. The same people – I hear the same voices – say: ‘anarchists are idlers, parasites, drug addicts.’ So, tomorrow they will come for you! For you, and for me! Who will protect us?

“We must stand up against this government repression, shoulder to shoulder. But in order to fight it, you need to understand where this monstrous police system against the working people came from. It's simple. When Yeltsin cancelled the election of judges in 1993, and for many years after he delayed the introduction of a jury, why did he do it? The reason is very simple. For months, workers had not been paid. Their families were starving. They lived on potatoes from the field. If the worker wanted to go to the boss to complain, their nerves would not have been able to stand it. What decision would the jury take?

“This was, is and will be. But the bourgeoisie does not want the court to give the workers justice! Therefore, they corrupt the courts and the police. All authorities were corrupted in order to establish their control over property and the working class. To intimidate the working class. To intimidate the people of Russia. That is why big business supported repression against left-wing political organisations and oppressed social groups. They got their wish. Now this colossus of the police state, which grew up on the blood of workers, trade union activists and fighters for national liberation, occasionally eats the capitalists themselves, taking away their property. Now they are thinking about what awaits them...

“Is it possible to overthrow this system? Yes! How? We must firmly say that we stand for the election of judges, against secret courts, judicial secrecy, against military courts, against the police system that exists today in Russia. But the struggle with this system inevitably leads not only to political liberation, it also leads to social transformation in society, because the exploiting state cannot exist without repression. As soon as the repressive regime collapses, it is swept away by the people. And when the people become free, exploitation will disappear, oppression will disappear.

“The prisons will collapse, comrades! We oppose prisons, and stand for communism! While one person is sitting in a cage, another cannot be free! No to prisons!”

At the rally, the father and mother of the defendant Julia Boyarshinova also spoke. 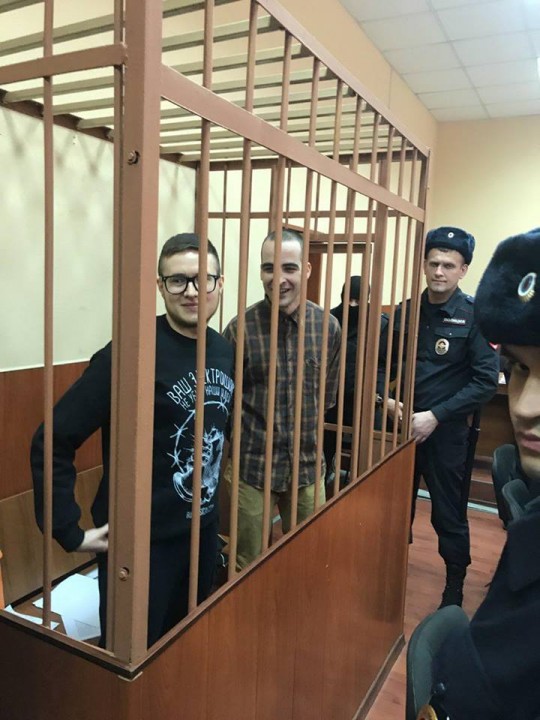 On behalf of the ‘Discourse’ student union, Vladislav Karlov made a request for the speedy release of the defendants in the Network Case, as well as a complete review of the case.

A former member of the Public Monitoring Commission for St. Petersburg, Ekaterina Kosarevskaya, in her speech noted the role and prevalence of torture in the law enforcement system, the need to combat this practice, the role that the PMC plays in this fight. According to Ekaterina, the widely publicised Network Case is of great importance, because if it is not possible to treat the defendants justly and punish the investigators guilty of organising and carrying out torture, then hundreds of accused in less-visible cases will be affected also. Their hopes for a fair trial and the possibility of release are related to the outcome of the Network Case, and therefore our mobilisation is to defend all these defendants as well. Ekaterina Kosarevskaya also called for attendance at open meetings of the Garrison Court on Labour Square One, starting on Tuesday 25 February. The trial in the case of Filinkov and Boyarshinov began on that day at 15:00.

Human rights activist, Igor Gottlieb, spoke about other lawsuits based on “terrorist” articles, and their victims. The left activist Ilya Romanov is now actually being killed, as she has been denied medical care after a stroke in a Mordovian colony. He also spoke about the explosion in the St. Petersburg Metro in April 2017, after which a great number of people whose guilt was unproven were sentenced to huge jail terms. The speaker called for ending the situation when law enforcement officers, especially the FSB, torture people and falsify criminal cases with impunity.

“Together, we will win!”

At the end of the event, a member of the prisoners’ support group, Yevgeny Kulakova, conveyed a welcome address to the rally participants from Yulia Boyarshinova, who was in the FSB prison on Shpalernaya Street; made a request to write letters of solidarity to the prisoners; and then read out a letter from another defendant in this case, Viktor Filinkov:

“The leadership of this entire organisation, and I’m sure that they act in an organised manner, acted inappropriately to the situation. They don't seem to understand that they can't get away with a charade like this in an era of mass publicity. This is the 21st Century. Everyone can see what they're doing and form an opinion. I can’t look behind the scenes, but the people who are there, the people who make decisions, the people with power, steal the future from all of us – not just the kids in Penza. The effect of this case goes beyond the legal sphere. But they are playing with fire. Not that I ever believed in their legitimacy, but I think some of them must be insane!”

At the end of the rally, the participants adopted a resolution, which stated that the Network Case, based on testimony given under torture, shamed the Russian state.

Down with the police state!

Together, we will win!