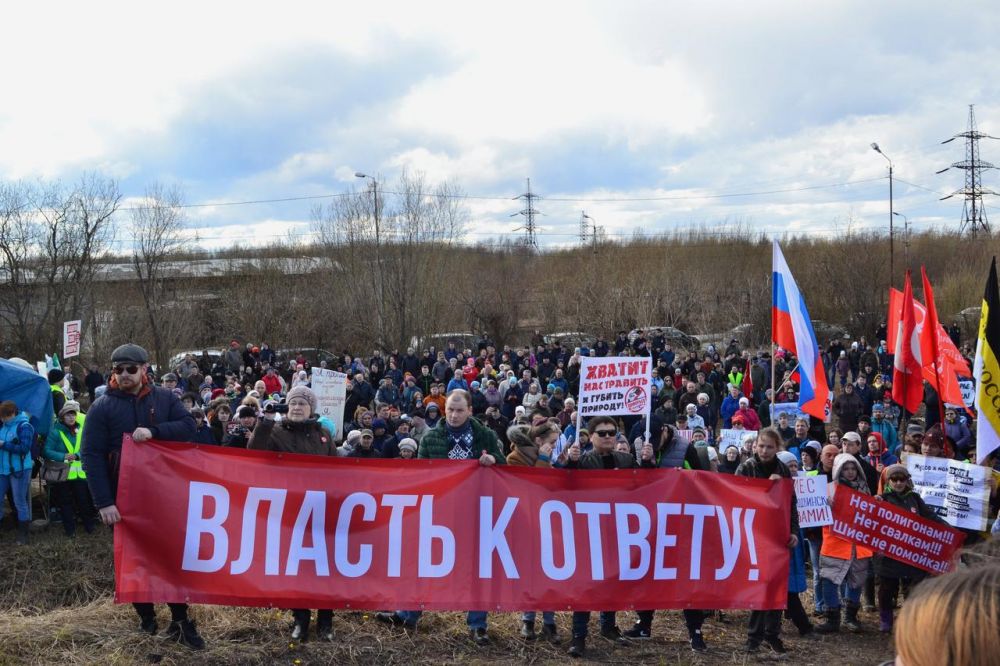 We publish the following report, originally written in July by an activist of the Revolutionary Workers’ Party from Northern Russia. It concerns an ongoing struggle against attempts to illegally construct a waste disposal site at Shiyes in Arkhangelsk Oblast, which would cause grave environmental damage and risk the health of local residents. This is an important development that has gained widespread support and sparked protests across the country.

Perhaps several people in Russia, at some point, have come across articles on the Shiyes protests or heard about them. Yet people still ask: “where is it?”, “what is going on there?”, “why have I never heard about it?”. To address some of those questions, I personally visited Shiyes, and decided to produce an article on it. Of course, this is not the only reason: Shiyes today is a good example to us all of how to fight for our natural rights.

First of all, let us clarify the context and the background of the Shiyes protests. Shiyes is a railroad station and hub connecting various settlements across the North of Russia, located in the Lensky district of the Arkhangelsk region, around 50 km from the Urdoma village and 23 km from the Madmas village (in the neighbouring Komi Republic). The station and its adjacent ghost settlement (also called Shiyes) did not attract much attention until recently; perhaps the only illegal activity happening around those parts was unauthorised logging.

But in the summer of 2018, strange developments began around the station. Construction vehicles arrived and began groundworks as well as other building preparations. Rumours started spreading among the local residents that the planned construction was for a solid waste disposal site. Over the years there have been a spate of local protests in Russia against the imposition of waste disposal sites. Suffice it to say that, after the Moscow government failed yet again to find waste disposal grounds for the city’s rubbish in the Moscow region and Central Russia – due to the residents’ fierce and determined resistance – it struck a deal with the Arkhangelsk regional authorities. The Moscow and Arkhangelsk governments announced the construction of an “eco-techno-park” in the region. The project was declared to be a waste recycling plant.

However, the locals quickly became suspicious, as they realised that what was being constructed at the Shiyes station was simply a solid waste disposal site. The residents began to pressure the authorities to demand some answers about the plans. Local bureaucrats, regional media and federal TV channels responded with a propaganda campaign, claiming that the construction of the waste site will not proceed, or that it will indeed become a waste recycling facility.

But local people were not fooled by such crude disinformation, and they were unanimous in their opposition to the waste ground project (except, of course, for those who stand to profit handsomely from government deals and contracts) and its consequent environmental and health impact. Residents of the Arkhangelsk region and the neighbouring districts of the Komi Republic have been protesting consistently from the summer of 2018. Street meetings, demonstrations and pickets characterised the protests in the summer months of last year. However, the authorities refused to yield to the demands, and the Shiyes resistance has increasingly radicalised in its outlook and methods. By the time of writing [July], the so-called Shiyes Watch – a permanent camp organised by the local protesters directly by the construction site – has been actively maintained and staffed for over half a year.

I visited this camp as an activist of the Revolutionary Workers’ Party from my hometown of Ukhta (Komi Republic). The Northern railroad goes from Ukhta directly to Shiyes and takes around six hours. As the train conductor told me, “the station only works for the protesters. No other reasons to stop here”. Of particular interest was the social outlook and characteristics of the protesters gathered here. Upon my arrival, I met regular workers who care about their land, their region and their country. People from all over Russia had gathered there to protect their land from being poisoned and their health from being ruined by the poisonous smog and other emissions spreading over the North.

I did not know much about the Shiyes Watch, and was impressed by their high level of organisation. First of all, the activists’ presence was dispersed all around the locations where the construction site posed the most immediate environmental threat. In particular, the protesters were concentrated next to the Shiyes station itself, by the Urdoma border, and the areas surrounding railroad tracks. This way, the activists were tactically placed to maintain a number of important “posts” on a 24/7 basis. Some of these posts are tellingly code-named “Leningrad” and “Stalingrad”. Secondly, almost all of the activists are equipped with walkie-talkies and are able to maintain efficient communication, despite the fact that the area has no mobile phone service. And thirdly, the organisation of living conditions in the camp is outstanding. Every post has fires, electricity generators, tents and food storage. One even has a Wi-Fi internet connection! Food preparation is well-coordinated, and portable heating stoves keep the insides of tents actually hot, despite the harsh northern climate.

In #Shies, #Arkhangelsk region, north #Russia, the #protest camp celebrates its first anniversary. The growing landfills are an increasing issue for many Russians who want to live in a better environment: https://t.co/aS2xLgGrA2 pic.twitter.com/Lj0B3knTwO

The protesters’ resistance is characterised by skill, strength and radicalism. Their radical methods stem from the understanding that the construction of the waste site in the area is illegal, and the confidence that they are fighting against the arbitrary lawlessness of the government. Their actions in preventing construction are perfectly legal and peaceful. Once any movement of construction vehicles or attempted delivery of building materials is spotted onsite or by the Shiyes station, the protesters gather at the location concerned and frustrate the actions of the construction workers and the private security company; they record and document all violations, and call the police to the site. This has fully frozen all construction for the past several months.

The activists are also joined by a contingent from the neighbouring Urdoma village, who also maintain their own watch on the Urdoma-Shiyes border. Some of the tactics employed by the workers include forming human shields to block the movement of gas tankers and construction material supplies. Both the Shiyes and the Urdoma protesters fully intend to defend their land to the bitter end. When they are told in Urdoma: “We will run you over!”, they reply: “Go ahead!” When they are told on Shiyes: “We will beat you!”, they reply: “Fine!” There is widespread solidarity and support across wider society, with the perception that truth is on the protesters’ side.

It is also quite notable that the Shiyes issue has even caused rifts within the state apparatus and its armed bodies of men. The Ministry of Natural Resources appears to be gradually moving to the side of the protesters and towards making a case against waste site construction. Furthermore, the police have occasionally taken actions contrary to the interests of the construction companies, such as in a recent episode where police officers arrested a vehicle carrying a gas delivery, headed for the construction site, thus acknowledging that the construction works are illegal. 17 people left the local security organs as a direct result of the Shiyes-Udoma clashes.

The first and most important of the protesters’ demands is to stop the construction of the solid waste site. The second is the resignation of the governor of Arkhangelsk region, Igor Orlov. The third is the resignation of the government and the president of Russia. Not all the protesters actively support the latter demand, but a significant contingent does, and such moods are widespread. The Shiyes movement has enormous perspectives and potential. The sheer experience and skills gathered by activists from across the country in Shiyes will contribute to further protests, be they against waste disposal in the Komi Republic or for the resignation of the government. Such experienced activists will prove valuable among the much-needed, strong, radical leadership in the upcoming events – and in a broader revolutionary perspective.

Socialism the solution to climate catastrophe!

The crisis of the capitalist system is marching across the globe with giant strides, and Russia is no exception. The skeleton of workers’ protest is beginning to grow meat around it, as strikes become more and more frequent. And this crisis could not have but affected Russia’s political reality today.

The diminishing confidence and the ruling party’s falling ratings in the polls – along with that of the president personally – and the upsurge of opposition parties and movements are all characteristics of the present reality of Russian politics. It is against this background that the issue of environmental protests – previously rather low on the agenda of most ordinary Russians – has become one of the most important issues around which the people of Russia will stand, seemingly until the end. Protests in solidarity with Shiyes across Russia are growing in size, especially in the North of the country. Shiyes has served as a great inspiration for local action, with people across the country organising their own local waste sites monitoring. 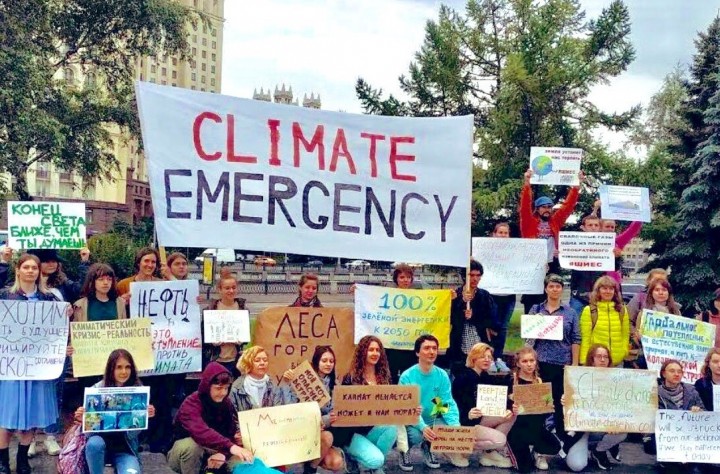 The Shiyes protest has seen a big response across the country / Image: fair use

It would be misguided to declare that the Shiyes protests are inherently “leftist” or “socialist”. They possess a revolutionary spirit, but they also remain a primarily environmental protest. Of course, the political side is strongly present, especially among the demands, but it is hidden under eco-problems. There is even a small echo of right-wing ideas about the “purity of the Russian North”, for example. But we must understand the material reality of the protest movement, its nature and its complexity. And we must certainly reject the sectarians who proclaim that we should “only support clearly left-wing protests”. Today, in the era of indiscriminate reaction, our mission as communists is to be in the midst of popular protests to explain the perspectives from a Marxist point of view. The working class knows how and where to move, and it will learn through experience. Our task is to be with the working class, to extend its outlook and impress the Marxist perspectives and demands upon the developing revolutionary movement, and to be in solidarity, shoulder-to-shoulder with the class, sharing the weight of historical responsibility.

We as Marxists believe that the solution to environmental destruction is achievable only by one means – the destruction of capitalism. The achievement of workers’ democracy, a planned economy and workers’ control over the environmental policies are the necessary instruments for the restoration of environmental balance. These perspectives must be explained to the activists, who often fully understand that the protests are not simply environmental but political in nature, but have not yet necessarily arrived at the conclusion that the answer is socialism. Thus, to raise the red flag over environmental protests is a crucial task for communists across Russia today. The Shiyes protesters – their determination and dedication to the cause – are a shining example for the struggles of the working people across the rest of Russia, and the experience obtained by these activists could be crucial in future revolutionary developments.