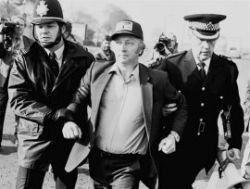 Friday 3rd January saw the release of previously secret Cabinet documents from the Tory government relating to the Great Miners’ Strike of 1984 – 85. The BBC news website stated “Newly released cabinet papers from 1984 reveal mineworkers' union leader Arthur Scargill may have been right to claim there was a "secret hit-list" of more than 70 pits marked for closure.”

For background about the Miners strike please read: Twenty years on - the lessons of the 1984-85 miners' strike

Note the “may have been”! After 30 years the BBC, which famously reversed the footage of the Orgreave police riot in order to blame innocent NUM pickets for the violence seen on the nation’s TV screens, still cannot bring themselves to admit that Arthur Scargill was right - there is no “may have been” about it.

Switching on the television for the early morning news expecting to hear more I was informed that it was the hundredth anniversary of the Brownies! To their credit our local BBC news, Look North, covered the story in some detail and indeed made the statement that Thatcher had lied when claiming there was no hit list of pit closures. All through the Great Strike, and in fact up to the present day, Scargill was pilloried and called a liar; the NUM was branded “the enemy within” by Thatcher; news broadcast after news broadcast labelled us thugs and hooligans: but now SOME of the truth is out – the Thatcher government did have a hit list of 75 pits for closure.

These Cabinet papers reveal that Thatcher in 1983 secretly prepared to take on the miners. A secret Whitehall working group, codenamed MISC 57, was established, which set out the necessary steps that should be taken in the event of a miners’ strike.

Later in 1984 at the time of the strike Thatcher constantly denied any involvement in the dispute, insisting that the government’s only concern was to ensure the rule of law.

The Prime Minister gave her personal approval to a letter in British Coal Chairman Ian MacGregor's name that was sent to every miner's home. In it the Coal Board Chairman said he could state "categorically and solemnly" that Scargill's claim that 70,000 jobs were at risk was "absolutely untrue."

This is a strike which should never have happened. It is based on a very serious misrepresentation and distortion of the facts. At great financial cost miners have supported the strike for fourteen weeks because your leaders have told you this......

That the Coal Board is out to butcher the coal industry.

That we plan to close down 86 pits, leaving only 100 working collieries.

IF THESE THINGS WERE TRUE I WOULD NOT BLAME MINERS FOR GETTING ANGRY OR FOR BEING DEEPLY WORRIED. BUT THESE THINGS ARE ABSOLUTELY UNTRUE. I STATE THAT CATEGORICALLY AND SOLEMNLY. YOU HAVE BEEN DELIBERATELY MISLED.

Chairman of the Coal Board

It is clear that her government did much, much more than that. From the outset the cabinet pressured police to “get tough on pickets” which they did with enthusiasm 11,000 of us were arrested and criminalised, many severely beaten. Courts were instructed to speed up the ‘processing’ of those charged.

A ring of steel was placed around mining areas to prevent pickets reaching working pits. Cars were stopped at motorway junctions and pickets threatened with arrest if they did not turn back.

The NUM’s entire assets were sequestrated when the union refused to pay a £200,000 fine for contempt. This was to stop the union funding the strike and part of the ‘war of attrition’ aimed at starving men back to work.

Thatcher’s own handwritten notes show how she was involved in the tiniest of details, even working out how many lorry loads of coal needed to be moved to break the strike, together with names of ‘moderate’ members of the Transport and General Workers Union who could be relied upon to ‘cool things down’ if solidarity action took place.

Of course none of this comes as a surprise to those of us who were involved. It was obvious that we were up against the whole forces of the state machine. It was out and out class warfare of the most brutal kind.

Learned academics and political commentators have rewritten our history. To believe these ladies and gentlemen, we were engaged in a foolhardy dispute, blindly following a leader to certain defeat when the whole thing could have been settled by clever negotiation and compromise.

The released documents paint a different picture. In July of 1984 the government was so scared of defeat they had 4,500 troops on standby ready to move coal to power stations where stock were rapidly running out and were considering declaring a state of emergency.

The dockers’ strike further terrified the government and Conservative policy chief John Redwood, in a secret memo, warned Thatcher that the ‘far left’ were engaged in a ‘revolutionary strategy’ to ‘destroy’ the government.

In October of 1984, with the threat of a pit deputies’ strike that would have closed even scab pits, plans were drawn up to put in place a three day week to conserve stocks of coal. Further disclosures will show in more detail the steps that Thatcher was prepared to take to ensure victory at any cost.

I, like all my fellow strikers, have mixed emotions about the released papers. It is good to be vindicated in our struggle and to see how close we came to victory at times, but the realisation that such a victory was denied us by the absolute sell out, with a few honourable exceptions, of the Labour and TUC leaders leaves, to this day a bitter taste.

Personal memories have never gone away. I need only to feel the scar on the back of my head to recall the sound and the pain as my head exploded, smashed by a police truncheon on 9th April at Creswell Colliery. I remember fighting to stay conscious and on my feet, scared that if I collapsed I might never get up again.

Dragged to a police van and being told I could ‘bleed to death then’ when refusing to be taken into the pit’s ambulance room - manned by scabs - for treatment whilst waiting for an ambulance. That ambulance taking me to Chesterfield Royal Hospital accompanied by the copper who had coshed me, his uniform, helmet and face covered in my blood, where a doctor, surrounded by detectives was made to sew me up without anaesthetic.

Spending the night in a cell in Chesterfield police station, where, after being told by a doctor that I was severely concussed and needed constant observation, the police decided, instead, to disturb me every 15 minutes ‘to make sure I was still alive’.

After appearing in court the following day, when bail conditions prevented me from going near any British Coal property in the whole of the country, my two young children were exposed to the sight of me being brought home covered in blood.

Later I was framed in court, where despite conflicting evidence, I was found guilty of ‘threatening behaviour’ and ‘watching and besetting’.

I make no apologies for personal reflections. These memories are seared onto my consciousness, as real as any physical scars I carry, together with the knowledge that over 7,000 of my fellow comrades suffered the same fate; in fact with some suffering far worse than me - two were murdered: David Jones and Joe Green.

The infamous police riot at Orgreave resulted in 95 pickets being charged with riot and facing possible life imprisonment. I know, personally, three strikers, loyal to the end, who committed suicide after the strike, one an old friend from school days.

I could list, page after page, experiences and grievances coloured by an anger that is just as strong today as 30 years ago. No secret cabinet papers can give an insight into those. I know that everyone involved in that momentous year feels the same. But alongside the hurt and anger other emotions exist – the joy and pride felt in my fellow comrades who fought like lions against insuperable odds. They were joined by the lionesses of Women against Pit Closures in that fight. Women came out and fought with the same determination and courage as the colliers. Whole communities were united in a battle for their lives.

Support groups were created the length of Britain. Millions of pounds were collected to assist our fight. Rank and file activists in every union filled the voids left by their leaders.

Friendships were forged that have stood the test of time. I am proud to know and to still fight alongside these heroes, most of whom will remain anonymous.

A few need special mention - I regard them as true friends and exceptional comrades. Anne Scargill and Betty Cook, two almost inseparable women, now in their 70s, still grace every demonstration and many picket lines, shaming much younger people with their energy, humour and enthusiasm. Davy Hopper of the Durham miners, a real labour movement giant, together with his late comrade, Davy Guy, has kept the Durham Miners Gala alive and turned it into the biggest and most joyous celebration of working class values in the world. Thanks to them the flame of the North East miners still burns bright.

The Nottinghamshire strikers who faced intimidation and violence on a daily basis, and who had their entire union assets stolen by the scabs of the UDM, all stand tall and proud.

My late brother, Alan, branch delegate at Ireland colliery in Derbyshire, was attacked by scabs in a chip shop and worked over with a chain. Hospitalised and almost losing an eye, the local police refusing to act, even when given the names of the attackers by a number of witnesses, saying instead “it’s time you lot were taught a lesson”. After the intervention of the chair of the Derbyshire police committee, himself a striking miner, they were arrested and charged, only to be let off with fines by a judge who “wanted to heal the rift in mining communities”!

Contrast that with the case of the late Brian Martin, a good friend of mine and fellow Labour councillor - the most gentle of men you could ever meet. He was arrested, framed and mentally tortured in Chesterfield police station where officers threatened to rape his wife. He was jailed - presumably by a judge who wasn’t bothered about ‘healing rifts’ - shortly before those who had attacked my brother were let off; he lost his job and his seat on the council. He never lost his dignity and pride, however. His last act in prison, (where fellow convicts called him and a fellow striker Scargill and Heathfield!), whilst on gardening duty was to plant a bed of daffodils so that they would spell NUM the following year, after his release!

The fight goes on

24 hours after the Cabinet papers hit the news coverage was gone. The chatterati had returned to their armchairs, our moment in the sun was gone. We were returned to the dustbin of history.

But they still cannot dent our resolve. Our industry may be gone, our communities may be devastated and ruined, but we have the memories.
We also have the knowledge, now backed up by those official Cabinet documents that we came so agonisingly close to securing a victory that would have changed society for the better.

Nothing can replace what we have lost, but nothing can take away what we achieved and the lessons we have learned. We got off our knees and fought like no other section of workers has ever fought. None of us would swap the memories of that year for anything.
This year we celebrate, yes celebrate, the 30th anniversary of that strike, unbowed still strong we fight on, secure in the knowledge that we were right!

In the words of Tony Benn "The miners, skilled and courageous men, were treated like criminals by Thatcher. It's a story that will never be forgotten."

We shall make sure of that, with or without secret cabinet documents. Our fight goes on!