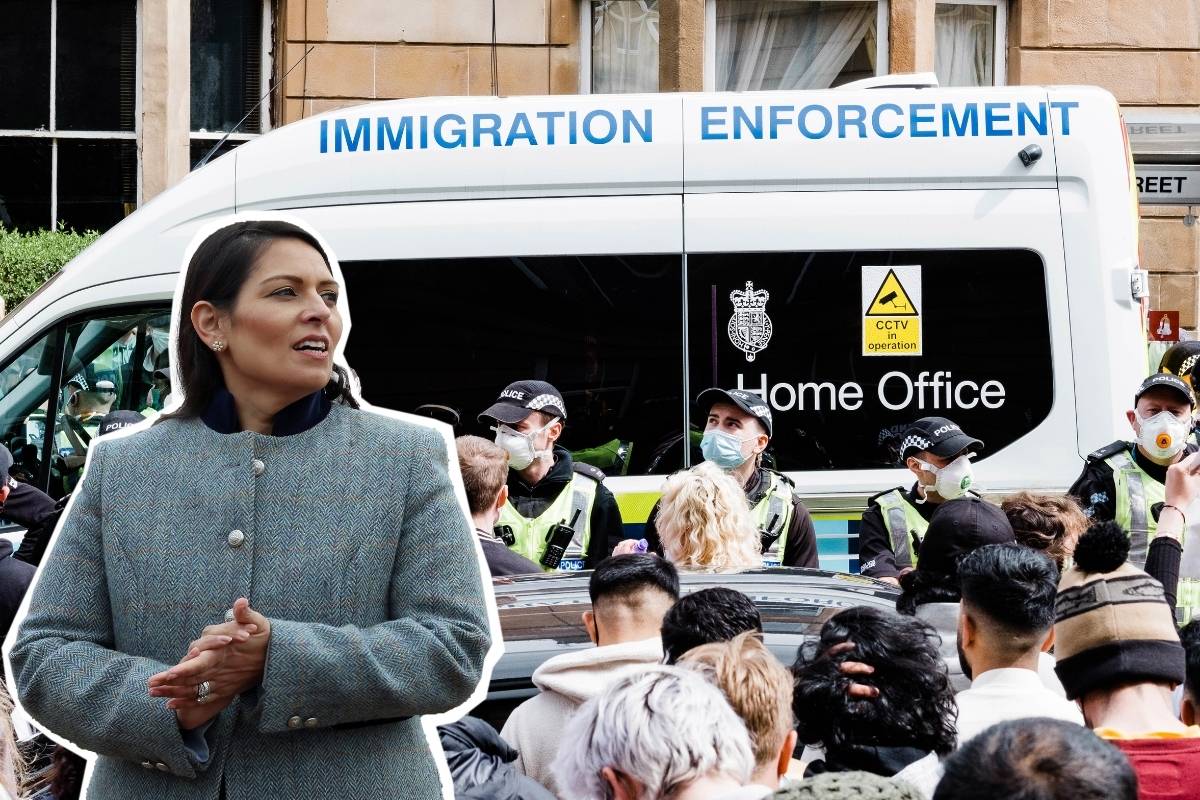 Last Thursday, hundreds of Glaswegians descended on Kenmure Street to defend two men swept up in one of the Home Office’s controversial early-morning immigration raids.

The power of this mass mobilisation inflicted a humiliating defeat on Priti Patel and the Tory government’s racist ‘hostile environment’ policy.

The two men lived in the Pollokshields community, where many were celebrating the Islamic holiday of Eid. Hundreds of local people were incensed by the Home Office’s decision to carry out the raid on such an important day for Muslim families, and suspended their festivities to join the growing demonstration.

The protest began with one local resident instinctively acting to prevent the abduction of two of his neighbours by crawling under the Home Office’s van. Within minutes, a crowd had started to form. And by midday, the street was filled with people demanding the release of the detainees.

A special mention has to go to the guy who upon seeing the Kenmure Street raid threw his bike & himself under the van preventing the Home office thugs from making a quick escape. He lay under there for 8 HOURS.

To Bike Man, you sir are a hero & your brave act inspires us all! pic.twitter.com/i7xg4hT6BU

Families, students, and workers – young and old – stood together, in defiance of the authorities, and in solidarity with the targeted men.

Officers formed a ring encircling the van, while an army of police mustered around the neighbourhood. There was dismay at the nearby Glendale Primary School, as mounted police ominously paraded towards Kenmure Street.

One cop at the Kenmure Street protest is wearing a Thin Blue Line patch. #LetThemGo pic.twitter.com/hl9UMS6HhX

This was taken as yet another insult to the predominantly Asian community, and fears grew that a renegade officer may lash out and cause violent disorder.

As we arrived on the scene, there were rumours circulating that Police Scotland were preparing to kettle the crowd. This certainly would have led to multiple casualties on the narrow residential street.

Though there were some attempts at provocation from the police (including cynically trying to force their way into the crowd with a paramedic in tow, who later calmly walked through), the mood of the protestors remained disciplined and non-violent.

Police Scotland using dirty tactics at #KenmureSt attempting to break into the crowd on the pretext of providing a paramedic. The two detainees have been locked in the back of a van since early this morning. https://t.co/cTeDnyWjUJ

Having seen police in England use any excuse to launch an assault on mostly peaceful crowds during Kill the Bill demonstrations (and then lie about it later), the atmosphere was tense. Legal aid information was passed around, and food and water was delivered in case protesters became trapped.

Residents on the street hung signs from windows and shouted their support. Some even opened their doors to allow people to use the bathroom, or as a possible escape route from police attacks.

The protest was bold and defiant, with chants of ‘let them go!’, and demands for answers from Police Scotland.

Supposedly, it is Scottish government policy for Police Scotland not to assist the Home Office in immigration raids – yet they were present in extreme force.

Confusion reigned. Both Nicola Sturgeon and Justice Secretary Humza Yousaf – also MSPs for the area – publicly criticised the raid and voiced support for the protest. Yet the police were not stood down.

Yousaf and the First Minister were apparently trying to get in touch with the Home Office about the situation. But not one Tory minister responded.

This UK Border Force Operation, in Polloksheilds, the heart of the Muslim community, on Eid is a demonstration of the UK Govt's hostile environment.

I have asked to speak to the Home Secretary to gain further details & make clear just how unacceptable this situation is. https://t.co/lKzZv1yvhl

In the late afternoon, it was announced over a speaker that the police would retreat and release the two detainees. The crowd was jubilant – though sceptical of the police’s promise to withdraw if the crowd dispersed.

Human rights lawyer Aamer Anwar negotiated that the detainees be released into his care and escorted to the nearby Madrasa Taleem ul Islam on Nithsdale Road.

One officer became argumentative about this plan, and the crowd lit up when Anwar told him loudly to “shut up for one minute”.

We waved to children in the flats overhead, while awaiting the moment the van doors opened and the Home Office’s captives were seen for the first time – images that have been viewed across the world.

What a beautiful show of solidarity in Glasgow today. Physical resistance of an immigration raid. anti-racism in action. When we mobilise, when we shut shit down, we win.pic.twitter.com/2USVv5pI3k

Though there was still an overbearing police presence, the short walk to the Madrasa was like a triumphant parade. The crowd was led by a red flag, befitting this stand against racist state intimidation in one of Glasgow’s working-class communities.

All felt the sense of victory when Sumit Sehdev and Lakhvir Singh stood on the steps of the Madrasa, thanking the crowd for securing their freedom.

This ‘Battle of Kenmure Street’ was a blow to the Tories’ racist immigration regime – they have already begun to complain of ‘mob rule’ in Glasgow.

To borrow a quip from another activist, let us then quote James Connolly: “All hail to the mob, the incarnation of progress!”

Above all, last week’s action by broad swathes of Glasgow’s working class has inspired thousands – if not millions – to see the power of mass mobilisation and how it can defeat the capitalist state.

We say: End all immigration raids, detention, and deportations! For mass working-class action against the Tories and their hostile environment! Fight the Tories with socialist policies!