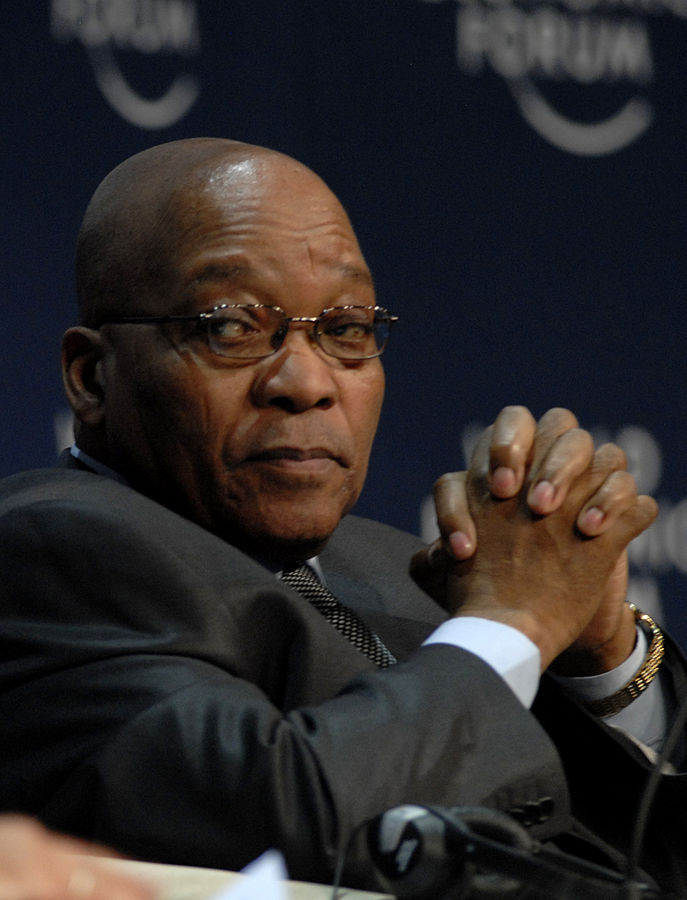 At his annual State of the Nation Address (SONA), South Africa’s president  Zuma made a song and dance about embarking on a programme of “radical economic transformation”. At the time we explained that this was actually a ruse. What he was actually embarking upon was an attempt to promote the interests of the emerging parasitic black bourgeoisie around the Gupta family at the expense of the black working masses.

At the SONA, Zuma announced 2017 as the year of “radical economic transformation”. He was backed in this by the faction in the ANC which is close to the crony-capitalist wing of the ruling class. In the debate Gugile Nkwinti, the Rural Affairs and Land Reform Minister went so far as to actually propose land expropriation without compensation. Others in the Zuma clique followed suit and ratchet up the “revolutionary” and “radical” rhetoric.

But all of this fell flat just a few days later when the Economic Freedom Fighters completely outflanked them. On Tuesday, 28 February the EFF took the Zuma-clique at its word and tabled a draft resolution in parliament to amend the Constitution to allow for land expropriation without compensation.

In the current context of South Africa this is a very “radical” proposal. Although the motion of the EFF was aimed at addressing land ownership, it affected Section 25, the infamous “property clause” of the Constitution, which is the final product of the CODESA negotiations in the 1990s between the ANC leaders and the apartheid regime. At those negotiations, “sunset clauses” were introduced in the interim constitution which guaranteed private property ownership, this ultimately saved Capitalism from being overthrown in South Africa.

Leading the debate, EFF leader Julius Malema told the House that the EFF was offering its 25 votes in the Assembly “without conditions” to the ANC’s 62 % to get the two-thirds necessary to amend the Constitution to allow the motion to pass. He called Zuma’s bluff: “So, those who now claim to be radical enough and who want radical change should actually be in the forefront in agreeing that the Constitution must be changed to make it possible for our people to own the land,” he said.

He also said it was “not right” that 10% of the population owned 75% of the land. He also said that the ANC sold out when it negotiated the Constitution in the 1990s. “We all know that the Dutch gangsters arrived here and took our land by force. The struggle has since been about the return of the land into the hands of its rightful owners.”

The faces of the ANC MPs painted a picture of embarrassment. After all the “radical” talk over the last few days they were now put on the spot. Then the embarrassment got worse. Having been caught out, the ANC MPs were now forced to come up with reasons why they could not support the motion.

ANC MP and chairperson of the Portfolio Committee on Rural Development and Land Reform Phumzile Ngwenya-Mabila took things to a new level. She said that the ANC could not support the motion because it was “unconstitutional”! The embarrassment turned into a farce. The whole point of the motion was to change the constitution to make land expropriation without compensation legal. This seemed to be loss on the MP.

Just when you thought it could not possibly got worse, she informed us of this piece of advice: “We need to respect and uphold the Constitution as members of this country and members of this House.” Ngwenya-Mabila clearly did not see the irony in all of this: not so long ago the Constitutional Court found Members of Parliament have violated the Constitution in when they failed to hold Zuma and the Executive accountable for the public money which were used for Zuma’s house at Nkandla.

The bourgeois parties naturally came out strong against the motion. Pieter Groenewald of the Freedom Front Plus, which is the posterboy for the arrogant landowning conservative Afrikaner rightwing tried to rewrite the brutal history of dispossession of the African masses by suggesting that the white expropriators “worked hard” and “paid” for the land. All of this is very predictable of course. The landowners, capitalists and their representatives in parliament will of course oppose any attempt by the oppressed to change society.

All of this is to be expected. But what is not expected is that they will be aided and abetted by the supposed “vanguard of the working class.” This is exactly what happened. Public Works Deputy Minister and ANC MP Jeremy Cronin, who is also the First Deputy General Secretary of the “Communist” party leaped to the defence of the property clause with a zealousness that was only rivaled by Pieter Groenewald.

He said that the problem is that land reform was “too slow” and all that was needed was for the ANC be “better” at implementation. All of this should be done within the confines of the Constitution. He defended the CODESA negotiations in the 1990s and then said that the ANC has undertaken that "unconstitutional deprivation must never happen again to anyone in the country.” This is a true gem! The main theoretician of what is suppose to be a communist party is vowing not to support any attempt to undermine the bourgeois constitution against whatever “deprivation” might occur in the future. So when the working class of South Africa move in a revolutionary situation to overthrow the rule of the capitalists, do not count on the support of the chief ideologue of the “communist” party.

But that is not enough. Cronin continued:

“The ANC does not agree with any notion of the country expropriating land without compensation. We believe that just and equitable compensation is the solution in resolving the land question in South Africa, like in other African Countries such as Lesotho, Zambia, Malawi and Namibia. The land question must be addressed in a manner that will unite South Africans and not done haphazardly.”

So not only does Cronin not support land expropriation without compensation, he actually has an idyllic vision that the land question should be able “unite South Africans!” Talk about Utopia! The fact that these words should come out of the mouth of a “communist” is astonishing and we should ask what has happened to comrade Cronin’s conception of class society?  We could also presume that a model for this “unity” is the Cronin-Groenewald model we witnessed in parliament. That is, a unity where the the leaders of the workers movement unite with the capitalist class in order to defend the right of the capitalists to exploit and oppress the working class.

This is of course truly scandalous, but it is no surprise. Cronin has always defended the scandalous betrayal at CODESA. But it is particularly outrageous at this present time when all the contradictions of the CODESA negotiations are exploding one-by-one into a full-blown crisis affecting the black working class. The only solution is to undo CODESA, expropriate the capitalists and carry out a Socialist revolution, something “communist” Cronin is wholly opposed to.

After Cronin’s remarkable input, Malema closed the debate by launching a scathing attack on the ANC MPs. “We want to make it clear that we made available  [our votes]  to the ANC. South Africa has now seen you for what you are. You are a walking contradiction... You never mean anything you say. Your narrative on radical economic transformation is just rhetoric. You don’t mean it. You don’t even know it.”

The statement of the EFF later said:

“The EFF is pleased to have exposed the deception and contradictory nature of the ANC once again today in Parliament. The ANC, again refused to implement an aspect that is essential to radical economic transformation; amend the constitution to allow the Expropriation of Land without Compensation. This is undeniably a vital route towards radical economic transformation.”

This exposes the ANC as both a hypocritical bunch whose public pronouncements have nothing to do with their parliamentary commitments. Today's rejection of the EFF's motion indicates that Zuma does not speak for the ANC collective, he does not command it, neither does it listen to him.”

In the end all the bourgeois parties united with the so-called “communists”to defeat the motion. But that was always going to happen. The real point was to expose the hypocrisy of the ANC leaders.

The Zuma-clique in the ANC and their backers of the upstart black bourgeoisie thought they were clever by latching on the slogan of “radical economic transformation.” In the end they are left with eggs on their faces. This is yet another example of the disjointedness of the ANC. The party is riddled with factionalism and infighting. Different wings of the party are being backed by rival cliques who are all backed by rival interests. In the past the party thought that its multi-class nature was its biggest asset. But now that the crisis of capitalism is weighing down on all classes, the party is entering a crisis. It is impossible to unite the opposing class interests of the workers and the poor with those of the capitalist class. In addition to this the crisis of capitalism has pitted rival factions  of the ruling class against each other. What we are currently witnessing is a two-way breakup of the ANC, first along class lines and secondly between rival factions of the ruling class.

Marxists of course support the call for land expropriation without compensation. However, unlike the way Malema presented the issue, we do not see it merely as a matter of historical redress. Land is an economic necessity and land reform is vital for the future economic development of South Africa. However, we have to point out that South Africa is not a poor peasant country. In fact, the share of agriculture in the economy is only about 2.5% The economy uses the most modern machinery in the agricultural sector and is a net exporter of agricultural produce to the world market. It has a relatively well developed economy with large secondary and tertiary industries and two-thirds of the population lives in big cities and belongs to the working class.

In addition, this is not smallholding or peasant land we are talking about. It is mortgaged land which is being bought and sold on the open market. This means that the question of land ownership is inextricably linked to the banks. In essence it is the big banks and giant insurance companies which are really calling the shots. Therefore the question of comprehensive land reform and land expropriation is tied up with the question of expropriating the banks and the economy in general.