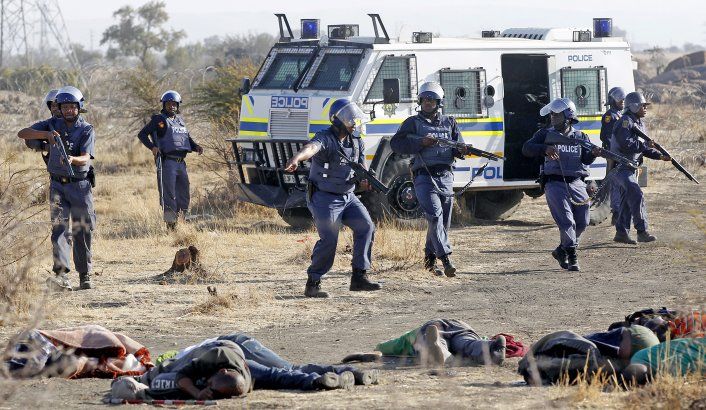 The fatal shooting of 34 striking miners at the Marikana mine near Johannesburg has met with outrage. A crowd of defiant strikers were gunned down in cold blood in a hail of police gunfire that brought back memories of the Apartheid era, of Sharpeville, Soweto and the struggles of the 1980s. A further ten people have been killed prior to this massacre and 234 have been arrested.

Following months of strike action, the management has refused to negotiate, adding to the frustration of the workers.

Hundreds of heavily-armed police have surrounded the mine, patrolling in small convoys of vehicles and conducting aerial surveillance by helicopter.

The mine’s 3,000 miners have been on strike over pay, but have been met with intimidation by the mine-owners, the multi-national Lonmin. The mine is the world’s number three platinum producer with its offices in London. The owners have threatened the strikers with the sack if they do not immediately return to work. However, three-quarters have stayed away despite the ultimatum.

The workers are demanding from Lonmin a wage increase from 4,000 rand (£300) to 12,500 rand a month. The strike was called by the rock-drillers, the men who work right down at the rock face, who have to work with a 25kg drill that vibrates wildly for the duration of an eight-hour shift. When there is a rock fall, it is generally the drillers who are the victims, who lose fingers or lives. It is the most dangerous job in the business. That is why they are determined to fight.

Striking miner Kaizer Madiba said “People have died already so we have nothing more to lose … we are going to continue fighting for what we believe is a legitimate fight for living wages. We would rather die like our comrades than back down.”

A rock-driller also said: “It's better to die than to work for that shit … I am not going to stop striking. We are going to protest until we get what we want. They have said nothing to us. Police can try and kill us but we won't move."

President Jacob Zuma has called for an investigation into the killings, while urging calm and for no blame to be placed on anyone.

Behind the strike is resentment between the moderate National Union Of Mineworkers and the rival, more militant, Association of Mineworkers and Construction Union (AMCU), a split-away led by expelled members of the NUM. AMCU has accused the NUM of caring more about politics and personal enrichment than workers in mine shafts.  NUM has certainly provided a series of top leaders for the ruling African National Congress. Cyril Ramaphosa, former NUM leader, ANC General sec and now a millionaire businessman, is sitting on the board of directors of Lonmin.

The strike is likely to damage the ANC and its allies by laying bare workers’ anger over enduring inequalities in Africa’s biggest economy. The end of Apartheid and the ANC government has not solved the problems of the masses. To date 40% of South Africans live on less than 2.50 USD per day.

Julius Malema, ousted ANC youth leader, has become a point of reference for a growing opposition, by telling a mass meeting of cheering miners at Marikana that Zuma was more interested in protecting mine owners than workers.

“The British are owning this mine,” he said. “The British are making money out of this mine ... It is not the British who were killed. It is our black brothers. But it is not these brothers who are mourned by the president. Instead he goes to meet capitalists in air-conditioned offices.”

Malema was expelled this year as president of the youth wing of the governing African National Congress after falling out with Zuma, whom he accuses of failing to challenge “white monopoly capital”.

“President Zuma said to the police they must act with maximum force. He did not say act with restraint. He presided over the murder of our people and therefore he must step down. Not even apartheid government killed so many people ... From today, when you are asked ‘Who is your president’, you must say ‘I don't have a president’.”

Malema’s calls for the nationalisation of the mines have been gaining ground, especially after events in Marikana, and the increasing discontent.

“Lonmin treat us like dogs,” said Thembelani Khonto, 24. “When you're underground, it's like you're a slave and they don't know you.”

Siphiwo Gqala, 25, said he sometimes spends up to 14 hours a day underground but does not receive overtime pay. “It's dangerous work,” he said. “Sometimes you go down there and a rock falls and you die. Big vehicles can come and kill you." Recalling the massacre, he said: “I’ve never seen something like that: people killed like chickens. One of my friends is still missing. I don't know if he's in the hospital or the mortuary.”

Scandalously, the trade union leaders of COSATU, as well as the South African Communist Party, have condemned not the violence of the state, but the new “split-away” union, AMCU. The SACP has gone as far as to disgracefully call for the arrest of these union leaders!

While the police opened fire on the strikers, the Morning Star (17/8/12) attempted to blame the strikers by saying, “It remains unclear what sparked the miners' fatal charge at police.” This from a paper that is supposed to stand on the left!

Without equivocation, we must condemn this brutal and murderous attack by the South African state on striking miners. We must also give our support to those strikers in their fight for a living wage and demand the nationalization of the mines as a step towards the nationalization of the economy. This was the policy of the ANC’s Freedom Charter. It is high time the governing ANC, instead of bending the knee to big business, put the Charter into practice.