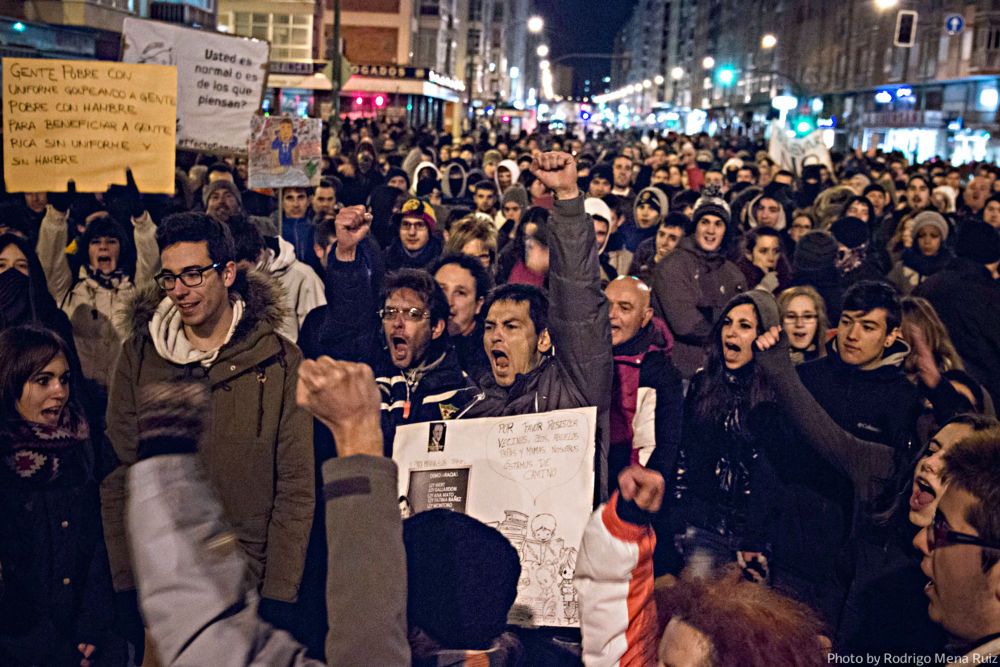 As we enter the second half of the ruling Popular Party term of office, we witness a change of mood in the working class and other layers of society: one which is more resolute, firm and militant. A certain element of fatalism and helplessness permeated the year 2013 thanks to the inability of the mass movement to defeat the reactionary policies of the PP. This is now being overcome.

Since the autumn there have been a series of struggles and events bringing about this change of mood: the all out teachers' strike in the Balearic islands against attacks on Catalan language and education cuts, the heroic all out strike at the Panrico factory in Santa Perpètua de Mogoda (Barcelona), which continues after more than 3 months; the extraordinary strike by Madrid council street sweepers and gardeners, who defeated plans to cut wages and lay off staff; the high profile struggle by workers at Radio Television Valenciana, which occupied the regional TV installations and broadcast under workers' control for a month.

Starting with these events, we saw the unleashing of dozens of defensive labour struggles across the country with the same feature as those described above: the use of the indefinite all out strike as a weapon of struggle, something which is not usual in our country. Many of these struggles, taking place in difficult conditions of economic crisis and employers on the offensive, are being settled with partial or full victories, defeating mass lay-offs and savage cuts in wages.

While the leaders of UGT and CCOO trade unions are hiding in their offices, rank and file shop stewards in these workplaces, and other workers who risk their future and that of their families, are giving a lesson in how to face up to employers.

The culmination of this process at the moment - another major milestone on the road - has been the victory of the wonderful popular struggle of the working class neighbourhood of Gamonal (Burgos), the first major victory against urban speculation and corruption through mass struggle. The struggle involved mass demonstrations and daily assemblies, heavy clashes with the police and brutal repression and arrests, in which the unemployed youth played the leading role.

A toughened up working class

All this has not been a bolt from a blue sky. It is part of the process of experience and increased awareness of workers in this phase of Spanish organic crisis of capitalism.

Between 2011 and 2012 we witnessed the largest mass protests since the fall of the dictatorship, including two powerful general strikes and the extraordinary movement of the indignados (the outraged). But these demonstrations generally exuded a certain "softness" and naïvety, the idea that a massive presence on the streets, on its own, would be enough to stop the government's attacks.

But the crisis is too deep. The debts of companies, banks and State are colossal. The bourgeoisie and its government will not make any serious concession unless they feel the threat of a movement which could sweep away their whole system. For this reason, those initial protests reached their objective limits, under the given conditions and lacking a clear direction of where to go next. In 2013 there were notable examples of popular mobilization, such as the anti-eviction movement, the education sector strikes and the health sector movement against privatisation in places like Madrid, but the general trend was one of a decline of the mobilisations.

Meanwhile, the explosive discontent has continued to accumulate, as there is a growing rage at the impunity for corrupt state institutions and the insolence of the government in curtailing social conquests of the past and basic democratic rights.

Now, the conclusion which begins to appear to workers is: we must fight back with the same determination of our enemies. The realisation of this is is not by chance. The labour reform introduced by the PP government removed some legal instruments that slowed or hindered the most predatory capitalist tendencies in the pursuit of profit. Now, many employers are making full use of the new legal framework to dismantle workers' gains and lower wages by 10%, 20%, and up to 40% in some cases. Blocked in the legal field, workers are being left with the only option of going for broke, throwing themselves in the most stubborn and tenacious struggle, with no room for fatalistic moaning. Hence the proliferation of indefinite strikes.

What we see, therefore, at the beginning of this year 2014 is a hardened and more thoughtful working class, which knows they are risking everything, their livelihoods and those of their families.

There are already clear political consequences of this situation. The PP is divided, with small splits to its right (the newly set up Vox party) and a constant shedding of votes to the reactionary demagogues of UPyD. Its ratings in the opinion polls are sinking in all the regions, particularly in those where they had enjoyed a solid majority for 20 years or more (Madrid, Valencia, Baleares, Murcia). As things stand now, the PP would lose a general election, surpassed by the joint votes of the social-democratic PSOE and United Left (IU).

Now the government is drawing the conclusion that the way of regaining it social base is by enhancing its most reactionary profile, by, for instance, launching an assault on abortion rights. Precisely the opposite is true, as the bourgoies mouthpiece El Pais pointed out in its editorial on January 2, entitled "Creating problems". It argued against the "unnecessary" social tension generated by a reactionary attack on abortion rights, which would be reduced to the minimum expression in cases of rape or serious physical or mental health of the mother.

The government wants to console itself (and console us) by saying that the crisis has come to an end and that there is the beginning of a recovery in economic activity.

Although the rate of destruction of productive forces came to a halt in the last part of the year, overall GDP fell by 1.2% in 2013, and it is expected to grow less than 1% in 2014. What we have, then, can be better described as stagnation rather than growth. In those conditions, will there be any improvement in 2014 in terms of employment, wages, education, health or housing?

It is impossible to move an inch in these areas without putting an end to austerity policies and cuts in social spending in order to prioritize debt payments. Despite all the cuts, the national debt is still growing. 2013 began with public debt equivalent to 84% of the wealth produced (GDP), €884 billion, and ended up with a debt to GDP ratio of 94.2%, €965 billion. By the end of 2014 it is expected to reach 100% of GDP, €1.02 trillion. Therefore, cuts and austerity will continue.

The income gap between management and workers continues to widen. According to the study by the EADA Business School and ICSA consultants, CEO pay rose by 6.9% in 2013, while that of middle managers fell 3.8% and that of salaried workers fell by 0.4%.

Companies and banks continue to allocate the bulk of their profits to deleveraging, devoting few resources to investment. Credit is at a record low. It is impossible to have significant growth of the Spanish economy, even more so in an international context of stagnation, because the crisis is global.

However, the fact that after 5 years of intense destruction of productive forces and employment, a temporary respite, albeit weak, with a small reduction in unemployment, acts as a positive factor for the working class, creating better conditions to fightback, as we are already seeing, and giving a boost to class struggle in general.

The policies of economic terrorism unleashed against working families since 2008 have placed the Spanish state as the second most unequal country in Europe, behind only Latvia, according to the European Statistical agency, Eurostat Union. While in 1976, the president of the third largest Spanish bank earned eight times more than the average employee, now he earns 44 times more (El País, January 5). Another recent study by Intermón Oxfam notes that the richest 20 Spanish billionaires accumulated a fortune of €77 billion, more than the combined income of the poorest 20% of the population, 9 million people!

According to Caritas charity, the number of Spaniards attending their services (soup kitchens, hostels, etc) has gone up from 370,000 to 1.3 million so far during the current crisis.

All this means that there is much accumulated combustible material, and any spark - like for instance the recent events in Burgos - can blow it up at any time. Even a clear defeat of the PP in the forthcoming European elections, openly showing its weakness and lack of social base, could ignite such an explosion. Therefore, the entire stage is set for a leap in consciousness and mass struggles this 2014.