Spain
Share
Tweet
After six months of struggle, 18 days of strike action and on the first day of their all out strike for a reduction in working hours, the bus drivers of Barcelona have achieved an important victory. And they won as a result of their united mobilisation, based on mass workers' assemblies taking all decisions, and coordinated through an elected committee.

After six months of struggle, 18 days of strike action and on the first day of their all out strike for a reduction in working hours, the bus drivers of Barcelona have achieved an important victory. And they won as a result of their united mobilisation, based on mass workers' assemblies taking all decisions, and coordinated through an elected committee.

The struggle of the Barcelona bus drivers started on November 21, 2007 with a 5-hour strike. The main demand of the workers was to have two days rest a week. Currently, the drivers work six days a week, with a total of 251 days a year, when most other workers work an average of 228 days a year. They further demanded that this extra day of rest a week should be introduced with no loss of pay and no increase in the working time during the rest of the week. 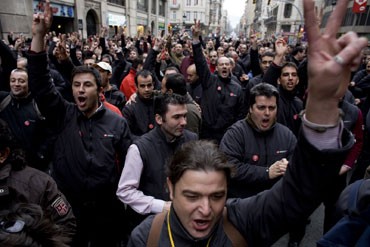 The origins of the struggle can be found in the signing of the previous collective bargaining agreement on the part of the main unions, UGT, CCOO and SIT, despite the fact that the drivers had rejected it in a ballot.

As the workers explained, having only one day of rest a week has had a serious impact on the family life of the workers, particularly in such a stressful job as driving a bus for more than seven hours a day in a big city like Barcelona. Furthermore, because of the way the rosters are organised, a driver could be away from home for more than 11 hours a day, having worked two shifts and started and finished work in four different points of the city.

Fed up with this situation and with no answer forthcoming from the union leaders of UGT, CCOO and SIT, the workers, with the support of the CGT and ACTUB, took up a clear demand, "Two days", and started to struggle for it by setting up a democratically elected "Committee for Two Days Rest."

The whole movement was conducted in the best traditions of workers' democracy and militancy. The meetings of the elected committee were regularly advertised and their proceedings were open for all drivers to observe. All decisions (on strike action, negotiations, etc) were decided democratically by the drivers in mass assemblies which took place on strike days to allow all to attend. Decisions were taken through a show of hands after all workers had been allowed to speak and express their views. 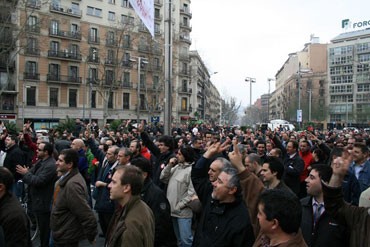 The struggle was faced with a vicious campaign of attacks on the part of the bourgeois media, the Barcelona local council (run by a coalition of the Socialist Party, the Catalan partner of United Left - ICV, and the Catalan Left Republican Party) and also the leaders of the main unions UGT and CCOO who played a strikebreaking role.

During the strike the workers refused to accept the "minimum services" dictated by the company, which were designed to make any strike completely ineffective, and implemented what they themselves considered to be "minimum services". As a result there were clashes between the Mossos d'Esquadra regional police, the workers and a small minority of scabs. During the strike 24 members of the committee were suspended from their jobs and pay by the company, and proceedings started against another 30 activists. It was clear that the company, the council, the trade union bureaucrats, the ruling class through their media, could not allow this struggle to win. It was not just the question of the concrete demand of the workers, two days rest a week, but the militant and democratic way in which the movement was organised.

The mass meetings through which the conflict was organised were a model of workers' democracy (see video). The leaders of the UGT and CCOO, who opposed to the strike, were always allowed to speak and they did so on a number of occasions. The members of the committee were always careful to distinguish between the leadership of these unions and the rank and file members who also participated in the movement in a massive way. The committee had no authority to sign any agreement with the company; any proposals had to be ratified by the assembly. These were meetings of the whole workforce of 1500 drivers. On one occasion, on February 12, the trade union meeting hall that had been booked proved to be too small for the size of the assembly and the workers went out onto the street, stopped the traffic and held the assembly out in the open. 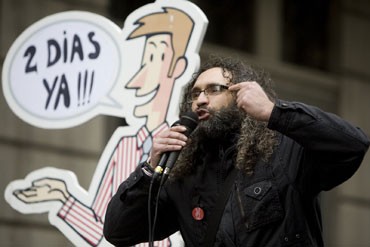 The strikers also took care to appeal to public opinion directly, organising several demonstrations in solidarity with their demands, with turn-outs of between 5,000 and 10,000 people, issuing leaflets aimed at the bus passengers, appealing to the Federation of Neighbourhood Associations, the rank and file members of the Socialist Party, etc. The School Students' Union (Sindicato Estudiantes) played its part in organising solidarity by holding meetings in schools and universities, even though the Catalan regional government (run by the same left-wing coalition as the Barcelona municipal council) issued instructions to all high schools not to allow bus drivers to attend and address these meetings.

Finally, faced with no clear response from the company, the workers voted overwhelmingly to start an all out strike on April 15. It was only as a result of this threat, and on the first day of the strike, that the company was finally forced to make serious concessions.

The workers have won a written commitment that they will get two days rest with no loss of pay. This will be part of the next collective bargaining agreement which will be negotiated in May. With immediate effect they won a reduction of 25 minutes of work every day. This agreement will mean the reduction in the number overall annual working days from 251 to 225, and will force the company to hire 175 additional drivers. The mass workers' assembly on April 15 ratified this agreement, but still conditioned the end of the strike to the lifting of all suspensions and sanctions against the activists. When the company finally agreed to this, the strike ended. 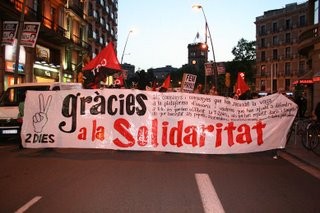 The workers still held a massive victory demonstration, under the slogan "It was because of solidarity", to thank all their supporters. The assembly also made a point of thanking all those organisations that have shown them solidarity, including the Students' Union and the El Militante, the International Marxist Tendency in Spain. The manner in which the agreement will be implemented means that not all the demands of the drivers were achieved. But as the committee stated in the balance sheet of the movement that it published: "we have shown that when the workforce remains united and takes decisions in assemblies, despite all differences of opinion, the spirit of class solidarity and collective struggle reappears amongst us". And they add: "With our struggle and the way we have organised and taken decisions, we can say that we have dealt a severe blow to the corrupt trade union leaderships which have damaged us so much over the years in collective agreement after collective agreement".

This victorious movement shows that only through determined struggle can the workers advance and it also answers all those who say that the working class does not exist, or that it has been transformed beyond recognition, that militancy is a thing of the past. Struggle pays!

Video of the demonstration on April 16