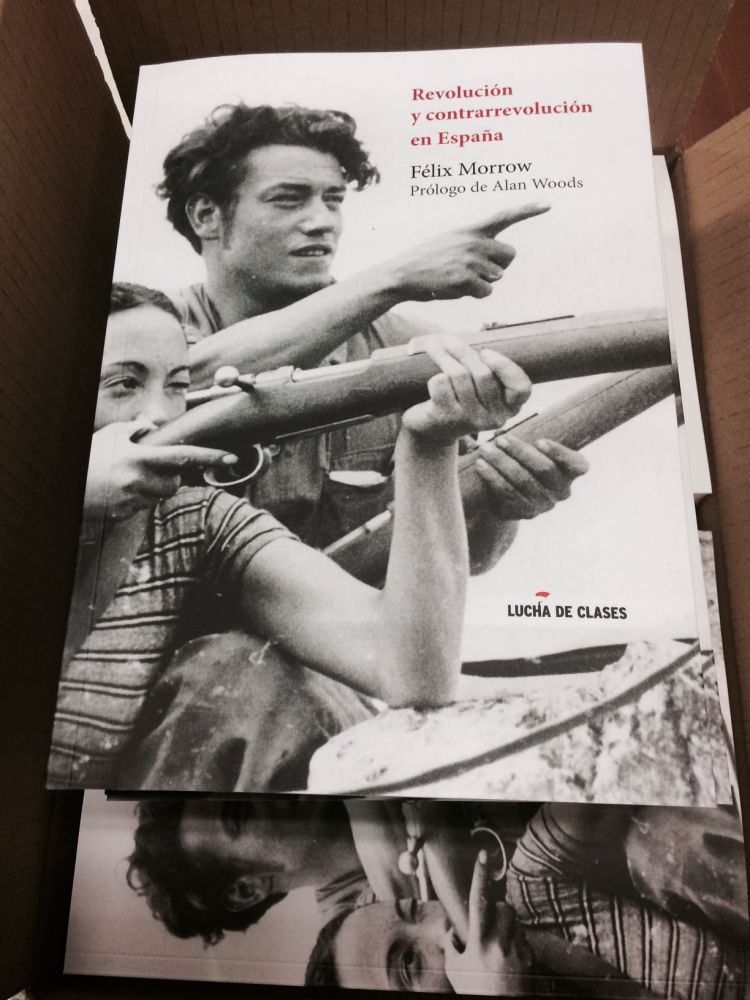 The recent campaign to launch the new edition of Felix Morrow’s Marxist classic on the Spanish Revolution of the 1930s Revolution and Counterrevolution in Spain, just published by Lucha de Clases (Class Struggle), was a great success. Around 300 people attended the launch events organized in three cities (Madrid, Malaga and Vitoria) to hear Alan Woods speak.

A great success in terms of numbers participating and sales

Undoubtedly a key factor in the success of this book launch was the presence in the events of comrade Alan Woods, the editor of the website In Defence of Marxism and leader of the International Marxist Tendency. Alan was the main speaker and and is the author of the foreword for the new edition.

The publication of this book by the Lucha de Clases tendency is no accident. It is not only the best Marxist analysis written about the events of the Second Republic, the Spanish revolution and the Civil War, but also provides enormous lessons for today, which helps us to understand and apply the lessons of the past to our recent history. That applies not only to the regime established by the so-called “Democratic Transition” of 1978, which is currently in crisis, but also to the present situation and the revolutionary perspectives that are opening up in our country and internationally.

In Madrid, more than a hundred people participated in three vibrant meetings to launch the book, on 6th and 7th November. The first event was held in the “Traficantes de Sueños” bookshop in Lavapies in central Madrid. The next morning there was a meeting at the Faculty of

Philosophy at the Complutense University of Madrid, and the last meeting was held the same evening at the Agora Republicana in Getafe. There was also an invitation to present the book at the Faculty of Political Science, in the Campus de Somosaguas, but we were forced to decline it because of lack of time, as comrade Alan Woods could only stay two days in Madrid and his schedule had already been fixed.

We had to organize these events at fairly short notice, since the venues for the Madrid meetings were only confirmed one week before, which limited our scope for advertising them. Despite this, we are very pleased with the participation, with more than a hundred attending: 35 in Traficantes de Sueños, 45 at the Faculty of Philosophy and 25 in Getafe. We wish to give special thanks to Professor Carlos Fernández Liria, who is not only a great academic authority in the university but a politically engaged left-wing intellectual. Carlos very kindly agreed to speak alongside Alan Woods at the book launch in the Faculty of Philosophy.

We might mention in passing that while we were leafleting at the Faculty of Political Sciences to announce our event at the Faculty of Philosophy, we came across comrade Juan Carlos Monedero, one of the main leaders of PODEMOS, heading for one of his classes (he is a university lecturer). He was very friendly, took our leaflet and asked us to convey his greetings to Alan Woods who he knew from one of his meetings last year in Venezuela.

As a result of these meetings, many people gave us their personal e-mail addresses and phone numbers, expressing interest in participating in future activities and public events of the IMT. 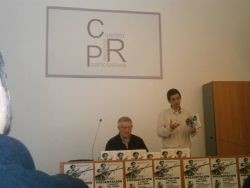 On 11th and 12th November Alan spoke in two meetings in Malaga. The first took place at the Centre for Participatory Resources on Tuesday 11th in the afternoon. Unfortunately, our meeting coincided with an important major meeting of Left activists, an assembly of Ganemos Málaga, which is trying to form a unitary electoral platform for the municipal elections next year. Nevertheless, there were about 30 in attendance.

On Wednesday November 12th we had another meeting at the Faculty of Philosophy with 40 very enthusiastic participants. This meeting was the first activity of the Marxist Debating Circle at the University of Malaga, which is being organised by members of Lucha de Clases at this university. A dozen students left their details and expressed interested in participating in the activity of the Circle, in addition to a dozen or so students who had already signed up to participate in the days before. 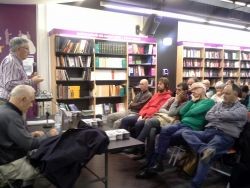 In Vitoria, there were three events, which the comrades of Lucha de Clases prepared with great enthusiasm and dedication. The campaign started with three weeks of propaganda work previous to the meeting, especially in the university, with stands selling literature and advertising the meeting, fly-posting and leafleting all the faculties. 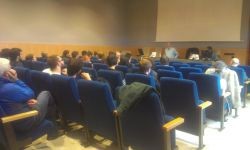 The first meeting took place on Thursday 13 November, in the Lecture Hall of the University of the Basque Country in Vitoria. The attendance was very good, with more than 40 people, with a mood of extreme interest and a high level of participation in the discussion. About 20 people left their details, expressing interested in further discussion and future events.

That afternoon the second meeting took place at the Civic Centre El Campillo. The capacity was 40 seats which were all filled, and some had to stand in the two-hour presentation and debate. They were primarily industrial workers, but several students and university professors also attended. Among the workers there were trade union shop stewards from the metal industry, from factories such as Talgo, Aratubo Ferroser, Acerinox; and also chemical workers from Michelin; street cleaners, public sector and healthcare workers. 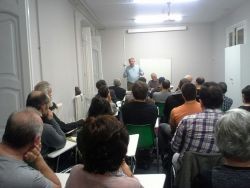 A dozen people also left their personal details for further discussions and participation in future activities. Finally, on Friday evening November 14, we held a meeting at the Elkar Bookshop. About 30 people participated in this very exciting event, including some students and workers from San Sebastian, Estella (Navarra) and some who had come by car from as far away as Cantabria.

Lessons of the Spanish Revolution

In all these meetings Alan explained how the fall of the monarchy of Alfonso XIII, in April 1931, opened the floodgates of the revolution in Spain. Contrary to what the reformists argued then and are still arguing now, the choice before Spanish society of that time was not between democracy and fascism, but between a socialist republic and fascism.

The acute economic and social crisis affecting Spanish capitalism made it impossible for the ruling class to maintain the democratic rights won by the workers and peasants with the Republic. It needed to crush the working class and its organizations because the development and modernization of Spanish society they longed for was incompatible with the rule of a corrupt oligarchy based on a ferocious exploitation of workers and the parasitic lifestyle of the landed gentry who had the support of the caste of army officers and the Catholic hierarchy.

When the forces of reaction realized they could not hold back the momentum of the masses by “democratic” means they organized a coup d’état in July 1936.

During the years of the Republic and the Civil War a social revolution was taking place, with the takeover of the factories and land by the workers and peasants. But the leadership of the workers’ organizations (PSOE, PCE, CNT, POUM) were not able to provide leadership and fight to the end, frustrating the revolutionary aspirations of the working masses. This ultimately led to a terrible defeat and a brutal 40-year dictatorship.

However, as Alan explained, despite everything, the working class always rises again. Years and decades were needed to heal the wounds of the past, but the Spanish working class rose again, fighting heroically, beginning in the early 1960s against the Franco dictatorship. Alan quoted statistics from the period showing the powerful strike movement – in underground conditions and dictatorship – that shook the foundations of the regime and forced their representatives, on the death of the dictator, to negotiate with the leaders of the labour movement: the PCE, PSOE, CCOO and UGT.

But just as in the 1930s, these leaders preferred to reach an agreement with the old regime and betray the revolutionary expectations for real and profound change that the workers and the youth sought to achieve through their mass struggles. It is therefore false to talk about the alleged inevitability of the 1978 regime, as the leaders of the Left invariably do, attempting to conceal the responsibility for their betrayals by pleading a supposedly “unfavourable balance of forces”. For the reformists the balance of forces is always “unfavourable”!

The so-called Democratic Transition was, to quote in Alan’s words, “the fraud of the century”. After forty years of fascist barbarity, not a single torturer or murderer was ever tried and convicted. Nothing was done about the tens of thousands of victims of the dictatorship who lay buried along roadsides and cemetery walls. The old state apparatus remained intact with the old police chiefs, military commanders and reactionary judges at its head. The hideous privileges of the Church remained and, above all, the monarchy, whose representative, Juan Carlos I, was appointed by the dictator Franco as his successor as head of state, was retained. Naturally, the oligarchy of 200 families that controlled the economy, the same that stood behind the fascist coup of 1936 and supported Franco’s dictatorship, still rule Spain to this day.

In his lead-offs, Alan Woods linked the experience of the Spanish Revolution with the disappointment of people’s high expectations after the so-called Democratic Transition was put in place and also connected it the current crisis of the regime that was established in 1978 and the emergence of PODEMOS. This latest development is an attempt to give a political expression to the deep discontent and desire for change demanded by millions who are suffering a drastic deterioration of their living and working conditions.

The wheel of history has turned full circle. The old, rotten regime of 1978 is in a deep crisis and the old parties and institutions on which it rests are completely discredited. Spain has been hit hard by the crisis of world capitalism. All the attempts to prop up an outworn and degenerate system based on a parasitic oligarchy that controls the economy, are leading to a massive revolt involving millions. The need for society to take over the wealth and resources generated by millions of workers for the common good is greater than ever.

What is needed, as Alan explained, is that PODEMOS should adopt a clear and concrete programme of social transformation, and organized in the most efficient and appropriate manner to ensure maximum participation of its members in the development of the political line and in decision-making. Hence he insisted that Marxists cannot simply comment from the sidelines but must get involved in PODEMOS, as well as in the social movements, to contribute to the debates and propose the necessary policy and programmatic clarification, patiently explaining the need for a socialist alternative to overcome the barbarism of the capitalist system, not only in Spain but internationally.

These are the same objectives of the International Marxist Tendency, to which Lucha de Clases belongs. Alan ended his speeches calling on those present to join the IMT to promote the task of fighting in an organized manner for Socialism worldwide. 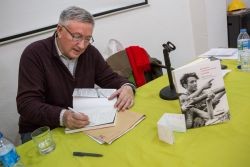 To sum up, we are delighted with the result of these meetings, in which we sold a hundred copies of Felix Morrow’s book. As a result of the publicity of our events, several bookshops in different parts of Spain have contacted us to express their interest in distributing and selling the book. We were particularly pleased with the dozens of participants interested in keeping in touch with Lucha de Clases.

We would like to emphasize that all those who have had a copy of this book have praised its high quality of design and production, which fills us with pride and satisfaction. The campaign around the book continues, although without the presence of Alan Woods. Already this month, and continuing into December, we have events planned in Castellon, Granada and Palma de Mallorca, which we will advertise in the coming days and weeks.

We would like to thank Alan Woods for his tour in our country and we hope he will join us in new activities next year.