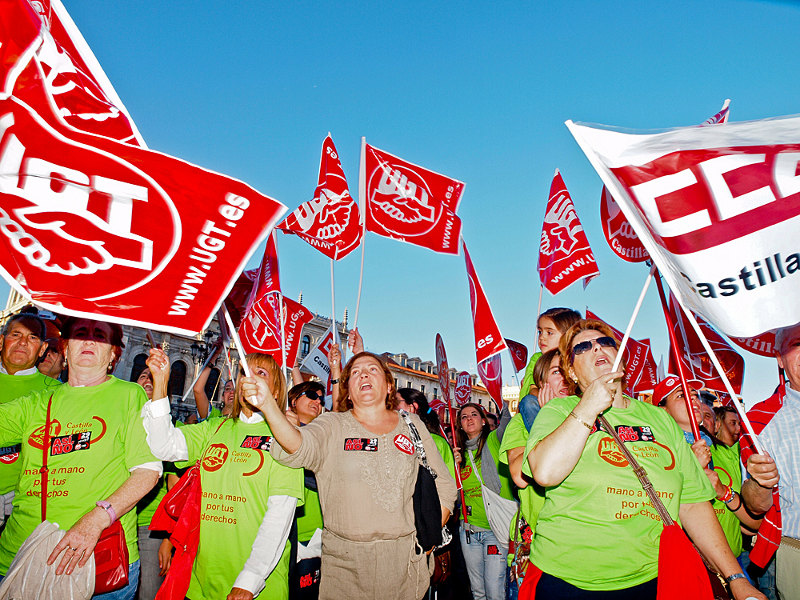 The Spanish trade union leaders have finally set a date for a 24-hour general strike against the government’s labour counter-reform for March 29. On Sunday, March 11, 1.5 million people marched again in around 60 cities across the country in militant trade union demonstrations. The government and the right-wing media have reacted hysterically denouncing the strike as “anti-patriotic.”

The immediate reason for the strike is the counter-reform of the labour law passed by the right-wing Popular Party government. The main plank of the “reform” is to make it cheaper for employers to sack workers but it also represents an attack on working conditions, collective bargaining and employment rights, etc.

As we explained before, this reform “takes a number of very serious steps towards giving the bosses the right to hire and fire at will, by reducing compensation pay, lengthening the trial period in which workers’ have no employment rights, eliminating the need for government authorisation and trade union approval for temporary layoffs, etc. The “reform” also allows any company having had three quarters of decreased profits and actual or projected losses to lawfully sack workers, which in effect means that almost all companies in Spain have now the possibility to sack workers lawfully “for economic reasons” with a drastically reduced level of compensation pay. The measures passed by decree on February 11 also seriously undermine collective bargaining agreements at a national level along the same lines as similar reforms proposed or implemented in Greece and Portugal. The decree makes it easier for employers to unilaterally change hours of work, conditions, location of the workers, wage structure, etc. The reform also eliminates additional protection which public sector workers had against sackings.”

In fact, it is the most serious assault on trade union and employment rights since the fall of the Franco dictatorship. This is what the capitalist class is demanding as a way of getting out of the crisis, which in Spain is particularly acute. The trade union leaders were taken completely by surprise. They had made repeated calls for the government to negotiate and resisted the enormous pressure from below for the calling of a 24-hour general strike. None of the concessions they had made regarding wage restraint softened the Rajoy government. Finally, the trade union leaders had no other alternative than to call the general strike. The massive demonstrations on February 29th (see PICS and VIDEOS) revealed the willingness of the workers to fight and removed any excuse the trade union leaders of CCOO and UGT may have had.

Madrid, March 11 demonstrationThe demonstrations on March 11 were of a similar size. In some places they may have been smaller, the inevitable result of people thinking that one more demonstration will not make a difference, but in other cities (Granada, Gijón, etc) the marches were bigger, with new sections joining in and wanting to register their support for the forthcoming general strike.

In Madrid the trade unions gave the figure of half a million people in the demonstration. The truth is that the head of the march had not left the starting point and already the whole route was packed full with demonstrators (as had happened on February 29). A similar figure was given for the demonstration in Barcelona, while tens of thousands marched in provincial capitals throughout Spain.

The mood is completely different to the one which preceded the September 29 (29S) general strike in 2010. At that time many workers, though shocked by the depth of the recession, still thought that it was going to be short-lived. The attacks that had been implemented at that time were still mild compared to what is now being proposed. The 29S general strike in 2010 was powerful, although it did not completely paralyse the country. Most importantly, the trade union leaders at that time drew the conclusion that they were not strong enough to stop the attacks (then it was mainly the counter-reform of the pensions). The lack of success of the French wave of strikes of that autumn reinforced that idea in the head of the leaders of CCOO and UGT. In January 2011 they signed an agreement with the then Socialist Party government which basically accepted all the government proposals.

This was one of the reasons for the explosion of the movement of the indignados in May 2011. There was a growing anger against the fact that it was ordinary working people who were being asked to pay for the crisis of capitalism, while at the same time the trade union leaders did not offer a channel for this anger to express itself. Worse than that, they accepted the attacks and signed up to them on the basis of the “lesser evil” argument.

Millions came out on the streets in May, June and then October last year in hundreds of cities and towns all over the country. This then translated into massive mobilizations against cuts in education in Madrid in the autumn, the movement against cuts and repression in Valencia earlier this year, the constant mobilizations and wild cat strikes against cuts in education and healthcare in Catalonia, etc. A nationwide movement developed against home repossessions in cases of mortgage defaults.

This developing mood is what finally filtered through the structures of the largest trade unions, CCOO and UGT, and in the end left their leaders with no other choice but to call a general strike on March 29.

In spite of all this, the trade union leaders are desperately clinging to the past. They are making appeals for the government to negotiate, rather than actually withdraw the labour “reform”. They argue that this is a breakdown of the “social contract” established after the fall of the dictatorship, one which should be renewed. This shows a complete lack of understanding of the reason for these attacks. It is not that the ruling class and its political representatives in the PP government suddenly have woken up and decided to wield the axe because they are nasty people. There are, of course, plenty of callous individuals amongst them, but the real reason is the deep crisis of Spanish capitalism. From the point of view of the ruling class they need to recover profitability by increasing the competitiveness of Spanish products abroad. One way to do it is by cheapening labour costs through a massive assault on wages and conditions.

This is not an isolated attack. It is just one part of a whole battery of cuts and attacks on acquired rights which the ruling class needs to implement.

The Popular Party government of Rajoy has attempted to delay as much as possible the discussion of the 2012 budget so as not to affect negatively their election prospects in the regional elections in Andalucia and Asturias on March 25. In both regions opinion polls show a clear fall of the vote for the PP in comparison with the November 20, 2011 national elections and a significant increase of United Left , in Andalucia from 7% to 9,8% and in Asturias from 10.3% to 15.5%.

It is clear to all that the recession in 2012 is going to be much worse than originally anticipated, which in turn means that a larger amount of austerity cuts will be required in order to reduce the deficit.

Using the excuse that the previous government of the Socialist Party left them with a bigger deficit than anticipated (8.5% of GDP instead of 6%) Rajoy thought he could defy the European Commission and not abide by the agreed budget deficit target for 2012 (4.4% of GDP). However, the European Union could not be seen as being lenient towards Spain. That would have provoked a domino effect with other European countries also facing deeper recessions and higher deficits asking for the same treatment.

In the end, despite Rajoy’s bravado, the European Commission agreed to a higher deficit figure for this year (5.3% instead of the 5.8% which he had boasted about). However, Rajoy was forced to stick to the 3% target for 2013. In reality, all this means is that any austerity cuts not introduced this year will have to be introduced next year. The PP government still has to find an additional 5 billion euro worth of cuts on top of the 30 billion euros already planned in the budget figures which have not yet been made public.

This will mean further cuts in education and healthcare, in the wage of public sector workers, further privatizations, higher taxes, less employment in the public sector, etc. As has been shown clearly in Greece, the only effect of these measures will be to cut consumption, deepening the recession and making it even more difficult for the government to meet its targets.

This is another difference with the general strike in 2010. The Spanish people have already watched what has happened in Greece. They are fully aware that these measures will not solve anything, but rather will prepare a new round of austerity measures and attacks. This has fuelled the determination to fight back.

Many workers have also drawn the lessons that the agreements signed by the trade union leaders in January 2011 and February 2012 did not work. They will go on strike and will work hard to make it a success, but many trade union activists have a healthy attitude of mistrust towards the leaders of CCOO and UGT. At the same time there is a very strong feeling of unity, based on the correct understanding that only the widest and most massive mobilization has any chance of rolling back these attacks. The nationalist trade unions had already called for a general strike in the Basque Country and Galicia on March 29, thus this time there will be no division of the workers along national lines.

The ruling class is fully aware that what is being prepared is a scenario of sharpening class struggle and they are acting accordingly. They saw in Valencia how the repression against school students fighting education cuts only served to provoke an even larger movement. They are following a clear strategy of criminalizing the protests linking them with images of chaos and violence. The right-wing ABC had a full page headline declaring “A political strike against the general interest”, while the even more right-wing La Razon lead with “29M general strike against Spain”. The ruling PP has led the chorus arguing that the general strike is not “patriotic” and that the actions of strike pickets “will not be allowed”, despite the fact that they are a constitutional right.

If we draw the lessons from the experience of the last three years of struggle of the Greek working class, we can see that a one day general strike will not be enough to defeat any of these attacks. It will be very significant from the point of view of the working class starting to flex its muscles, to become aware of its own power. But this is not a context in which one general strike can force the government to make concessions. On the contrary, this is just one of a series of attacks which will be unleashed in the next few months.

To defeat them requires a plan of sustained and increasing mobilization, including a 48 and a 72-hour general strike and militant strikes and occupations in all those specific sectors under attack. But it also requires building a clear alternative on the political front. United Left saw a significant increase in its votes in the parliamentary elections in November. It needs to build on that by adopting a clear programme of anti-capitalist measures which must start from the recognition that this is a crisis of the capitalist system, and therefore it cannot be solved by trying to regulate it or reform it.