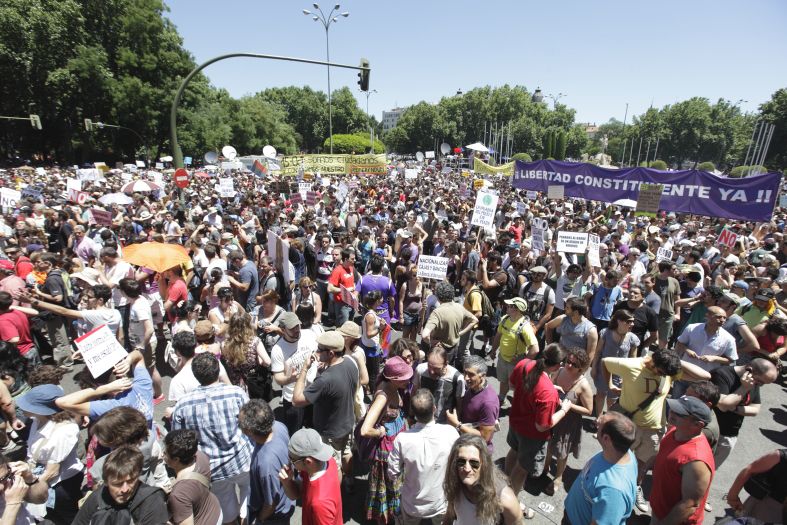 Surpassing all expectations, hundreds of thousands of people once again took to the streets of cities and towns across Spain on June 19 in the largest demonstrations so far of the movement which started on May 15. What started as an expression of general anger against politicians and bankers, and the attempt to make ordinary working people pay for the economic crisis, has become a mass movement which is becoming more overtly political and orienting to the working class.

The immediate reason for the demonstrations on J19 was to oppose the Euro pact, but the marches became a massive cry against the austerity measures imposed by the Zapatero government and the different right-wing regional governments.

In Madrid the organisers estimated attendance at 160,000, who marched in six different columns from the different Madrid neighbourhoods and some from the outlying working class towns which surround the Spanish capital. Thus, two thousand marched 15 km from Leganés, leaving at 9am. Small groups from the neighbourhoods started to converge together like tributaries into a main river flowing towards the Spanish Congress of Deputies. Tens of thousands more went straight to the Congress where they were met by a massive police presence preventing anyone from getting anywhere near it. The mood was one of exhilaration and joy, but at the same time it expressed an anger that had been accumulating for a long time and could not find any expression until this movement erupted. (see Youtube: Marcha desde el Norte de Madrid para el 19j and Youtube: Vista aérea manifestación Congreso #19j ) A full Spanish chronicle of the demonstration with videos and pictures has been published on #acampadalsol.

Expressing the growing maturity and political clarity of the movement, the march ended with the organisers reading out a statement in favour of a general strike which was received with shouts of "Viva la lucha de la clase obrera" ("long live the struggle of the working class").

Barcelona. Photo: Erol Yesilyurt In Barcelona, the organisers estimated attendance at 250,000 that marched behind a banner with a clear slogan: "The streets are ours – we will not pay for their crisis". ( see Youtube: Multitudinaria marcha de los "indignados" en Barcelona and photograph on kaosenlared.net)

On Wednesday June 15, the movement in Barcelona had attempted to blockade the Catalan parliament to prevent it from passing an "Omnibus Law" giving full powers to the right-wing nationalist government to implement massive austerity cuts. Thousands had gathered from the previous evening and formed human barriers in an attempt to prevent members of the Catalan parliament from entering. Despite the clear peaceful nature of this movement, the media and all political parties used the fact that small numbers acted in a violent way to attempt to portray the whole movement as the work of an extremist fringe. The right wing Catalan paper La Vanguardia, compared the actions of the demonstrators to the February 1981 attempted military coup! Parliament passed a unanimous declaration in defence of "democracy" and rejecting the "violence" of an "unrepresentative minority".

Barcelona. Photo: Erol Yesilyurt However, as the day went by, video footage emerged of a number of plainclothes police officers who had infiltrated the protest and whom the protestors accused of having started the violent incidents which the police used as an excuse to unleash brutal repression. (See Youtube: quienes son los violentos ? Subt castellano de xartigas ). Having been identified, the police infiltrators were finally escorted out of the demonstration under the protection of their uniformed colleagues. This is a common trick used by the police everywhere, but they are not usually caught in the act in such an obvious way as this.

This was the second attempt of the CiU right-wing nationalist Catalan government to attack the movement and crush it with repressive methods. The first time was when they attempted to remove the tent camp in the central Catalunya Square ahead of the celebration of FC Barcelona’s win in the Champions League. They had calculated that it would be easy to remove the hundreds that were left in the tent camp after a couple of weeks, but they failed utterly, because thousands more came out in their defence, surrounding the police and forcing them to leave in humiliation. The brutal police repression against the peaceful movement, broadcast live on TV, had the effect of galvanising public opinion in favour of the demonstrators.

The police provocations on June 15 and the unanimous campaign of the politicians and the media against the movement's alleged "violence" were aimed clearly at cutting the movement off from the sympathy of public opinion (an opinion poll in early June showed 81% of the population felt sympathetic to the movement). Once again, they failed. People could see that the reaction of the media and all political parties, comparing the movement to supporters of terrorism, was completely out of proportion, even to the actual violence that had taken place on the part of a minority (spitting on politicians, throwing paint at them and verbally abusing them).

Madrid After all, these were members of parliament who were going in to vote massive cuts in education, healthcare, the number of public sector workers, etc. As some in the movement commented: this is the real violence. The position of the leadership of the opposition Catalan Socialist Party was, if possible, even worse than that of the ruling CiU, criticising the police for having been too lenient with the demonstrators. The deputies of the soft left ICV went as far as congratulating the police for having made possible the holding of the Catalan parliamentary session! This is the parliamentary session which passed massive austerity cuts in a joint vote of CiU and the right-wing Popular Party. It is not a surprise that for many of the people in the movement all parties are regarded as being the same! One of the most popular slogans of the movement says it clearly "they do not represent us" (que no nos representan). The left parties should have actually joined those outside parliament and mobilised all their forces, so that there would have been not thousands but hundreds of thousands. To its credit, the smaller Catalan Communist Party (PSUC) came out in favour of the protestors and against the criminalisation of the movement.

The demonstration in Barcelona yesterday also set off from the different neighbourhoods and working class towns surrounding the Catalan capital, some leaving as early as 3pm and then converging on the Via Layetana avenue which was full of people until at least 20.30. As in Madrid, there were slogans in favour of a general strike and when the demonstration passed the headquarters of the unions they were treated to a mix of slogans and booing. Let us remember that after the September 29 general strike last year, the two main unions, CCOO and UGT, ended up signing the pensions counter-reform with the Zapatero Socialist Party government. 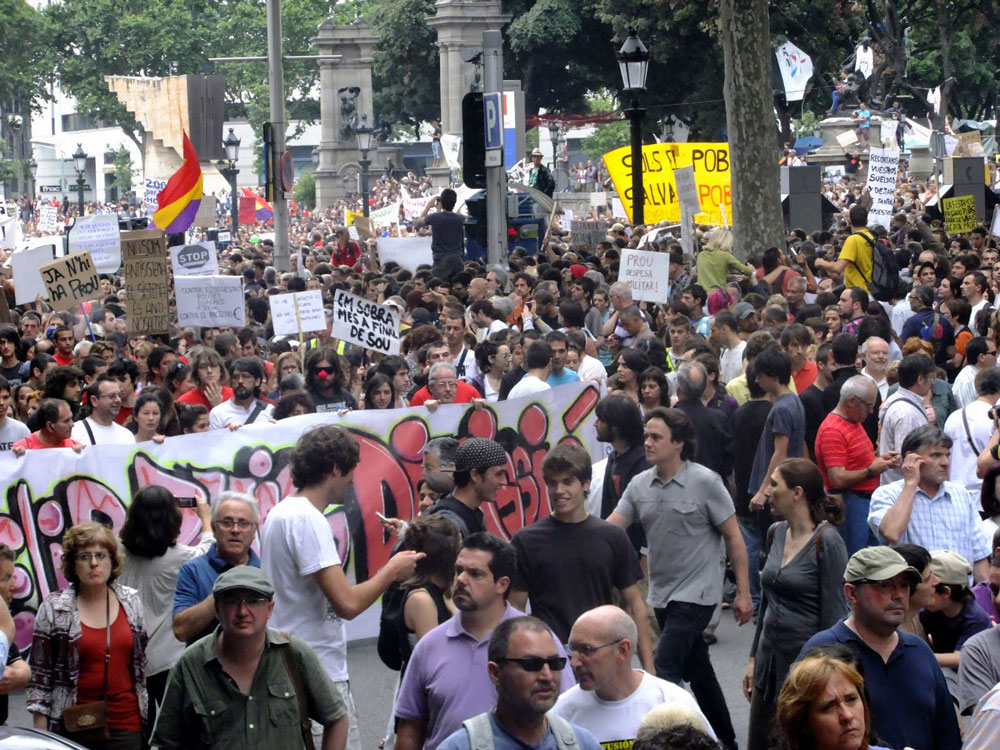 Barcelona. Photo: Erol Yesilyurt It is clear that the massive protests in Greece and the whole discussion of the Greek bail out are in the minds of millions of people in Spain. "The markets have reacted very nervously," as the bourgeois media would put it, to the perspective of default in Greece and this has had an impact in Spain where there are even talks of the government being forced to call early elections in the autumn if the economic crisis worsens.

In the last few weeks the demands of the bosses and the Socialist Party government for a counter-reform of the labour law which is aimed at destroying collective bargaining agreements, has proved to be too much even for the trade union leaders of the CCOO and UGT. They have walked out of the negotiations and are now calling for a day of action on June 22. The trade union leaders are massively discredited in the eyes of their own members and the workers in general. This movement has taken them by surprise and shaken them.

One of the most striking features of the situation that has developed in Spain is the huge vacuum on the left. The programme being espoused by all left-wing parties and the leadership of the trade unions is very far from the radical socialist programme that is required by the objective situation. This explains both why this movement has emerged largely in a spontaneous manner and also the many confused ideas that have been prevalent within it.

However, the needs of the objective situation, determined by the deep crisis of Spanish capitalism, have a way of asserting themselves and pushing the masses to the left. The attempts by a small minority of hardened “apolitical” or anti-political elements (some of them right-wingers disguised as apolitical) in the movement to limit it to an innocuous appeal for electoral reform and against corruption in politics might carry the day when there are a few hundred in a tent camp or an assembly, but when hundreds of thousands come out on the streets the situation changes, the demands become more clearly anti-capitalist and the methods of struggle of the working class (in this case the call for a general strike) reassert themselves.

The actions of the movement in the last week have also moved on, focussing more on physically preventing evictions and repossessions, thus bringing the social and economic demands to the fore. In the process of these struggles, it will become ever clearer that it is not this or that reform that is required. The masses from their own living experience are in the process of discovering that it is the whole rotten system that is at fault. What to workers and youth on the streets appear as reasonable demands, are incompatible with the capitalist system. That means that this struggle is on a trajectory that can only eventually take it to drawing very radical and revolutionary conclusions. And what we are seeing in Spain, following on from the events unfolding in Greece, is the beginning of an all-European revolution.