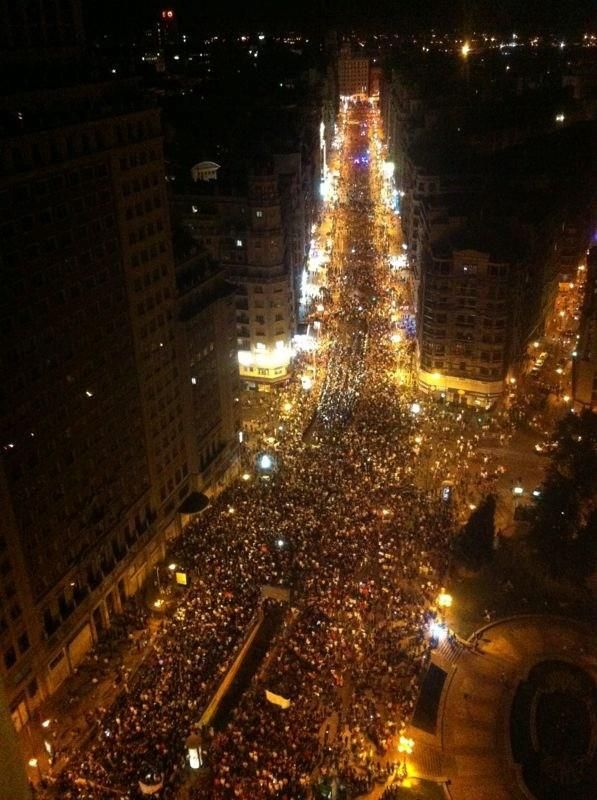 Last night over 150,000 people turned out in Madrid to receive the coal miners who have marched for 18 days to cover the 400 km separating their home regions from the Spanish capital. A huge crowd of tens of thousands (the Madrid secretary of CCOO union put the figure at half a million) showed their solidarity with raised fists, revolutionary slogans and songs, and accompanied them from Ciudad Universitaria all the way to the Puerta del Sol square which the indignados  have filled often in the last one year of struggles.

The rally was supposed to start at 10 pm but it was nearly 2 am when the miners finally entered Sol. Madrid fire-fighters, also in struggle against cuts and job losses, provided the stewarding and opened the way through the crowds for the miners who had reached the outskirts of Madrid the night before. The column from Aragón finally met the one from Leon and Asturias.

Tens of thousands sang the Internationale and the miners’ anthem Santa Barbara, as many miners were in tears, overwhelmed by the extraordinary display of working class solidarity (see VIDEO of the Gran Via here).

There was a mood of anger but also of exhilaration. The crowd became aware of its own power and started shouting “Si se puede” – “Yes we can” and “Long live working class struggle”. Over 8,000 coal miners have been on strike since the end of May fighting against the government decision to cut agreed subsidies to the industry by 63%. Their jobs and the future of another 30,000 jobs are at stake. They have been first ignored by the media, then slandered and vilified, described as violent extremists, terrorists even. The government and the mass media have worked hand in hand to paint a picture of well paid miners who retire early with good conditions. None of this is true but it certainly had a certain effect in slowly undermining morale. Last night the trend was reversed. The miners felt directly the enormous wave of working class solidarity their struggle has aroused, “the people are with us” many said.

Ten days ago Spain won the Euro Cup and the ruling class attempted to use the understandable joy of ordinary people to create a mood of flag-waving national unity. Yesterday night tens of thousands shouted “this is my national team” (“esta es mi selección”), amongst a sea of Aragon, Asturian, Leon and red flags (see UGT VIDEO here).

There is a good reason why the struggle of the miners has become a point of reference for millions of Spanish workers and youth. They are seen as being prepared to struggle until the end, whatever it takes. This is precisely what is needed as opposed to the “strategy” of the trade union leaders of CCOO and UGT, who called a very successful general strike in March, but have not followed that up in any serious way. Workers and youth are prepared to struggle. Every Friday the government announces new austerity measures, more cuts, further attacks; the banks are bailed out while they evict working class families from their homes; workers are asked to make sacrifices while corrupt top judges get away with resigning their positions. The mood of anger has been building up for more than a year. But it does not have any expression. 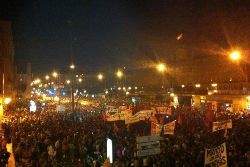 Even in relation to the struggle of the miners, the trade union leaders have not properly organised solidarity. What is required is a nationwide campaign of mass meetings in all workplaces, mass rallies with speakers from the miners, workplace collections for the miners’ strike fund – this would be the only effective way to counter the propaganda of the ruling class but also it would serve to prepare the working class as a whole for further action. “Sí se puede” (“yes we can”) means that workers and youth are prepared to struggle, but only if they are offered the perspective of a sustained and serious campaign of mobilisation to defeat this government and its austerity measures.

As we write these lines, another huge demonstration accompanies the miners to the Ministry of Industry, while in Parliament president Rajoy is explaining the “new” conditions which have been negotiated with Europe for the bail out of the banks and the budget reduction deficit. In summary, in exchange for a delay of one year in reaching the 3% deficit to GDP target, another package of cuts, worth 65 billion euro, will be introduced. Railways, airports and harbours will be privatised. VAT rates will be increased. Unemployment benefits will be slashed. The lengthening of the retirement age will be brought forward. Civil servants will lose their Christmas bonus until 2015. Workers are once again being asked to pay for the crisis of capitalism.

Significantly, Rajoy has opened his speech by thanking the Socialist Party for having formed a united front in Europe. On the other hand, United Left members of parliament are wearing miners’ solidarity T-shirts. Not surprisingly opinion polls published at the weekend show a further decline of the ruling right wing Popular Party (from 44% in the November 2011 elections to 37% now), but also a continued declined of the discredited Socialist Party (from 28.7% to 23.1%) which is seen as having started the current wave of austerity cuts when in government and agreeing with the PP on the fundamental issues now. The main beneficiary is the left wing coalition United Left, increasing from 6.9% which it got in November to 13.2% now. 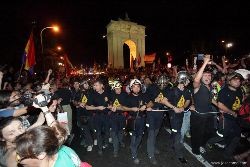 Madrid firefighters at the forefront of the demonstration. Photo: José Camó - www.josecamo.comWhat is next? From an economic point of view, the cost of making concessions to the miners in order to de-activate their struggle is not that big. Cuts in subsidies to coal mining represent “just” 200 million euro. However, making concessions now would send a very dangerous message to the rest of the workers and youth suffering similar attacks: “the only way to win is through an all out strike, barricades and marching on Madrid.”

On the other hand, so far, the trade union leaders have not worked out any clear strategy to spread this struggle to the rest of the working class, the only way now in which pressure can be stepped up. Even though on June 18 there was a general strike in the mining counties, since then no further action has been taken. At the very least there should be a general strike in Asturias and a national day of action in solidarity with the miners.

At the same time the miners are now enthusiastic and confident. They will not easily be defeated or convinced to go back to their jobs empty handed, particularly since they know that if they do not win this battle their jobs are likely to disappear before the end of the year.

When these two forces clash, the likely result is an almighty explosion and either the trade union leaders put themselves at the head of it and give it a semblance of direction or they risk being brushed to one side by a spontaneous movement from below.

Further background to the miners' struggle:

And here's a good Associated Press VIDEO summary of the struggle