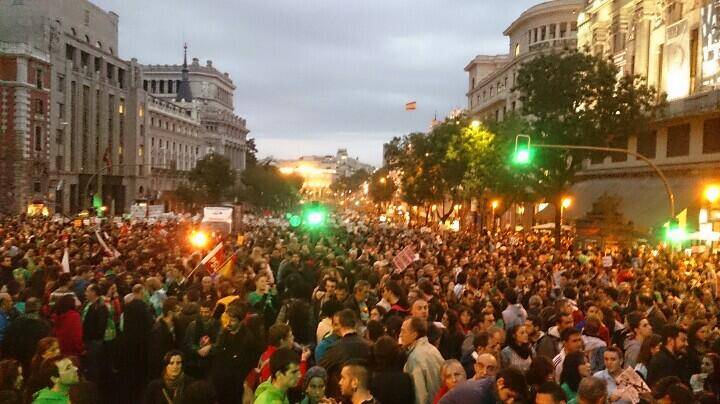 Hundreds of thousands of students, teachers and parents marched yesterday, October 24, in over 70 cities and towns in Spain against cuts and counter-reforms and in defence of high quality and free state education as part of a one day strike of the whole education system.

The strike had been called jointly by teachers’ unions, the green tide movement (Marea Verde) against education cuts, student organisations and parents’ associations. The movement was a protest against a sustained assault of the right-wing PP party on state education, and particularly the misnamed Law to Improve the Quality of Education (LOMCE), the brainchild of the hated education minister Wert.

The LOMCE, which was approved by the government in May this year, amongst massive protests of students, teachers and parents, is now being discussed in Parliament. Having been passed in Congress, it is likely that the Senate will also approve, as both chambers are dominated by the ruling Popular Party.

Opposition to the law come from many different angles. Amongst other things the law aims to create an education system which is:

Furthermore the law provides an ex post facto justification for the brutal cuts in the education budget introduced over the last few years (totalling 6.4 billion euro), with the sacking of about 70,000 teachers, increased ratios of pupils to teachers, cuts in the school budgets, etc. Student and teacher organisations have characterised it as an attempt to go back to the education system of the Franco regime. 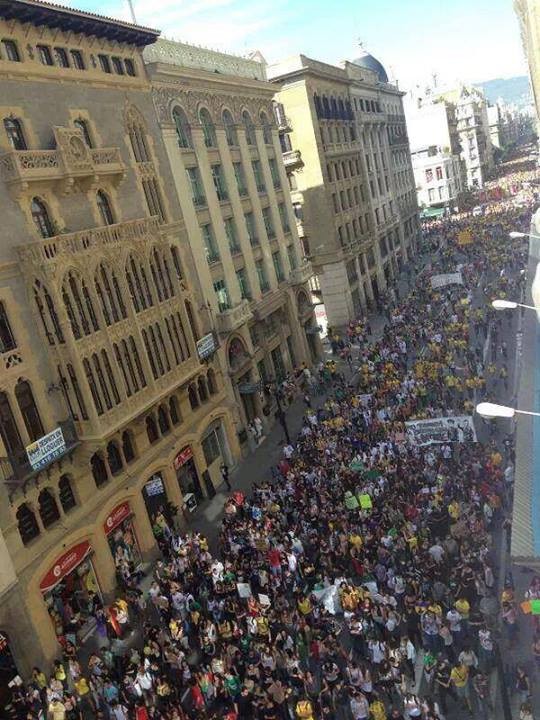 The strike on October 24, which affected all levels of the education system from primary to university, was preceded by two days of strike action called by the Students’ Union (SE) on October 22 and 23, with large demonstrations with tens of thousands of students in the main cities.

As usual there was a war of conflicting figures as to the level of support for the strike on the 24th, with the Education Ministry provocatively dismissing its impact, while the teachers and student unions reported varying levels of participation of between 50% to 80% or even 100% in different regions, educational levels and depending on whether it was teachers or students which were being counted.

It is clear that amongst a section of teachers, whose wages have already been cut, there was a feeling that a one day strike (after two other strike days in the last year) would not achieve anything, particularly in the face of a government which is committed to steamrolling this and other counter-reforms.

However the level of opposition to the LOMCE and education cuts in general cannot be fully gauged just by looking at the strike figures, as impressive as they were. The huge demonstrations which took place everywhere, some at noon, others in the evening, reflect a deep seated anger not only against education cuts, but in general against the austerity policies of the government.

In Barcelona, during the day, there were 170,000 people on the streets. Here the huge demonstration was not only against the LOMCE, but also very clearly against certain aspects of the Catalan Education Law (LEC), introduced by the previous Catalan left-wing coalition government (PSC-ICV-ERC), and the education cuts introduced by the current right-wing nationalist Catalan government of CIU. There were another 8,000 in Girona, 5,000 in Tarragona and another 1,000 in Lleida. 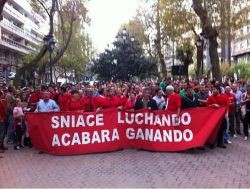 The were very big demonstrations in all the provincial capitals. 20,000 marched in Sevilla and the same figure in Malaga, with thousands more in Granada, Jerez, Cadiz, Jaen, Almeria, etc. In Valencia there were tens of thousands with another 30,000 in Alacant, and a similar figure in Catelló, as well as demonstrations at noon in many towns and cities. There were 40,000 in Oviedo and 15,000 in Santander, where workers at SNIACE chemical plant in defence of their jobs joined the education protest.

In Aragon, there were 50,000 in the capital Zaragoza in the evening demo, where tens of thousands of students had already marched in the morning (and been subject to a brutal police charge which ended with the arrest of two members of the Communist Youth), as well as thousands in towns and cities across the region. 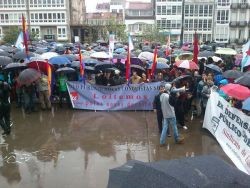 FerrolThe demonstrations in Galicia were also big, despite the rain, with tens of thousands marching in Vigo, Santiago, Coruña, etc. Significantly in Ferrol, 8,000 people braved the rain in a joint demonstration of the education sector with the local Bazan shipyard workers which downed tools and marched from the factory to the main square.

It is impossible to give a full list of all the demonstrations, but it is worth highlighting that there were thousands of students and teachers marching in Bilbo, Donosti and Gasteiz in the Basque country. Here the Basque nationalist student and teacher organisations missed an opportunity to join in the struggle against the LOMCE and the education cuts which they clearly oppose.

The biggest demonstration was to be in Madrid, where, despite the rain, 300,000 people marched, students, teachers and parents, united against education cuts.

The mood inoall of these demonstrations was angry and determined. The presence of republican and communist flags was noticeable. Clearly the movement is not merely against cuts, but against the right wing in general, against the attempt to make workers pay for the crisis of capitalism, in defence of public services in general. A common demand was for the resignation of the education minister Wert.

In a number of cities, small groups of organised fascists, under the banner of “Student Resistance” attempted to join the demonstrations, demagogically opposing cuts in education. They were quickly identified and physically expelled from the demonstrations by the crowd.

The question which is  now clearly posed for the movement is: what is next? Earlier in September, primary and secondary school teachers in the Balearic islands embarked on an all out strike against similar education cuts and counter-reforms implemented by the regional government. The strike lasted for three weeks and had mass popular support, as was shown by a demonstration of 100,000 in Palma at the peak of the movement. The strike reclaimed traditional class struggle methods which had been lost, like mass assemblies at the schools, all decisions taken by a strike committee composed of delegates from the workplace assemblies, a strike fund which raised half a million euro, etc.

Unfortunately, after the huge demonstration in Palma, the movement did not know how to take a step further. At that time what would have been required would have been a regional general strike, involving all sections of workers, as well as at least a one day education strike throughout Spain in support of the Balearic teachers. That did not happen, and no-one outside of the Balearic islands (neither teachers, nor student organisations) rose to the challenge. The strike was called off after three weeks, though the teachers and parents are still mobilised.

Since then, the idea of an indefinite strike has gathered support elsewhere. Of course this is a tool which cannot be used in a light minded way. What is true is that for many teachers and students, and for many workers in general, there is a growing realisation that one day strikes are no longer useful. There have been a few already and nothing has been achieved. The trade union leaders use these 24 hour strikes as a way of letting off steam and call them in isolation rather than as part of a sustained plan of struggle. In a number of disputes around the country, workers have already chosen to organise all out general strikes, which are not the norm in Spain, reflecting a toughening up of the class struggle. This is the case, for example at food producer Panrico. Workers at one of the plants have gone out on an indefinite strike (against the advice of the union) to fight a management plan which involves 1900 redundancies (around 40% of the total workforce) and wage cuts of over 30% for the remaining workers.

The Teachers’ Assembly of the Balearic islands has issued an appeal to the rest of the country, more or less along these lines, and insisting on the need to organise the movement along democratic lines with democratic assemblies. The very emergence of the “Green Tide” movement (Marea Verde) reflects a mood of criticism against the bureaucratic way in which the teachers’ unions work. Many of those involved in the Marea are actually members and activists of the different teaching unions, but which have found it impossible to use the structures of their own unions in a useful way.

The government will not make any concessions. The only way forward is to step up the struggle, to give the movement a clear indication that this struggle can be won and that there is a clear strategy of how to do it. After a certain hiatus in the class struggle, the education strike could be the opening of a hot autumn.