Spain
Share
Tweet
Despite the fact that the leaders of the Spanish unions are still trying to maintain social peace at all costs and despite the psychological impact of the economic crisis, the whole social environment is heating up very fast, such that a sudden entry onto the stage of the Spanish working class as a whole is being prepared.

The world capitalist crisis is having a special impact on Spain. All the figures indicate that we are in the process of entering a real slump. GDP, which in 2007 grew by 3.7%, in 2008 stood at a miserable 1.2%, achieving only 0.2% in the third quarter and falling by 1% in the fourth. The recession, in all probability, will be deep and prolonged in time and most estimates expect a drop of 3% of GDP for 2009. 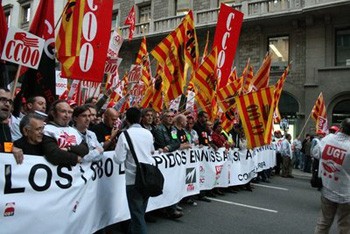 Figures for consumption are plummeting, with the number of new car registrations recording the steepest fall in history of 45% and the number of mortgages falling by 32.4% in 2008 compared to 2007.

As always, the capitalists are trying to offload the weight of the crisis onto the backs of the workers in the form of cuts and massive layoffs, using several devices. The first and most important of these is achieved by taking advantage of the high number of temporary workers in Spain (30% of the total workforce is on temporary contracts). This gives them a wide margin of manoeuvre in reducing the workforce by simply not renewing these contracts, which among other things also saves them a good deal of money in not having to pay any redundancy money.

On the other hand, especially the big companies are resorting to "expedientes de regulación de empleo" (EREs), measures that allow for temporary laying off of workers, which allow for a total or partial stoppage of productive activity over a given period of time and in many cases also include cuts in the overall workforce. In fact up to November 2008 the number of EREs had increased by 163% over the same period in 2007. There is also a growing number of selective sackings taking place, whose aim is to terrorise the rest of the workers who remain in order to more easily impose wage cuts and speed ups.

Towards a general strike

In this context and despite the fact that the current leaders of the main Spanish trade union confederations, the Comisiones Obreras, CCOO, (Workers Commissions) and the Unión General de Trabajadores, UGT, (General Workers' Union), are still tied to their strategy of maintaining social peace at all costs, trying by all means possible to constantly get agreements with the employers and the Government, and despite the psychological impact that the sudden rapid deterioration in the economy has had on the working class, the whole social environment is heating up very fast, such that a sudden entry onto the stage of the Spanish working class as a whole is being prepared.

The social discontent that has built up in the very foundations of society has not yet found a mass channel of expression, blocked by the lack of response from the workers' political and trade union organisations. But the discontent and anger is real, and it comes to the surface when it finds a large enough vehicle through which to express itself. This basic mood came to the surface in the demonstration last January in Madrid against the Israeli aggression in Gaza, where over two hundred thousand people took part. 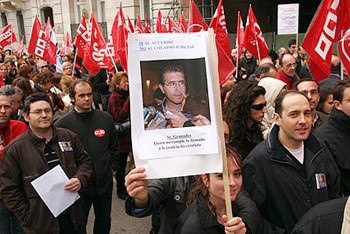 Staff in the Judiciary is mobilising against the right-wing regional government in the province of Madrid.

The workers are perfectly aware of the fact that isolated factory struggles, in the context of a deep widespread crisis, is not enough to answer the bosses' offensive. The idea that what is needed is a global response, is gaining momentum within the consciousness of millions of workers throughout the country. The call for a general strike to defend jobs and working conditions and the demand that the PSOE government adopt a policy that defends the interests of the exploited, are growing increasingly stronger among the workers.

An indication of the deep discontent that is brewing among the Spanish workers is the huge number of local struggles that are putting very strong pressure on the leadership of the CCOO and UGT. Health workers and school staff are on a war footing in many regions of Spain. We have the examples of Catalonia and Madrid, where for the next March 16 and 25 respectively, the unions have called local general strikes in non-university teaching institutions, but we also have Valencia, Galicia, etc, where demonstrations of these sections have become every day events. We also have staff in the Judiciary that is mobilising against the right-wing regional government in the province of Madrid.

Workers of the Nissan plant in Barcelona

In Catalonia, a region that is being hit particularly hard by the EREs and sackings, we are witnessing important struggles emerging in which the unions have done their utmost to keep under control. Workers in companies like Nissan, SEAT and others in the industrial belt of Barcelona have organised massive and bitter mobilisations. Also in Galicia the engineering and steel workers have come out to fight against sackings and what amounts to a creeping restructuring of industry.

These mobilisations are a foretaste of what is to come. The bosses on their part are demanding of the government a reform of the labour laws and cuts in redundancy payments. This pressure on the part of the capitalists, and the bitter situation millions of workers are facing, can be transformed into a unified and generalized response. The pressures on the union leadership in favour of a general strike will grow enormously in the coming months.