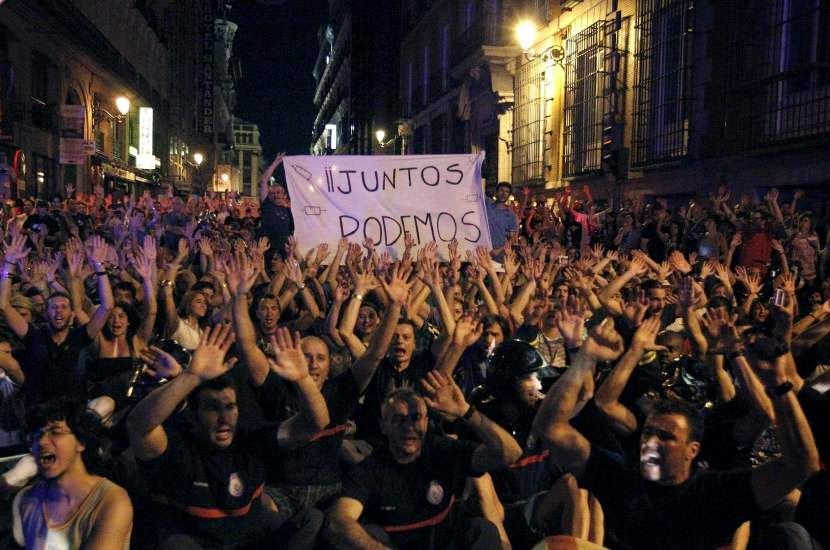 PODEMOS has become the focal point of Spanish politics. There is no party in the establishment that is not panicking about the dangers of ‘populism’. The last words of the one of the biggest bosses in Spain, the recently deceased president of Santander Bank, Emilio Botin, to a selective group of journalists days before he passed away, expressed his concern about the rise of PODEMOS.

Since PODEMOS began its subscription campaign online in July, 200,000 people have joined the organisation. To find a similar political phenomenon of enthusiasm, excitement and mass organisation in Spain, one would have to date back to 1977, right after the fall of the dictatorship.

Outrage against this system of exploitation, abuses and social injustice is turning into political action in a conscious struggle for the transformation of society. Continued social mobilisation has served to weaken the trust of millions of people in this rotten regime, and to build their consciousness and determination.

But social struggle on itself is not sufficient in order to change the status quo. The deep economic crisis lashing at the whole of the capitalist system imposes limits on Spain’s ability to repel the attacks or to guarantee old social conquests. That is why the idea that we need to take political and economic power into our own hands is spreading.

The ruling class in panic

It is inspiring to see how fear of the future on the side of ordinary people has now turned into enthusiasm and defiance; meanwhile, the arrogance and disdain on the side of the ruling class has turned into panic and anxiety. This was demonstrated by the withdrawal of reactionary reforms to the abortion law and to the local election process, which culminated with the resignation of the Justice Minister, Gallardon. Moreover, the massive campaign launched against corruption has not left the ruling class untouched, with the sudden arrest of dozens of politicians involved in fraud and tax evasion scandals.

The newspaper El Pais provided an excellent example of the panic within the ruling class in a recent editorial (“Threat to the system”, on October 28th): “Corruption demands the rapid regeneration of institutions to avoid more damage”. What damage is El Pais talking about? Is it talking about the spreading of poverty, unemployment, low wages, evictions or the dilapidation of public services? Not at all. Here is what has been bothering them:

“The systemic character of corruption gives easy and demagogic ammunition to those who advocate for a split, not from the corrupt system, but with the constitutional one, even to search for solutions contrary to democracy”.

For democracy, El Pais means a society that votes every four years, while, in the meantime, corporations and businessmen make all the real decisions. It is precisely this sort of bankrupt ‘democracy’ we are fighting against. El Pais is scared of the idea of ordinary people organising to turn this society upside down.

Now, when the first breezes of revolution are starting to blow, the Spanish bourgeoisie lacks puppets amongst the leadership of the labour movement who have the minimum of authority needed to derail the aspirations of millions of people for a radical change in society.

The leaders of PSOE, and of the trade unions UGT and CCOO, lack any authority. Recent scandals such as those of the Bankia cards, and others, have exposed how the top political and trade union leadership, who not long ago used to brag in the left and the workers’ movement, have been utterly corrupted and integrated into the system.

On the other hand, United Left (IU) faces a historical challenge. The most critical elements within it, with Alberto Garzon at the head, cannot keep dwelling all the time, and must push for an extraordinary assembly to be called with the power to elect a new leadership willing to break once and for all with all ties to the establishment. This would galvanize the activists and sympathisers who are now looking to PODEMOS for alternatives. Not doing this will only deepen the already existing scepticism towards IU.

The reality is that PODEMOS is capitalizing on the hopes of the majority of the working class and other sections of society. We must acknowledge the great job done by comrade Pablo Iglesias and by the activists in the movement, who face a tremendous responsibility.

A few weeks ago, PODEMOS put on a ‘constituent congress’, the Popular Assembly. It was an extraordinary event, with 8000 enthusiastic people: youth, seasoned militants from the 70s, workers, the unemployed, housewives, and pensioners. Resolutions were passed in favour of free public healthcare and education, against evictions and corruption, and for an audit on the debt.

There was a vibrant debate, where the majority of interventions advocated for an extension of democracy in society and within PODEMOS, against the banks and capitalism, and in favour of nationalising strategic sectors of the economy. References to the working class provoked cheerful applauses that disproved the supposedly non-ideological character which some intend to attribute to the base of PODEMOS.

Nonetheless, PODEMOS is still lacking a socialist programme, based on the expropriation of the major levers of the economy, to be put under workers’ control: the only way of carrying out the reforms proposed in the programme. PODEMOS must also acquire a consistent structure that guarantees the highest control of the leadership by its rank and file.

The way in which the pre-congress debate was organised does not seem to be the most adequate, with no presence of local, provincial and regional assemblies through elected delegates. Members were forced to read and discuss on a single national constituency, including every document and amendment from every single branch (or circles), online. This leads to a minority with available time and resources in their hands being the ones who really and fully participate in the debates and decisions made.

The voting system of the political, organisational and ethical documents also caused a great controversy, as it forced attendees to either accept or dismiss in block the documents presented simultaneously by a single team, instead of allowing each member to vote individually on each preferred document. This favoured the leading team of Pablo Iglesias, whose documents were voted in block by the majority, even more when he linked his permanence in the leadership with the electoral results of his documents.

Even so, the movement is young and we have confidence that experience will create the conditions to overcome these weaknesses, both political and organisational.

The electoral fight and social mobilisation

One of the most positive results of the Popular Assembly was promoting the convergence of GANEMOS candidates for the local elections, together with social movements, neighbourhood organizations, IU and others.

Now the leadership of PODEMOS should focus their efforts on promoting and developing social mobilisation and organisation, the real motor force behind the political change that has taken place in the country. The organisation should be involved in all social struggles and mobilisations in the streets, starting with the second round of the Dignity Marches that have been organised, with huge protests called for all the main cities across the country.

This huge social mobilisation will no doubt serve to keep the spirit of popular struggle high, and must be used as a channel to expose social injustices. The left must be at the front of the popular movement opposed to the regime (the GANEMOS platforms, social movements, trade unions, etc.) in order to win the masses to the idea of taking power and kicking out this rotten ruling class.