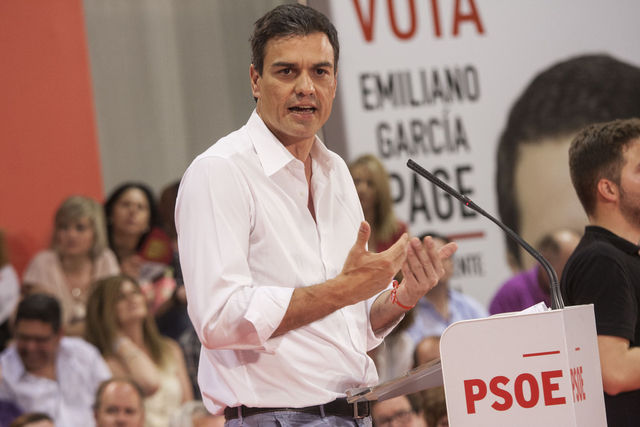 On Sunday, 187,949 members of the Spanish Socialist Party (PSOE) were called to the ballot box to choose a new leadership for the party. After a heated campaign where the more left-wing candidate, Pedro Sánchez, locked horns with the right-wing Susana Díaz, Sánchez won a resounding victory with a lead of almost 11% that has given shivers to the ruling classes.

The crisis of the PSOE

The PSOE had been left rudderless after a phase of internal turmoil last year. Bitter disagreements over the question of whether to allow the formation of a conservative PP government culminated in an internal coup d’état in October 2016, where the elected secretary general Pedro Sánchez was forcefully removed. Sánchez had refused categorically to connive in the formation of a PP government, which set him on a collision course with the right wing of the party and, more generally, with the Spanish ruling class. Sánchez’s suggestion in September that he might explore an alliance with the left-wing Unidos Podemos and the Catalan and Basque nationalists (whether honest or not) was the last straw that elicited his abrupt removal. Now this move has terribly backfired on the right-wing of the PSOE, as Sánchez is back in the leadership with a stronger hand and greater political authority.

Although in recent decades the internal life of the PSOE had become notoriously flat and ossified, the tremendous events of the past six years have shaken it up. In particular, the hung parliaments that came out of the December 2015 and June 2016 elections put the PSOE in the difficult position of having either to back the PP, which won simple majorities both times, or to turn to Unidos Podemos and other left-wing forces to try to form a left-wing government – a ghastly prospect for the ruling class and their closest agents in the PSOE leadership. Sánchez’s stance of opposition to the PP made him popular among sectors of the traditional, working-class PSOE electorate and among the rank-and-file of the party. Tensions came to a head in October when the right wing of the party used their bureaucratic leverage to stage a coup against Sánchez. There were protests in PSOE offices across the country. The whole affair made a deep impression among the party membership and its voters.

The fact that the PSOE, which for decades served as a pliant tool of the ruling class, has been shaken by these upheavals and has (at least verbally) veered left, bears witness to the profound, far-reaching radicalisation, discontent, and agitation that exist in society. All fixed, fast-frozen relations and prejudices are swept away, all new-formed ones become antiquated before they can ossify.

The crisis of the PSOE should be seen as part of the wider crisis of Social Democracy, which is incapable of pursuing its traditional class-collaborationist politics, losing votes right and (especially) left, shattered by electoral defeats, internal upheaval, and splits. Moreover, during the years of tranquillity that preceded the economic crisis, the Social Democratic leaderships became so corrupt and detached from their working-class base of support that they are now unable to communicate with it, at a loss in the current context of radicalisation and class conflict. The centre is being torn asunder, as is the case in much of Europe and the world, and the political pendulum is moving to the left, undercutting conciliatory tendencies.

Sánchez is no firebrand and is far away from Corbyn or Mélenchon. He is a child of the PSOE bureaucracy, groomed, ironically, by right-winger Susana Díaz, with no credentials as a working-class activist. However, he has come to express, in a limited and distorted form, the pressure of the class struggle and the polarisation of Spanish society within the PSOE. Sánchez wisely connected his political career to the blanket opposition to Rajoy, conscious that Unidos Podemos was chipping away the left-wing appeal of the PSOE and that any form of collaboration with the hated PP would delegitimise the party in the eyes of its traditional voters. Sánchez’s speeches were much more combative than those of other PSOE politicians and, significantly, he ended his rallies with the Internationale – including upon the proclamation of his victory on Sunday night. Sectors of the party bureaucracy (especially among its lower echelons) have also come out in support Sánchez, aware that Susana Díaz’s line of collaboration with the conservatives was a finished recipe for the demise of the PSOE – and of their own careers.

Whatever Sánchez’s inconsistencies, his election is symptomatic, and will have important consequences for the class struggle. Although Sánchez has won, it is now foreseeable that the right-wing PSOE bureaucracy that is more closely connected with the ruling class will try to put obstacles before Sánchez and wage an internal war of attrition similar to the one seen by the Labour Party. If he wants to consolidate his position, he will be forced to confront them. There will be much internal ferment in the PSOE. Its upcoming congress in June will be a turbulent affair.

The mouthpiece of the Spanish ruling class, El País, has received the news with hostility, labelling it as the socialists’ “Brexit moment” and observing that “the demagoguery – which we have seen with Podemos and with Trump – of pitting the poor against the rich has triumphed over truth, merit, and reason. We must admit that this puts our political system in a very difficult place”. Indeed, Spanish politics are up for a bumpy ride. The current PP government is very weak. It is in the minority and relies on the support of the centre party Ciudadanos and on the abstention of the PSOE to pass legislation in parliament. Moreover, an avalanche of corruption scandals has rocked the government and has further tarnished its legitimacy, generating internal conflict and an atmosphere of distrust and mutual recrimination. The complex political equations that sustain the PP government are becoming increasingly untenable.

At the same time, Unidos Podemos has rightly proposed a vote of no confidence to bring down Rajoy. This move was accompanied by a mass demonstration on Sunday in Madrid, which saw tens of thousands gather to call for a vote against the government and to protest against corruption and social injustice. Initially, this proposal was meant as a symbolic gesture to unmask the implicit alliance of the PSOE with the PP, and to undermine Susana Díaz in the socialist primaries. Now that Sánchez stands at the helm of the party, things have changed, and he will be expected to collaborate with Unidos Podemos to bring down the conservatives.

Podemos has correctly proposed that Sánchez takes the initiative and presents the vote of no confidence as soon as possible. Sánchez has taken an ambiguous position over the motion of no confidence, and has said that will not embark in such moves until the PSOE holds its congress in June. But even if he were to turn down the offer for a vote of no confidence, the question of the government and of the PP will be raised constantly, each time Rajoy needs to pass legislation. In short, things do not bode well for the government. A new government crisis is on the table again – and this time round, the PSOE will find it very difficult to turn down a hypothetical coalition with Unidos Podemos after new, prospective elections.

These constant political crises also serve to politicise and radicalise the more passive layers of the working class and force them to draw conclusions on the rottenness not only of the PP, but of the entire Spanish political and economic edifice, and will raise the alliance of Unidos Podemos and the left wing of the PSOE as the only viable, progressive way out of the constant scandals and political deadlocks. And, on the left, Unidos Podemos is emerging as the boldest and most consistent and prescient force of opposition. It has the possibility of capitalising on Sánchez’s inconsistent turn to the left by putting demands on him.

Sánchez’s victory comes after Podemos’ own congress in February, when Pablo Iglesias got a new mandate standing on a more militant, left-wing basis and defeating the conciliatory positions of Íñigo Errejón. The success of a left-wing candidacy in the PSOE further weakens Errejón’s moderate strategy, which is based on pandering to the prejudices of the petty bourgeoisie and the most conservative sectors of the working class, and on avoiding a frontal clash with the bourgeoisie. It is clear that the radicalised, fighting layers of the working class and the youth represent the only vibrant sectors of Spanish society and that the development of Unidos Podemos can only come by leaning on these layers on the basis of a bold, socialist programme. Errejón’s idea that Podemos has to transcend the left-right divide, which, he claims, is arbitrary and unhelpful, has received yet another slap in the face; the division between left-wing and right-wing politics expresses the class division between labour and capital and has the capacity to galvanise and enthuse the masses.

This is also a period of upswing in mass mobilisations after three years of relative stagnation. Significantly, strike activity has started to increase after years of decline. In comparison with last year, strike activity has risen by 11.5% in 2017. The conflict with the dockworkers, who have boldly confronted the government and threatened to paralyse the country’s ports, is far from being resolved and could add another element of instability to the situation and encourage other sectors to engage in strike action. The outcome of Podemos’ congress and of the PSOE’s primaries, as well as the new protests and strikes, reflect the beginnings of a new turn to the left in society.

Finally, the Catalan question is still latent. The Catalan government nominally stands for unilateral secession from Spain. It has, however, done little in this direction since being elected in September 2015, apart from making pompous promises. The Catalan government is led by a right-wing, bourgeois party, the PDeCAT (formerly CDC) that is not prepared to stand up to the Spanish state, and uses nationalism as a rhetorical asset to garner support, to blunt the class struggle, and to strengthen its hand vis-à-vis the Spanish ruling class. Its inaction has led to disenchantment among many pro-independence voters, and it is also leading to tensions within the nationalist camp, particularly among the nationalist left. Although Sánchez’s position over the national question is ambiguous, and he has not called for a binding referendum on independence, he has recognised the plurinational character of Spain and shown a more lenient face towards the nationalists. In the primaries he performed particularly well in Catalonia, where the regional federation of the PSOE is in favour of the right to self-determination, and where Sánchez obtained 82.7% of the vote. In this respect, Sánchez’s election is positive, since it reveals that Spanish workers are not (as some in the nationalist camp contend) inveterately opposed to the right to self-determination of Catalonia. These developments, coupled with the bankruptcy of the right-wing nationalists, reveal that the path to resolve the Catalan question and to guarantee full democratic rights for the Catalans lies not in the bourgeois nationalist camp, but in the unity of the Spanish and the Catalan proletariat, and depends on the development of the class struggle in Spain as a whole.