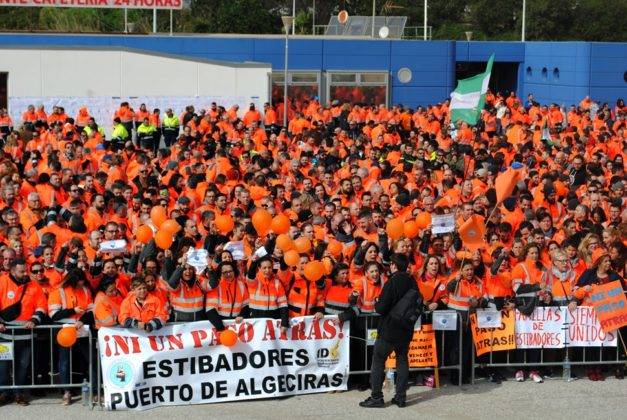 On March 6, Spanish dockers will go on strike against a decree of the PP government which destroys the very foundations of social rights conquered with organisation and struggle, and contained in agreements and laws, such as Convention 137 of the International Labour Organisation Labour, ratified by Spain in 1973, to guarantee the regularity of employment and minimum salaries of this group of workers.

The excuse used by the government is a ruling by the European Union Court of Justice of 11/12/14 forcing a change in legislation and the "liberalisation" of work in ports. This decree, according to the dockers, goes far beyond what the European Union is asking for, as the ruling does not explicitly require a downgrading of their working conditions. Essentially the decree consists of making ports available to large companies in the sector, the overwhelming majority of them multinationals, free from any social rights, collective agreements, control of the professionalism and training of workers, etc.

Union representatives of the dockers claim that the dockworkers registry, an essential element of this battle, where all trained and experienced workers in the sector are included, and that the PP government wants to eliminate, persists in 12 of the 27 countries of the European Union and therefore should be maintained. The government says, however, that the only way to enforce the ruling and regulate the legal status of cargo handling is to abolishing the special employment relationship of the dockers and the extinction of all the contracts of workers who currently employed.

The decree will have the following effects:

1. Permanent contracts become casual jobs pending recruitment by the stevedoring companies. The companies will have a three-year period in which they are obliged to hire 75%, 50% and 25% of existing workers during the first, second and third year. Therefore they can replace 25%, 50%, and 75% of the current workforce in the first, second and third year. In conclusion, it is a Regulated Dismissal Proceeding that affects 6,150 dockworkers throughout the country, a collective dismissal.

2. Workers who are not hired shall be indemnified by the port authority, that is with public funds. It is estimated that the liquidation of the current port companies -SAGEP- will have a total cost to the public purse of 350 million euros.

The negotiations of the longshoremen with the ANESCO employers organisation, with which they had reached an agreement on the new regulation of work after the EU ruling, have now broken after this ministerial gift which gives the companies the possibility of obtaining cheaper labor with less labor rights.

The president of the Bilbao Port Authority declared that "stowage, historically, has been a closed sector, leading to wage inflation." This is the crux of the matter, to cheapen the cost of labour in ports through casualisation and the destruction of collective agreements.

Who are the dockers?

This is a group of 6,150 workers of an average age of 38 years. They operate a key basic sector, the loading and unloading of goods coming in and out of Spain by ship. Total cargo handled annually is valued at 200,000 million euros, these figures represent 86% of what the country exports and 65% of what it imports.

As a result of the nature of their work they are highly organised. Union representation is held by the Coordinadora with 74%, UGT with 16%, CCOO with 8%, with smaller positions held by CGT, LAB, ELA, CIGA.

The dockers have undergone profound changes since the 1980s when their work was manual and a large workforce was required. The modernisation and mechanisation of the ports from the 1980s, the use of large cranes and container transport meant going from 12,000 to 5,000 workers. With this surplus workforce, in the early 80's a special registration office for dockers was set up in order to cover those skilled workers for whom there was no employment, which in one form or another has been maintained until the last reform of 2012, the year PSOE and PP jointly made a law on the legal regime of stowage, creating the SAGEP, the companies which employ dockers, which they now want to destroy.

What are their working conditions?

The PP government and its media spokesmen attack the dockers describing them as a privileged sector, totally alien to the reality of ordinary workers. This is false, it is a propaganda campaign aimed at spreading poison in preparing for the war that the government has declared on the dockers. It is an attempt to isolate them from the rest of society, preventing workers from other sectors to identify with their struggle and organise the solidarity needed to fight the government.

Working conditions are set in a national framework agreement which regulates various subjects such as job classification, rotation, exclusivity, registration, etc. Then in each port, wages, shifts, schedules, productivity are agreed. There is a guaranteed salary of around 1,000 € / month. Wage differentials are caused by the interest of large container ships companies to unload rapidly, so productivity bonuses are paid to workers. This can lead to higher wages, although on the basis of hard labour, in large ports and decent wages in medium and small ports. A good example is the port of Tarragona: dockers operating there are organised in four professional categories with gross base salaries ranging from 850 euros to 1,650 euros a month. To this amount, bonuses must be added, for double shift working, night shift, holidays work, in addition to performance related bonuses. In all, the average gross salary of a docker in these circumstances ranges between 60,000 and 70,000 euros / year.

The words of the Tarragona dockers reflect clearly what their "privileges" are: "Every day at 7 am stevedoring companies give Estarraco (the Tarragona stevedoring company) operational schedules and staff needed for the day, the same operation is repeated at noon. On this bases there is a draw with workers available. We never know if we are going to work or not that day. Them shifts are of 6 or 8 hours and is usual that we work double shifts, to a maximum of 12 hours of work. Normal people can program their day, we can't. Our life is work."

Indeed they joke, that divorces are common amongst dockers. The work has changed a lot in the last 20 years. "In the early days we spent the day loading and unloading sacks. Containers transformed the sector, and we have gone from manual activity to the use of the crane". With mechanisation the dockers went from groups of 20 workers operating to 10, while cranes simplified unloading from three people to one.  The representative of the Tarragona dockers states that the training of these professionals is constant. "Operating a crane is not easy and here we all have a professional license. In the past we were manual labour, whereas now we handle cranes, machines, trucks, computer systems and manage the work, one person has a great versatility, helping the company to reduce costs as one worker can do many activities."

This improvement has also meant improved safety. Stevedoring has always been a profession with a high level of workplace accidents. Trade union representatives say that one in four workers has suffered a serious accident throughout his life, and out of the four involved in the interview, all have suffered injury of one or any degree. "The four of us could be dead," said Jordi Morro. This is the "wonderful world of privileged workers" which the minister wants to obliterate, a group of workers which, like the miners, Social Security recognises drudgery and danger in their working conditions and allows them as a result early retirement.

Solidarity is key to win the fight

The policy of privatisation of public services in the European Union, which the PP government strongly supports, has set its target on Spanish ports where out of a total of 150 companies, a handful of 12 multinational groupings employing some 4,000 dockers, control most of port traffic unloading millions tons of goods from China, the Far East and other countries. But they have met with a group of very organised workers, even internationally, which are resisting casualisation and the semi-slavery that this system and the government that represents it have imposed on the working class through "labour reforms" since the onset of the crisis. But in this struggle for decent work, the dockers can not be left alone. It is the whole working class of this country which will be reflected in it and whose solidarity and understanding of the reasons for the struggle is essential to win.

The war declared by the PP on the dockworkers is a total war, even the president of the Valencian Business Confederation, the first port in container traffic in the country, has called for military intervention, as in the strike of air traffic controllers. The struggle of the dockworkers must mobilise the whole of the potential strength of the working class. What is at stake are jobs, working conditions and decent wages, compared to the massive casualisation and widespread poverty that is offered to us today as wage labor. Their determination to fight for their future is clear, their organisation and confidence in victory is complete. As the Class Struggle current (Lucha de Clases) we commit ourselves to explain and spread the struggle of the dockers to neutralise the poison and lies spread by the government and the mass media about their living and working conditions.

The trade unions and the dockers Coordinadora should make an appeal to the parties of the left and together organise a great mobilisation, starting from each port area in the country to converge in Madrid, as we saw in the miners' march, to show the potential of working class and force government and parliament to back off, because this strike is a point of reference for the class struggle in our country.