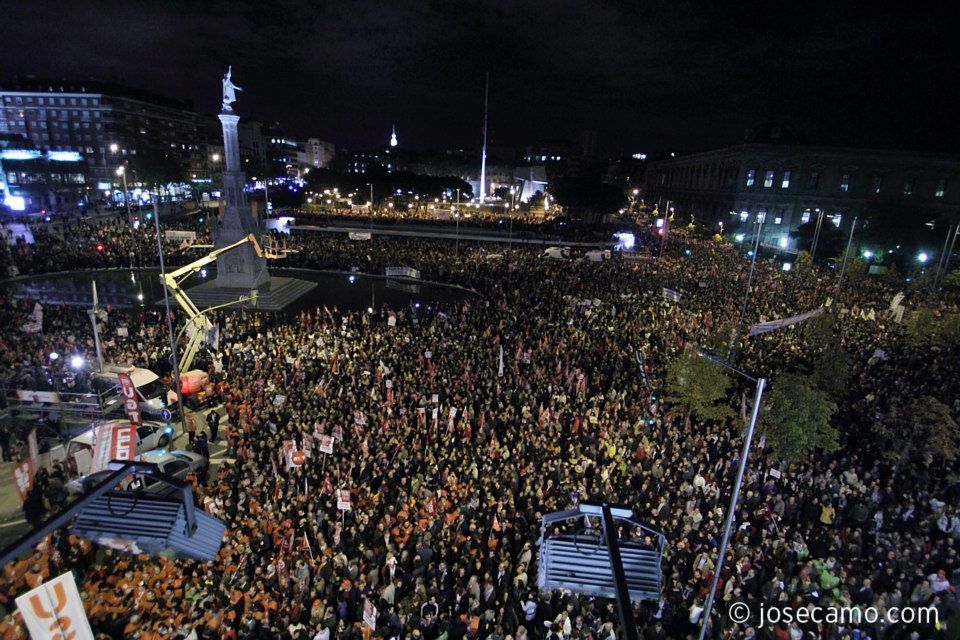 The general strike in Spain against austerity policies of the right-wing government of Mariano Rajoy (PP) had a massive turn-out and culminated in huge demonstrations in all major cities.

The strike turn-out was complete in large industry, public transport, wholesale distribution, garbage collection, education and health care, and sizeable in public administration and other sectors. Tens of thousands of workers and youth participated in pickets who walked the streets in industrial areas of big cities on the night of 13th and all day on the 14. The city centres of all major provincial capitals were taken over by activists of the working class and also significantly the youth.

In the Basque Country the strike and participation in the demonstrations was much lower because the two main nationalist unions (ELA and LAB) did not join in.

There were many instances of brutal police action in against union pickets and demonstrations. In Murcia, Malaga, Granada, Madrid and Barcelona the police charged the demonstrations and workers and youth were arrested and injured. In Tarragona a thirteen year old youth had to receive surgical care after being beaten in the head by riot police.

The 24 hour general strike of November 14 was the result of a build-up of pressure which finally forced theunion leaders to channel it. The general strike on 29 March this year, against the labour reform of the PP government, was also massive, and yet failed to change the course of government policy. In the months following, the policy of austerity, cuts and attacks on public services and the rights of the working class deepened. The arrival of the miners’ march in Madrid in July channelled all this discontent into a huge demonstration of hundreds of thousands. The very next day the government announced a new package of cuts. Civil servants immediately took to the streets and blocked roads in asemi-spontaneousmovementthat forced union leaders to call for mass demonstrations on July 19.The government responded to this by presenting a tough budget for 2013 with new, more brutal cuts.

The national march on Madrid called by unions on September 15, while bringing together tens of thousands of activists and union delegates from across the country, was much smaller than the protests of July. Clearly, for many, yet another day of demonstrations made no sense, particularly because it was not part of a sustained plan struggle.

The mobilization of September 25 to “surround the Congress” of Deputies, in which tens of thousands, mostly youth, participated, and which had the support of more than 70% of the population, reflected the enormous social discontent which was accumulating. Finally, the union leaders were forced to name a day for the general strike on November 14.

The date was chosen to coincide with the general strike in Portugal, and was later supported by the European Trade Union Confederation which called for a European day of struggle and solidarity against austerity policies.

This is a very important step. We saw for the first time general strikes called in more than one country simultaneously. In Italy and Greece the unions called partial strikes (4 and 3 hours, respectively), while in other countries protest demonstrations were held. 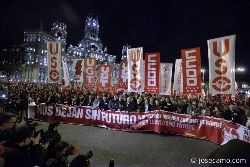 Photo: José CamóThere is a growing awareness among broad layers of the population, especially in the countries most affected by the crisis, that this is not something that affects one country or another in isolation, but is a general crisis of European capitalism. Millions have followed the development of the crisis in Greece and have realized that the austerity policies, in addition to being harmful to the working class and destroying public services, do not even have the effect of promoting a recovery in the economy. The contraction of the economy in Greece has reached 23% in the past five years and shows no signs of stopping.

Austerity leads to contraction in private consumption, paralyzes the economy, decreases tax revenues and increases the deficit increases, which then leads to more cuts in a downward spiral that seems to have no end.

The IMF forecasts a contraction this year for the economy of the European Union (EU) of 0.4%. The countries most affected are in southern Europe. Spain will contract 1.5%, Italy 2.3%, Portugal 3%, Cyprus 1.3% and Greece 5.2%. But even seemingly stronger economies such as the United Kingdom will contract by 0.6%. Germany and France remain virtually stagnant with GDP growth of 0.9% and 0.1%, respectively.The unemployment rate has reached 11.4% in the EU,with records of 25.1% in Spain, 24.4% in Greece and 16% in Portugal. In these three countries, youth unemployment is above 50%

All this is having a major impact on the consciousness of millions of workers and youth. There is a growing questioning of those governments and parties that apply austerity policies (either “social democratic” or right wing) and a growth to varying degrees indifferent countries, of those parties that are more consistent in their opposition to these policies, to the left of social democracy. So the Coalition of the Radical Left (SYRIZA), which has its origin in a sector of the communist movement in Greece, has gone in just two years from 4.5% to 30% of the vote, and is now the first party of the working class and the country.

Beyond the growth of left alternatives, there is a widespread ferment and questioning of the capitalist system and all its institutions (political parties, banks and the wealthy, parliament, justice, etc.).

The general strike in Spain was preceded by the suicide of a Egaña Amaia, a woman of 53 years in the working class the town of Barakaldoin Bilbao. She jumped out the window of her flat, on the fourth floor, the day that she was to be evicted for non-payment of the mortgage. Since the beginning of the crisis in Spain there have been more than 350,000 home repossessions (510 each day), in which the banks take the houses of families who cannot pay their mortgages (many entered into through deception and with unfair and abusive conditions at the height of the housing bubble). At the same time, these same banks receive billions of euros of public money in the form of bail out packages and amass assets of hundreds of thousands of empty new homes that bankrupt developers could never sell. This is an example of anarchy of the capitalist system that condemns millions to inactivity while there are pressing social needs to attend to.

The demonstrations which ended the general strike gave the Spanish working class a sense of strength, a feeling of excitement that was reflected in the slogan “Yes we can”. But the next day the government vowed to continue with the same policy. The question is: what next? The Marxists of Lucha de Clases (Class Struggle), within United Left, have advocated for the need to continue this fight with a steady and growing plan of mobilization that aims to overthrow the government of the PP.

It is also necessary to build a political force that can provide an answer to the central question: what is the alternative to austerity policies? Within the framework of capitalism there is no alternative. These policies are dictated by the crisis of the system. We must recognize this fact and raise clearly that the only solution is to nationalize big business and monopolies under workers’ control in order to be able to establish a democratic plan of the economy for the benefit of the majority of the population. In the discussions leading to the Federal Assembly of United Left in December, the Marxists of Class Struggle will defend this point of view.