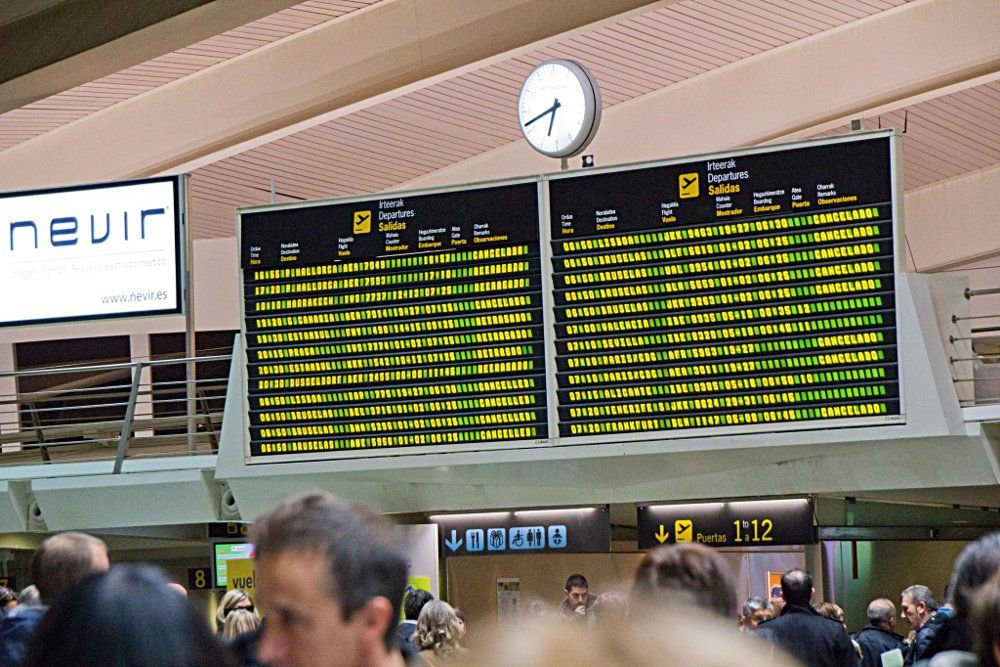 The media made a big fuss about the wildcat strike of Spanish air traffic controllers over the weekend. What they failed to explain was what was really behind the spontaneous walkout. Here we publish an explanation by a Spanish Marxist.

The Spanish Socialist Party Government, for the first time since the end of the Franco dictatorship, has decreed a “state of alert” (estado de alarma) to stop the wildcat strike of air traffic controllers. The decree represents a serious warning against future strikes.

The government has backed up its decision by referring to the constitutional right to free movement in the following terms:

"(...) The situation triggered by the dereliction of duty by civilian air traffic controllers, prevents the exercise of fundamental rights mentioned and leads to paralysis of a public service essential to society, as is the air transport service. This undoubtedly represents a public calamity of enormous magnitude (...) because of the severity of the damage caused.

“(...) To return to normal and having failed all attempts to end the existing state of public calamity, it is necessary to proceed to the declaration of a state of alert." (Royal Decree 1673/2010 of 4 December, declaring a state of alert to bring back to normal the essential public services of air transport.)

Regardless of any mistakes made by the controllers, and regardless of the fact that they are a privileged sector of employees, in terms of their economic conditions, compared to the average worker, the argument being used here is a very dangerous one in the context of the policy of cuts on the part of the government, and it is one that will be used in the next period against the working class as a whole, against any legitimate strike, as they already threatened to do against the strike of Madrid underground workers at the beginning of last summer.

The root of this conflict is in a previous government decree which set a maximum of 1670 hours of annualised work time for the controllers to prevent the abuse of overtime. But the fact is that many controllers, such as in Galicia, had already reached this limit of hours by the end of November.

Faced with this situation, the Government approved a further decree which excluded from the calculation of hours worked per year any sick leave, union leave or family affairs leave [i.e. workers would have to make up for any time taken off while sick!] At the same time, the decree threatens the workers with the possibility of militarising the air traffic controllers, denying them the right to strike which would be classed as sedition (mutiny) by imposing the Military Code of Justice on them.

All this happened within hours of the announcement of the privatisation of the airports (as part of a new package of cuts and counter-reforms decreed by the government after a meeting between president Zapatero and the 37 most powerful Spanish capitalists). For airports to be palatable to some multinationals they need to be profitable. To do this, what better way to send the message that no protests will be tolerated at airports? In addition, we must not forget the precedent of the court case against ground staff who a few years ago occupied and blocked the runways at the airport of El Prat de Llobregat, in Barcelona, as part of a protest over wages and conditions. We are therefore justified in asking the following question: now that these (the most profitable) airports, El Prat in Barcelona and Barajas in Madrid, are to be privatised, what will happen if the CC.OO. and UGT trade unions should call for a strike at AENA (the company running the airports) against the privatisation of these airports?

For years, air traffic controllers have been a privileged sector. The different governments had granted them many of their demands. They have their own corporatist union, separate from the general trade unions that organise the majority of workers. The leaders of this union of air traffic controllers have never linked up with the workers as a whole and they have considered themselves as a separate sector.

But we have to ask ourselves, why did the government introduce this new decree, which is an out and out provocation against the controllers, just at the beginning of a long holiday weekend, when there was going to be a higher number of flights?

Precisely because the controllers have never felt the need to gain the support of other workers, the government knew that tough measures, including the state of alert for the first time since the fall of the dictatorship, could win support among the wider population. Thus the government could appear as defending the interests of citizens while at the same time spreading a smokescreen over the question of the privatisation of airports.

The air traffic controllers simply walked out, provoked by the government, trapping hundreds of thousands of travellers.

We cannot let ourselves be fooled by this smokescreen. The key point is that the Government has announced the privatisation of the airports, and will therefore have to make these profitable. It has unilaterally applied a calculation of working hours that excludes sick leave (i.e. you have to make up time lost due to sickness!) and leave for trade union activities. It has imposed by decree a change in the collective bargaining agreement, and finally has sent in the police and the army to break a strike.

This sets a very dangerous precedent. Already, during the strike of the Madrid underground workers, Deputy Prime Minister Rubalcaba threatened to use the police to break the strike. We are entering a period in which trade unions will be forced to fight back against the "reforms" planned by the government.

What guarantee do we have that the same argument will not be used against the underground and bus workers to ensure the "constitutional right to free movement", or to ban a strike by teachers to "guarantee the right to education"?

If any constitutional right is being violated, it is the right to work of the millions of unemployed, or the right to housing. The only state of alert that workers are having to endure is due to the crisis of capitalism which has already led to 300,000 working class families being evicted from their homes, and 1.6 million long term unemployed workers who in February 2011 will be left without any unemployment benefit according to the recent decree approved by the Government. To guarantee the right to a job, and to protect workers against layoffs and lockouts, laws and decrees are necessary, but these should not be exceptions, but part of the day to day policies that a government which calls itself socialist should be implementing.

The extremely dangerous aspect of this situation is that it sets a precedent. Tomorrow, the right-wing PP in government will build on what has been done by the government of the PSOE and use it against the entire working class.