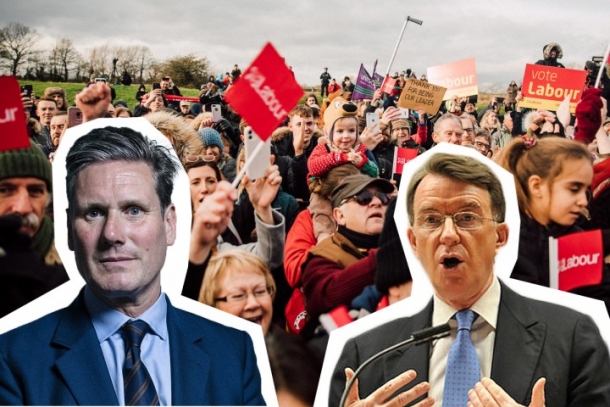 Following a fortnight of blunders, Keir Starmer and the Labour right wing are on the defensive. Bold calls for a recall conference are clearly making a mark. The left must press forward and take the fight to the right.

Lord Peter Mandelson, a key architect of the Blairite New Labour project, is set to make a return to party politics. According to recent reports, the ‘Prince of Darkness’ has been summoned from the underworld by Keir Starmer, in the hope of boosting Labour’s flagging performance.

Far from being a sign of strength, this latest move by Starmer and the right wing is a reflection of their weakness. The last couple of weeks have been amongst the worst yet for the Labour leader, with critics on all sides voicing concerns and opposition.

The campaign for an immediate recall conference has certainly played a role in putting the right wing on the backfoot. The task now for the left is to drive home this advantage, and to mobilise all our forces to this point of attack.

It is clear that the honeymoon period is over for ‘Sir’ Keir Starmer. Initially lavished with praise by the establishment for his efforts in ‘drawing a line’ under the Corbyn years, even some of Starmer’s right-wing supporters have now turned on him.

Allies in the shadow cabinet have begun briefing against the Labour leader in the press, with MPs calling for a ‘clearer vision’ in terms of what the party stands for.

And earlier this month, the supposedly ‘forensic’ Starmer was forced to issue a humiliating apology for “making a mistake” during an exchange with his Tory counterpart in PMQs.

Of most concern for the right wing, however, is Labour’s inability to take the lead in polls. Despite Starmer’s repeated promises to make the party ‘electable’, it seems that voters are not so taken with his ‘constructive opposition’ and reheated Blairism.

Labour polled at 32 % in the 2019 General Election, which we were repeatedly told was Labour's worst result in 100 years

For Starmer to be just one point ahead of that result, given the context of a Government that has allowed over 100,000 people to die is utterly pathetic https://t.co/RfXZ1HTI4M

Indeed, with the Labour leadership refusing to land any blows against Boris Johnson’s catastrophic and criminal government, the Tories are now enjoying a ‘vaccine bounce’.

A number of recent surveys put Labour as much as 5 or 6 percentage points behind the Conservatives. And this despite the UK seeing over 100,000 COVID deaths – in no small part due to the disastrous decisions made by Johnson and his reckless government.

Whom the gods wish to destroy 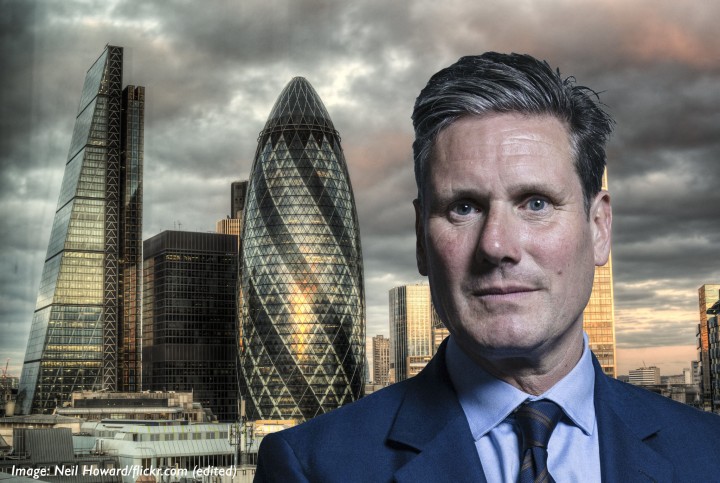 The wheels are quickly coming off for Starmer and the right wing. But this is not simply down to mistakes and errors by the leadership. After all, as the ancient Greek proverb states: Whom the gods wish to destroy, they first make mad.

Starmer’s missteps and blunders are not the product of any personal qualities, or lack thereof. Rather, they are a reflection of the enormous conflicting class pressures that are bearing down on the Labour leadership from either side.

On the one hand, with the ‘swivel-eyed loons’ running amok in the Tory Party, the ruling class is desperate for a reliable reserve team that they can call upon to serve their interests. In other words, big business wants Labour to be a ‘safe pair of hands’ for capitalism.

From the outset, Keir Starmer has been all too happy to oblige in this respect. This knight of the realm has fallen over himself in his desperation to prove what a ‘respectable’ statesman he is; to demonstrate that he is a reliable servant of the establishment.

The sacking of Rebecca Long-Bailey was an early indication of this. This was followed by the suspension of Jeremy Corbyn – first from the party, and then from the PLP: an attempt by Starmer to show how far he is willing to go in order to emphasise that Labour is under ‘new management’.

Bringing Mandelson on board is a continuation of this logic. Who better to help attest to potential billionaire donors that Labour is now “unashamedly pro-business” than the former EU trade commissioner, who once declared that he is “intensely relaxed about people getting filthy rich”?

At the same time, the capitalist press are egging Starmer to go further: to bring other Blairite relics, such Hilary Benn, back into the shadow cabinet; and to push on with the purge of left-wingers from the party.

So this political cliché from Starmer is either a signal to capital/donors, or a sign of total incoherence in LOTO. https://t.co/o67qJXUn8a

On the other side, Starmer’s efforts to shift Labour firmly to the right have collided head on with the left-wing mass membership. Tony Blair himself remarked that expunging Corbynism from the party would require the removal of hundreds of thousands of members. But that is easier said than done.

True, there has already been a voluntary ‘exodus’ of around 50,000-or-more members, who have departed out of disgust and demoralisation since Starmer became leader. Added to this are an unknown number of grassroots activists who have been suspended for speaking out against the right wing’s attacks on party democracy.

Nevertheless, the balance of forces on the ground is still not firmly in the right’s favour. The results of last year’s NEC elections showed that the left maintains a large reserve of support amongst the membership. Local CLP AGMs – already underway – will be a fierce battleground for the ongoing Labour civil war.

Despite this potential numerical advantage, however, the left has so far lacked that vital ingredient: leadership. Whilst the right wing have shown relentless determination in their aims, the left leaders have consistently vacillated, calling for compromise and ‘unity’.

But now the tables are beginning to turn. Faced with this ruthless witch-hunt and rightward drift, rank-and-file members are starting to stir and say ‘enough is enough!’

The campaign for a recall conference – launched last week, and supported by a coalition of left-wing groups and trade unions, including Momentum, the Socialist Campaign Group of MPs, Unite, the FBU, and the bakers’ union – is a shot across the bows for Starmer. The left will not be silenced so easily!

RECALL CONFERENCE MOTION
This meeting notes the escalating crisis within the Labour Party concerning freedom of debate; freedom of speech and interference in the workings of our CLPs.
This meeting believes that the party’s crisis needs to be addressed urgently.
1/5

Talk of a leadership challenge, alongside the strong echo received by the recall conference campaign amongst grassroots activists, has clearly rattled the right wing.

With the campaign receiving coverage in a number of prominent publications, such as the Huffington Post and the Independent, Keir Starmer even felt the need to come out and publicly affirm that the “vast majority of the party” backs him. Methinks the leader doth protest too much!

Some of Starmer’s aides have gone further, challenging the Labour left to “bring it on”. We say: Yes please!

The right wing have thrown down the gauntlet: Jettisoning class-based policies; offering tacit support to the Tories on questions such as the police and war crimes; suspending Corbyn and purging the left; restoring Blairite dinosaurs; and attempting to take the party back to the dark days of the New Labour years.

The left must respond with boldness and audacity. The call for an immediate recall conference must be used as a rallying cry for a militant fightback against the right – an opportunity to galvanise members around demands for party democracy, open selection, and socialist policies.

Starmer and the right wing have been stunned and dazed by this recent resistance. Now is the time to mobilise our full strength and land a knockout blow.