The message of the parliamentary elections in three of the sixteen states (Baden-Württemberg and Rhineland-Palatinate in the South West and Saxony Anhalt in the East) on March 13th, as well as the municipal elections in the central state of Hesse a week earlier, is clear.

Against the background of an increased voter turnout, the AfD was the winner of the day in cities, smaller towns and villages. It was mainly a vote of no-confidence for the major political forces as part of an expression of unrest and enormous social and political unease which has been building up over the years.

The first shock wave was triggered by the municipal elections in Hesse - the state home of the cities of Frankfurt, Wiesbaden, and Kassel - on March 6th, when the AfD scored an average of 11.9 percent of the votes cast.

Under normal conditions local elections would not find a big echo in national politics, but this time it was different. The advance of the AfD, with its mostly unknown candidates, went hand-in-hand with losses for the major political players. Both Chancellor Merkel's Christian Democrats (CDU) and the Social Democrats (SPD) lost votes. The losses for the CDU and SPD were only eclipsed by the  fall in votes for the Greens who had enjoyed an electoral hype following the Japanese nuclear disaster at Fukushima five years ago. There were some gains in votes and seats for the liberal FDP and DIE LINKE (Left Party), but this was overshadowed by the gains of the AfD.

The most dramatic result, however, was scored in the Eastern state of Saxony Anhalt where the AfD emerged as the second biggest party. 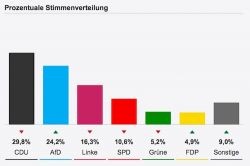 This state - home to the cities of Magdeburg and Halle - has been affected by job losses, high unemployment, large scale casualisation of labour and emigration of the younger generation to the West. DIE LINKE as well as the SPD suffered humiliating losses and the Greens were lucky to get just over the magic five per cent threshold required to enter state parliament. 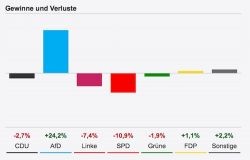 Regional leaders, DIE LINKE, had hoped that by exercising moderation they could forge a coalition with the SPD and Greens after the election. However, in the end the three parties combined scored less than a third of the votes cast.

In Rhineland-Palatinate the CDU had hoped to take over the leading role in the state government after a twenty-five year period in opposition. In the end, the CDU recorded their worst result since 1946.

This relative SPD victory is not a sign of huge support for the national party leader and Vice Chancellor, Sigmar Gabriel, but rather a defensive vote by sections of the working class. In the campaign the SPD focussed entirely upon the personality of their regional prime minister, Malu Dreyer, who was presented as a benign mother - similar to Merkel on a national level. Gabriel was largely kept away from the election campaign in order not to do too much harm to the party’s chances in the province.

The AfD scored 12.6 percent of the decisive votes cast for the party slates and emerged as the third biggest party in the Rhineland-Palatinate state parliament, leaving the FDP and Greens far behind. DIE LINKE failed to benefit significantly from the obvious protest vote, whereas the AfD had spectacular results in industrial towns such as Ludwigshafen (19.9%), Germersheim (18.1%), Pirmasens (16.2%) and Kaiserslautern (14.8%).

For decades the Southern state of Baden Württemberg, home base of Merkel's Finance Minister Wolfgang Schäuble, had the reputation of being an eternal stronghold of the CDU. The state includes cities such as Stuttgart, Mannheim, Heidelberg, and Karlsruhe and is the home of Daimler and Audi car and truck factories. Unemployment remains relatively low. After a series of scandals and protests the CDU lost power in 2011 for the first time ever and had to hand over office to a coalition of the Greens and the SPD. This time the party of Merkel and Schäuble made further losses and received an all-time low vote of twenty-seven percent. 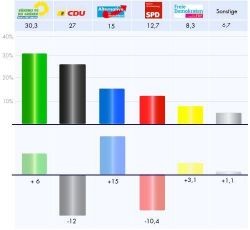 The sweeping victory for the Greens in Baden Württemberg is largely due to their leader and state prime minister, Winfried Kretschmann -  a former Maoist in the 1970s - increasingly seen by decisive sections of the bourgeoisie as the best man for the job. Whereas the CDU contender turned out to be extremely clumsy, lacking any charisma. With merely 12.7 per cent of the votes cast the SPD suffered a devastating defeat. DIE LINKE (2.9 per cent on a state level) remained stagnant and scored over five percent only in cities such as Stuttgart, Freiburg, Tübingen, and Heidelberg. The AfD scored over 15 per cent, eclipsing the SPD, and will be the third biggest party in the Stuttgart state parliament.

The revival of the liberal FDP, which lost all their seats in the national elections to the Federal Parliament (Bundestag) in 2013, indicates that the ruling class is not prepared to give up one of their traditional political tools. Important sections of big business are not fond of the AfD, which split last summer and is moving further to the right. The party was set up in 2013 by right wing ex-CDU dissidents, neoliberal professors such as Bernd Lucke, and former head of BDI, the German Industrialists' Federation, Hans Olaf Henkel.

Henkel and Lucke have founded a new extreme neoliberal party, ALFA, and now despise the AfD party and leadership which they regard as adventurist and lumpen. They have compared them with the sort of elements that set up Hitler's fascist movement in Munich in the 1920s.

There are fascist elements within the AfD, including the leadership, especially in the East where they are looking towards the neo-fascist elements in the extra-parliamentary, anti-Islamic, racist Pegida movement as their allies and storm troopers.

The more cunning AfD leaders are obviously hoping  that by emerging as the new rising force in the country they can eventually gain the confidence of the ruling class. The AfD have won the recent elections mainly with racist, anti refugee propaganda. Their programme is extremely anti-working class and reactionary.

The AfD have been strengthened by the fact that leading politicians of virtually all the major parties have tried to echo some of their racist slogans. Yet, for the time being, important sections of big business still regard the refugees as a source of cheap labour and do not favour the AfD at this stage.

What the election results show is that the superficial impression of Germany being a prosperous country with a sound export-based industry and low unemployment is misleading. There is no “feel-good factor”, but a deep social and political crisis.

Under "normal" conditions the arrival of over a million refugees should not really present a major financial or logistical problem for a rich nation comprising eighty-two million inhabitants and two million empty houses. Yet there is enormous social unease and fear for the future not only amongst the growing army of the poor but also amongst skilled workers in employment, and the middle classes.

People know and feel that social inequality is rising sharply and obviously don't have any faith that DIE LINKE or the unions, let alone the SPD, will be able to do anything about it. There is a crisis in all spheres of personal and everyday life, including infrastructure, healthcare, football, the Catholic church and top companies such as Deutsche Bank and Volkswagen.

Traditional loyalties and the political foundations and stability of the major parties are being shattered. Leaving aside regional peculiarities these elections represent a blow to the political establishment. Of course they will always cobble together some new coalitions and alliances in these states and councils, but the long term confidence in the ruling politicians, industrialists and bankers, is gone.

Political veterans are reminded of the 1993 local elections in Hesse and other state elections in the 1990s when the then-thriving right-wing party "Republikaner" and other right-wing formations scored results similar to the AfD today. Now, as then, the arrival of a growing number of refugees has served as a fertile ground for racist propaganda. Right wing demagogues blame refugees and immigrants for the evils of capitalism; the lack of decent jobs and affordable housing; threats to social security and healthcare.

But the crisis is far deeper now. Germany cannot escape the global capitalist crisis. What we see now are only the first symptoms of more extreme turbulence and earthquakes that are to come. Stability is a thing of the past. We have to prepare for a stormy period and increasing polarisation by developing a strong Marxist alternative in Germany.