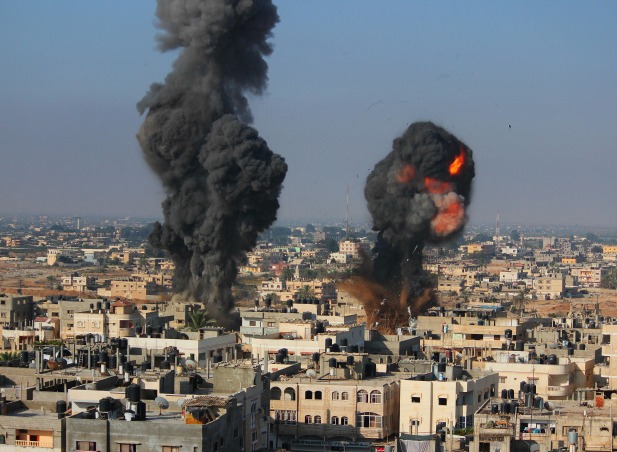 Yesterday, the Israeli army embarked on a ground offensive into Gaza. Journalists on the ground have described the initial stages of the land invasion, recounting scenes of terror as Gaza is pounded by tank, cannons, airstrikes and missiles fired from Israeli warships off the coast. Israeli forces are bombing Gaza from the air, sea, and land.

The Israeli government is playing the game of pretending to hit only “military targets”. However, the facts present a somewhat more gruesome picture. According to media reports in general around 80% of those killed so far have not been military but civilians, and of these at least one third are children. The AFP news agency has reported that Israeli tank fire killed a five-month-old baby in Rafah, in southern Gaza, early this morning. Dr Basman Ashi, director of al-Wafa hospital in Gaza, is quoted by ABC News as saying, “They are destroying the hospital,” and said he had received a phone call from the Israeli military telling him to leave.

Palestinian families in some cases have received phone calls from the Israeli military giving them five minutes to get out of their houses. Last night reports came out of whole districts and villages being told to evacuate at very short notice. The world has seen the images of children playing on a beach being bombed to pieces by Israeli warships, of whole families being destroyed, of men, women and children in utter grief at the loss of their loved ones.  And all this is done in the name of “peace”!

The International Marxist Tendency stands in total solidarity with the Palestinian people as they suffer yet another barbaric attack by the Israeli armed forces and rejects all the excuses the Netanyahu government has produced in an attempt to justify the death and destruction that it is inflicting.

The victims here are the Palestinians! Describing the situation in Gaza today, Jonathan Whittall, head of humanitarian analysis at Médecins Sans Frontières (MSF) has stated that:

“An entire population is trapped in what is essentially an open-air prison. They can’t leave and only the most limited supplies – essential for basic survival – are allowed to enter. The population of the prison have elected representatives and organised social services. Some of the prisoners have organised into armed groups and resist their indefinite detention by firing rockets over the prison wall. However, the prison guards are the ones who have the capacity to launch large-scale and highly destructive attacks on the open-air prison.”

This aptly describes the real situation. What we have here is a far more powerful war machine attacking what amounts to a defenceless population of close to two million Palestinians, imprisoned in a strip of land of 500 square kilometres.

Already before the Israeli army went into Gaza, around 250 Palestinians had been killed in the bombings of the past ten days, while only one Israeli had been reported as killed. This highlights the enormous disproportion in the might of the weaponry at the disposal of the Israeli army compared to what Hamas has built up in Gaza. Now that the troops have gone in, many more Palestinians will be killed.

Netanyahu claims that the aim is to destroy underground tunnels from Gaza into Israel. "Operation Protective Edge will continue until it achieves its objective – to restore quiet and safety to Israelis for a long time to come, while significantly harming the infrastructure of Hamas and other terrorist groups in the Gaza Strip," the Israeli government has officially stated.

This means a never-ending spiral of conflict, involving the killing of hundreds and thousands of Palestinians. How can this “restore quiet and safety” for the people of Israel? On the contrary, the butchery being carried out by the Israeli forces will enrage yet another generation of Palestinian youth. It is further radicalising the situation and preparing a new generation of Palestinians who will be prepared to fight with all means possible the hated Zionist monster that is destroying their homes and families, that is butchering innocent men, women and children.

In their attack, however, the Israeli government can always count on the hypocrisy and crocodile tear shedding of the imperialists. State Department spokeswoman Jen Psaki has publicly condemned Hamas’s “indiscriminate rocket attacks” and has affirmed US support for Israel’s right to defend itself. Then she added: “We continue to urge all parties to do all they can to protect civilians. We have been heart-broken by the high civilian death toll in Gaza.” The European Union “deeply deplores the loss of innocent lives” in Gaza but then adds that “Israel has a right to protect its population. This is the usual hypocrisy of imperialism whenever Israel attacks the Palestinians.

The fact is that Netanyahu without US imperialism supplying Israel with massive political and military backing would not be the force that it is. The reason for this is that in spite of everything, Israel remains the closest ally of US imperialism in the region. Therefore whatever differences they may have over how to manage the unstable situation in the Middle East, the US and the EU will always come down on the side of Israel.

All this started with the abduction and later killing of three Israeli youth. Immediately the Israeli media began a massive campaign to create the required national mood in favour of war, but the real reasons for this latest attack on Gaza lie elsewhere. Israel has been living through a socio-economic crisis of its own internally.

Like in all other capitalist countries the Netanyahu government has been imposing austerity measures, which has also met with mass dissatisfaction and opposition. In order to continue with its attacks on social welfare, the government has been forced to lean on more and more right wing elements, all falling over each other to be more right-wing and to whip up as much national chauvinism as possible to divert the attention of ordinary working Israelis from the real issues they are facing at home.

This requires building up the Palestinians as their common enemy that must be crushed. It is an attempt to halt the growing class divided in Israel itself. That explains why the Netanyahu government’s attempts to divert the immense class and social contradictions inside Israel towards destroying Palestinian resistance have reached such barbaric levels.

The truth is that in spite of Netanyahu’s war propaganda, a large part of the Israeli population sees the extreme right-wing parties as barbaric. There is actually an underlying polarisation taking place within Israel. A recent Knesset Channel poll has revealed that both the Labour Party and Meretz are gaining support among the electorate, and polls in general show that a majority of the population is in favour of dismantling of settlements and ending the occupation of Palestinian territory.

Another aim of Netanyahu is to break up the reconciliation talks between Hamas and Fatah and provoke a collapse of the Palestinian government. In fact, both Hamas in Gaza and Fatah in the West Bank have faced growing opposition, as mass protests emerged there also in the wake of the Arab Spring. That explains why both the Hamas leadership and Fatah were trying to reach a deal over the administration of the Palestinian territories. For the Israeli ruling class as long as there are two separate Palestinian entities, they can claim that as the Palestinians are not united, there is no one to negotiate with.

Israel’s Zionist ruling elite have no intention of granting the Palestinian people a genuine state of their own. In fact they continue to encroach on Palestinian territory, expanding the settlements and breaking up the areas inhabited by the Palestinians into what amount to Bantustans, separated from one another and surrounded by the state of Israel and its armed forces.

Way out of impasse

The Palestinian people have a right to a homeland, and so long as this is not achieved the conflict will continue. The Zionist ruling class of Israel, however, will never grant a genuine homeland to the Palestinians. That is why it must be overthrown. For that to happen, Israeli society needs to be broken down along class lines.

Class struggle on both sides is the only road that offers a solution, one that will be based on the end of Zionist rule and the establishment of a state that grants equal rights to both the Jews and Palestinians. This, however, will only be possible in a state that is controlled by ordinary working people, both Jews and Palestinians and that means a socialist state where there is no privileged ruling elite in power.