A major trade union conflict erupted in October in the Piraeus Port Authority, where dockworkers are fighting attempts to destroy all their hard-won rights, of privatisation of the port which is being handed over to COSCO, a Chinese company. After a two week strike they suspended their action awaiting results of negotiation. Now they have taken up strike action again. 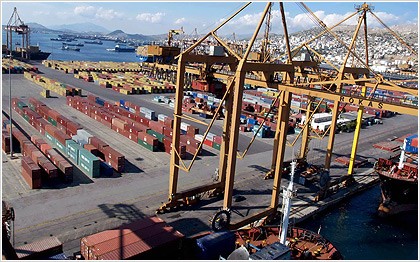 Just before it lost the October elections, the right-wing New Democracy (ND) government of Greece signed an agreement of a colonial character with the Chinese company COSCO [a unit of China COSCO Holdings, which is controlled by state-owned firm China Ocean Shipping]. According to the deal, COSCO will own and manage the Piraeus Port Authority, the biggest in Greece. The port used to be under public ownership. Since October of this year, the dockworkers have been waging a continuous and heroic struggle [on strike for more than two weeks in October], demanding the cancellation of this deal by the newly elected PASOK government. Just as with other privatizations, this will mean the circumvention of many of the rights that the workers had won through years of hard struggle and bloody battles. Let us examine some of the key points of this agreement.

First of all there are no clauses that guarantee the supervisory role of the workers and the government in terms of working conditions and hygiene in the workplace, as well as the protection of the environment. So it seems that COSCO will not be supervised by anyone. Also, it is stated that the government can only suspend this agreement if COSCO closes the port for 15 days. So when the company's interests demand it, it can close the port for up to 14 days and no one would be able to do anything about it.

However, the most important point is that there is no mention in this agreement about the dock workers being considered a special professional group that works under difficult conditions and therefore gets higher pay and better rights, such as early retirement. The rights of the workers, established by the collective agreement, will only cover the public organisations in the docks. That means that the workers in the now-privatized port will not have any coverage at all! On the other hand there is a clause that gives the right to COSCO to hire workers from the labour market, full-time or part-time, whom they will pay as unskilled and uninsured workers and can even make individual agreements with.

These measures aim to create a cheap, uninsured, and unsafe labour force that will be used in order to threaten the rest of the workers in order to reduce their own demands. Furthermore, the contract clearly states that COSCO is responsible for the “protection of public order and security of the port”. This sends a clear message to all the workers that any struggle for decent wages and rights will be faced with repression. Added to this is the very important announcement by COSCO that upon the ratification of the agreement, the company will cut 750 jobs at the container terminal section of the port. This means that from the outset 750 out of the 1600 workers will lose their jobs.

The new PASOK government, violating its pre-election commitments when it was promising "cancellation of this unacceptable contract", now states that the contract cannot be cancelled but can only be "improved in some clauses”. In fact this government, like its predecessor, has been given a clear mandate from the European Central Bank and from the local capitalists to apply a very harsh programme of generalised attacks on labour rights using the excuse of the public debt and the need to stabilise the economy. The real objective is to unload the burden of the crisis that capitalism created onto the backs of the workers. At the same time the bankers and manufacturers continue to enjoy the profits they have accumulated over the years from the suffering of the workers. Thus, privatizations (such as in education, telecommunications, ports, etc.) are an integral part of this programme, because they create new fields of investment that can provide huge profits for the capitalists.

Unfortunately, the leadership of the biggest workers’ union (GSEE) has a very similar position to that of the PASOK leadership. In their public statements, the leadership advocates the revision and not the cancellation of the agreement. A couple of weeks ago the leadership of the dock workers’ union agreed with the Minister of Finance to put a stop to the strike which had been going on for three weeks and promised to “talk about the points that can be improved” and freeze the contract with COSCO for 15 days. The leadership of the dock workers’ union should not be coming out with statements about these moves being positive, but should be calling for the cancellation and not the revision of the agreement. As the past privatizations have shown, such as those in the airlines and so forth, the bosses may retreat on some points for a while, but they will go back onto the offensive and make the conditions even worse later.

As could be expected, there were no improvements proposed to the agreement during those two weeks and the workers resumed their strike on Monday with a 48-hour strike. Another 48-hour strike was also announced for the end of the week. This is the only weapon that the workers have in the context of a wider movement of workers and youth. The dockworkers need to coordinate their struggle with the STAGE employment agency workers and the workers in the shipbuilding industries who are also on strike because, above all, only a united mass working class movement can achieve the cancellation of this agreement and a victory for themselves and the working class as a whole.

[Note: The article in Greek can be found here]