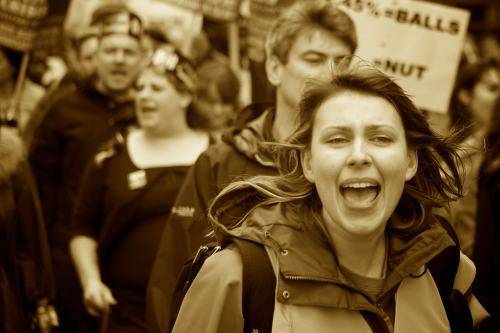 After the crisis broke out in 2008 workers and youth in Denmark were keeping their heads down in the face of attacks from the government and the bosses. Those struggles which did take place went down to defeats and therefore confidence was shaken. Now, however, with the the government's “fast-track-reform” in the universities, many youth have started raising their heads and are beginning to fight back.

In the last month we have seen a militant mobilisations by different sections of the youth. It has been a rebellion against many of the intolerable conditions that we have been forced to live under, and also against future attacks which will worsen our conditions further.

Although in the years since the crisis there was a relative lull, that has now started to change. First we saw the movement against the cut in student grants last winter and now we have the protests against the “fast-track-reform” (a counter-reform), with active resistance against the government’s austerity measures. Those sceptics who were saying that the youth are indifferent and passive must be very disappointed now. What we are seeing is only the beginning of a movement that will be followed by even greater social explosions in the future.

This rebellion is a direct consequence of an economic system that can no longer give the younger generation any hope for the future, and an expression of the anger and indignation that has been simmering under the surface for a long time.

It is not only that the future looks bleak – for many young people the present is also far from something to be excited about . We saw this expressed among the SKP-apprentices in their strike in Aalborg, which was supported by solidarity strikes by SKP- apprentices in Copenhagen . They are tired of living on starvation wages and are demanding decent conditions and wages during their training. At the same time many of them can look forward to being without a job when they finish.

This strike was started spontaneously on the initiative of the apprentices themselves. The same can be said of the university students. In response to the University of Copenhagen Board's proposal for the implementation of the “fast-track-reform”  or, as it was dubbed, the "Faster-Out-reform”,  the students began, often through their local bodies spontaneously and on their own initiative, to organize mass meetings to discuss how to react to this.

It quickly became a national struggle with actions, large meetings and pickets at major universities in the country, culminating in the big demonstration on 27th November, at Our Lady's Square in Copenhagen. 9.000 turned up even though it was only organized around the University of Copenhagen. If it had been a national demonstration the number could easily have been several times bigger. The mass struggle immediately won results: the  Minister for Higher Education, Morten Østergaard, was forced to try to postpone the implementation of the reform. The University of Copenhagen’s Board withdrew - temporarily - their proposal and at Roskilde University there were also minor concessions from the board.

The times of the nice talking around the table are over. Although there was near unanimous consensus in the academic world that this reform would mean a worsening of education, higher dropout rates, increased inequality in the education system and ultimately actually delaying students’ academic courses, all this seemed to go unnoticed by the Minister from the Radical Left (a minor bourgeois party in government with the Social Democrats and the Socialist People’s Party). He is intent on pushing the reform through at all costs as part of the government general austerity agenda, and to increase the supply of labour – i.e. unemployment - so as to lower wages. So even though he has now gone on the defensive, the postponement of the implementation of the reform simply means that it will come into force in 2015 rather than in 2014. All this is still completely unacceptable to the youth! The only language Morten Østergaard understands is a demonstration of force through mass mobilisations and mass struggle.

A leadership for the struggle

There has by no means been any lack of energy or willingness on the part of the students. There has been an impressive mobilisation of the students, which for the most part have never been involved in such kinds of struggles before and therefore have no experience of such a movement.

What has been lacking has been organisation and a clear strategy. It is therefore unfortunate that the Student Councils and their umbrella organization, the Danish Union of Students (DSF) have not put themselves more in the forefront of the movement. They are the ones that have connections throughout the campuses and also have the ability to assemble the movement nationwide. One of the weaknesses of this movement has been that much information has been haphazard because it has gone through random groups of friends, Facebook and acquaintances.

The Student Councils on each campus and the DSF nationwide are the key organizations that have the capacity to reach all students. The struggles in the 2000s showed very clearly that if the students do not show willingness to continue the struggle longer than for a single day's demonstration, the politicians do not care and simply push their anti-social policies through. It was confirmed with the SU struggle last winter, which confirmed that one cannot simply negotiate on  a parliamentary level. This was tried, and it ended up gaining nothing at all.

The last weeks of mass struggle have given greater results than all the parliamentary debates and lobbying that have been going on for the last few years combined. It is therefore important that our organizations should make plans for the struggle, how to escalate it and how to expand it.

A positive aspect of the minor demonstration of December 10 was that the Danish High School Student Union (DGS) in Copenhagen also backed it. The DSF's role should also be to reach out to all the other students, apprentices and unite all of them in the struggle for good and free education for all. Our strength is our energy and numbers, and therefore any attack on one section should lead to a wider mobilisation of the youth in the overall battle.

At the same time, it is necessary to reach out to the working class, starting with the staff at the university and their unions. They have just as much interest in the fight against all kinds of deterioration in the universities as we have. The most effective would be to involve an even wider layer of the working class. Trade Union struggles and the fight for better education are not in contradiction to each other contradiction. On the contrary, the workers have an interest in their children getting as good an education as possible and we, the youth, should not presume that our access to the university is a right set in stone.

The “fast-track-reform” will, with its increased pressure and intensity, put even more obstacles in the way of young people who do not come from affluent families that can provide entertainment, private tutoring, etc. On the other hand, students also have an interest in fighting for better wages and working conditions in a labour market which we are going to join in the future.

It is therefore necessary to connect all the struggles: the attacks on the different types of unemployment benefits, the attacks on education and the bosses’ attacks in workplaces. The working class will not accept attacks on their livelihoods forever and that is why our present struggle is only the prelude to an explosion of the class struggle in the future.

The demonstration on December 10 meant a temporary end to the joint activities that the Student Council in the University had planned before Christmas. But the next chapter of this struggle can easily be opened after Christmas with all the experience of the last month's mobilisations, and now the time should be spent in preparation: building networks, coordinating, carrying out agitation and preparation of the students to take a new step forward. First and foremost the Student Councils and the DSF must take the lead and unite the struggle. We recommend these steps as the first to be taken to win the struggle: