Workers and youth are being radicalised in Switzerland and are seeking answers to the crisis of capitalism, but their leaders are not providing those answers. That explains the successful intervention of the Swiss Marxists in recent rallies organised by the trade unions, Young Socialists and Social Democratic Party.

Last Saturday, November 15, more then 2500 people responded to the call of the Trade Unions, the Socialist Party and the Young Socialists to protest against the cuts in social spending as a consequence of the global financial meltdown. 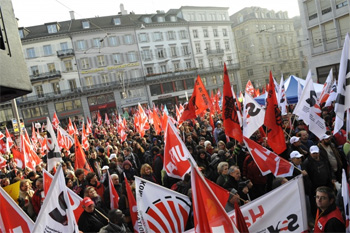 Despite the cold weather there was a kind of festive mood among the participants. This mood is explained in part by the character of the gathering that was held as a rally rather than a march through the financial district, which would have served much better to express the anger of ordinary people against "their" bankers, and in part by the moderate tone of the main speakers.

For example Christian Levrat, President of the Socialist Party, did not use the gathering to question capitalism and put forward a socialist alternative to the crisis of the system. But that was exactly what was required, and would have been welcome - which is what was confirmed by the intervention of the Marxists.

Around 20 comrades and supporters of the Marxist tendency took part in the gathering. We were the only ones to put up a stall at the gathering, which soon turned into a centre of debate, enabling us to put forward an alternative view to the main speakers. Our main ideological weapon was the recently published Manifesto of the IMT, which was published as the eight issue of the German language theoretical magazine of the IMT "Aufstand der Vernunft". 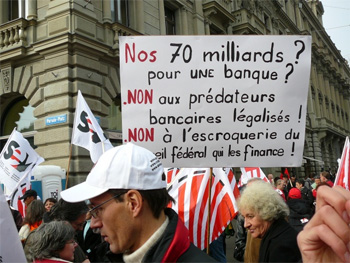 A short balance sheet of the intervention reads as follows. We sold 54 copies of the Manifesto, distributed 700 leaflets, sold 50 issues of the paper (between the German and the French editions), and also sold other Marxist literature and pamphlets, including "Reformism or Revolution" and "Reason in Revolt". At the same time we collected 70 signatures for the campaign of the UNIA-Youth calling for a 13th month's salary also for apprentices. The Young Socialists took up the same slogan as ourselves: for the nationalisation of the banks under democratic control of the workers and the people. This is just another vindication of the fact that Marxism is back on track in the labour movement.

This was already the second rally against the bailout of the banks and this time, as in the first rally, the Marxists gained a lot from it in establishing themselves firmly as a nationwide tendency. The huge interest in our ideas revealed the enormous thirst for new ideas within the labour movement. We were impressed and surprised by the fact that "Der Funke/L'étincelle/La scintilla" is already well known and has established itself as a point of reference within the organised labour movement, and that many ordinary activist are highly receptive towards the ideas we put forward. 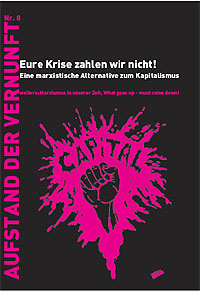 There is a clear vacuum in the movement. This is due to the fact that the reformist leaders are ideologically and politically not up to the tasks of the moment, and on the other hand the traditional left isolates itself in a left radical manner from the real movement and the class as a whole.

So it is our task to root the ideas of Marxism within the workers' movement and win the most advanced layers of the working class to scientific socialism. 160 years ago Marx and Engels explained in the Communist Manifesto:

"In what relation do the Communists stand to the proletarians as a whole?

"The Communists do not form a separate party opposed to the other working-class parties.

"They have no interests separate and apart from those of the proletariat as a whole.

"They do not set up any sectarian principles of their own, by which to shape and mould the proletarian movement.

"The Communists are distinguished from the other working-class parties by this only: 1) In the national struggles of the proletarians of the different countries, they point out and bring to the front the common interests of the entire proletariat, independently of all nationality. 2) In the various stages of development which the struggle of the working class against the bourgeoisie has to pass through, they always and everywhere represent the interests of the movement as a whole.

"The Communists, therefore, are on the one hand, practically, the most advanced and resolute section of the working-class parties of every country, that section which pushes forward all others; on the other hand, theoretically, they have over the great mass of the proletariat the advantage of clearly understanding the line of march, the conditions, and the ultimate general results of the proletarian movement."

This is what we do; it explains our attitude towards the organisations of the working class, the Trade Unions and the Social Democratic Party. In this sense we call on the honest and conscious fellow activists to take up the ideas of Marxism and join us in the fight for a socialist world.

More pictures can be found on the Website of UNIA.

Order a copy of "Aufstand der Vernunft" issue 8 from Switzerland, Germany or Austria.