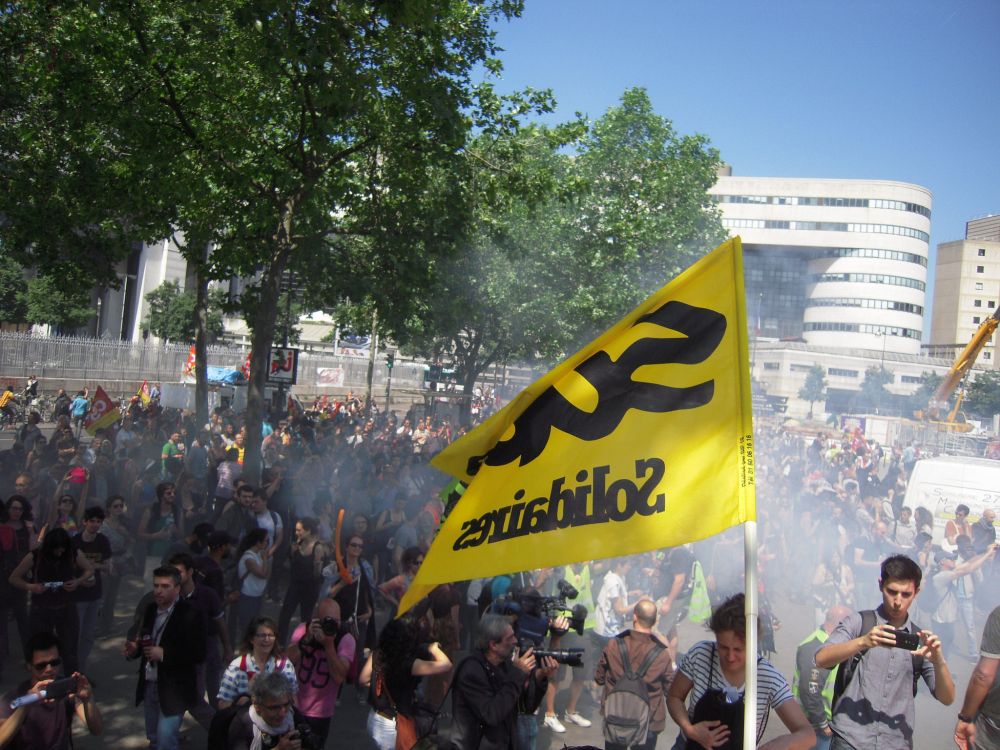 We received this appeal for solidarity from the French postal workers of Hauts-de-Seine (Paris) who are fighting against the victimisation of their shop steward.

SUPPORT THE 150 POSTAL WORKERS OF THE HAUTS-DE-SEINE DEPARTMENT IN FRANCE ON STRIKE SINCE MARCH 26TH!

150 postal workers in the Hauts-de-Seine department (92) are on strike since March 26th 2018, which represents 20% of the personnel. They are fighting against job cuts, against precarity, against the repression and against the dehumanization of the public postal service.

The authorization delivered by the Labor Minister to layoff Gael Quirante, secretary of SUD Poste 92, triggered the strike. This authorization was given even though the Labor Inspection recognized that Gael has been unjustly discriminated against due to his union activities for more than 10 years.

It is the political layoff of a class-struggle militant that is largely known and supported that sparked this strike. The first reason for why this strike goes beyond just a postal conflict: the strike impoed the right for Gael to intervene in the workplace and the recognition by La Poste as him being a union representative even with his layoff. This is an important win against an employers capacity to get rid of combative militants whenever they want and their ability to choose workers representatives for them.

The postal workers of the Hauts-de-Seine region have been able to stop job cuts for several consecutive years. If the strike wins, it will be clear that it is possible to apply and why not extend nationally a strategy that allows job cuts to be stopped, in one ofthe largest companies in the country. In response to the strike, draft legislation has been filed to reduce the right to strike at La Poste: proof that the company like politicians linked to the dominant class are taking this conflict very seriously and at a national scale.

The determination of strikers resonates the anger that a large part of the working class and the youth are feeling. An anger that is being expressed in the streets at the same time as the massive train workers and student strikes this spring. At the height of the vacation period, at the same time that Macron is undergoing political hurdles, a victory of the postal workers in the Hauts-de-Seine region would contribute to destabilizing the situation by encouraging other sectors to enter into their own struggles.

The strikers have a strategy that is diametrically opposed to the strategy of the union leadership, which are only bringing struggles to defeat by participating in the obscene masquerade of «the social dialogue» and doing everything to divide the resistances temporally and geographically. On the other hand, the postal workers of the Hauts-de-Seine are openly contesting the power to lead of the employer. Their strike is self organized: strikers decide in daily General Assemblies the direction the movement will take and they elect every day a strike committee to apply the decisions taken by the General Assembly. The strikers systematically build ties with other professional sectors (train workers, GEODIS Calberson, New Look...), with the youth, and also with struggles against racism, LGBT oppression and against police violence. These links are precious to prepare the necessary counter-offensive by the working class, which will be necessary to remove Macron and the capitalist world he represents.
If the strikers win, their strategy anchored in working class struggles and convergence of different struggles will be reinforced.

To maintain the strike, the strikers need money due to the La Poste leadership putting all of their pays at 0 euros since the beginning of the conflict: if they are unable to fill the strike fund enough they will be unable to continue the indefinite strike. Collecting money is even more difficult during the vacation period. It is now that they need the money the most.

This is why we are urgently addressing all of the international organizations and political currents of the workers movement, and anybody who would be willing to support this exemplary strike so that they can contribute to the strike fund. A call for financial support to the strike was given by Ken Loach, Olivier Besancenot, Nathalie Arthaud (LO), François Ruffin (France Insoumise MP)... but also political organizations : the NPA, the PG (Mélenchon), ANTARSYA, also union organizations like Solidaires, the CGT Labor Ministry... (See the tribune published in the french press here : https://blogs.mediapart.fr/les-invites-de-mediapart/blog/230718/ depuis-100-jours-150-facteurs-des-hauts-de-seine-se-battent-contre-la-deshumanisation).

The postal workers need to collect 150,000€ before the end of August