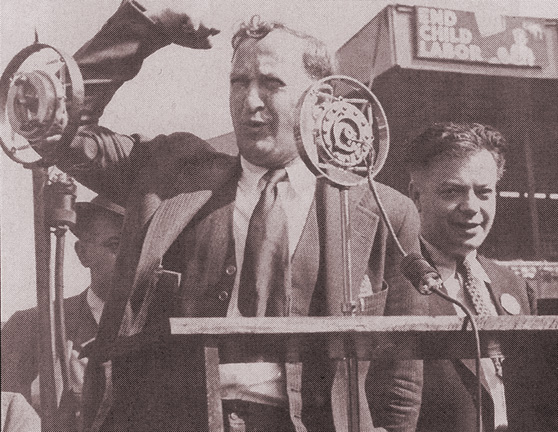 To the American Bolshevik-Leninists (Opposition)

Editors of The Militant

I follow your journal with great interest and am delighted with its fighting spirit. The history of the origin of the American Opposition is itself highly characteristic and instructive. After five years of struggle against the Russian Opposition, it required a journey of members of the Central Committee of the American party, and even of its Political Committee, to a congress in Moscow in order for the first time to find out what so-called "Trotskyism" is. This single fact is an annihilating indictment against the regime of party police rule and poisonous falsification. Lovestone and Pepper did not create this regime, but they are its staff lieutenants. I proved Lovestone guilty of gross ideological distortion (see my pamphlet Europe and America.) Under a fairly normal regime that alone would have been enough to finish a man, if not for good, for a long time, at least to compel a retraction and apology. But under the present regime, to reinforce their positions, the Lovestones need only persistently repeat falsifications that have been exposed. They do this with utter shamelessness, imitating their present teachers, or rather their administrative bosses. The spirit of the Lovestones and Peppers is exactly contrary to the spirit of the proletarian revolutionary. The discipline toward which we strive - and we strive toward an iron discipline - can be based only upon consciously won convictions that have entered into our flesh and blood.

I haven't had the opportunity for close contact with the other leaders of the American Communist Party - except, to be sure, Foster. He always impressed me as being more trustworthy than Lovestone and Pepper. In Foster's criticisms of the official leadership of the party there was always much that was true and to the point. But as far as I understand him, Foster is an empiricist. He does not want to, or is able to, carry his thinking through to the end and make the necessary generalizations that follow from his criticisms. Because of that it has never been clear to me in what direction Foster's criticism is pushing him: to the left or to the right of official centrism. We must remember that in addition to the Marxist Opposition there is an opportunist opposition (Brandler, Thalheimer, Souvarine, and others.) Apparently it is this same empiricism that suggests to Foster the whole form of his activity, which consists in leaning on Satan for a struggle against the lesser devils. Foster tries to cover himself with the protective coloration of Stalinism, and by this deceitful route to move toward the leadership of the American party. In revolutionary politics the game of hide-and-seek has never yet given serious results. Without a general principled position on the fundamental questions of the world revolution, and first of all on the question of socialism in one country, you cannot have serious and lasting revolutionary victories. You can have only bureaucratic successes, such as the defeats of the proletariat and by the disintegration of the Comintern. I don't think Foster will achieve even those second-rate aims that he is pursuing. The Lovestones and Peppers are much better suited to carry through a policy of bureaucratic centrism; lacking character, they are ready in twenty-four hours to put through any zigzag whatever, according to the administrative necessities of the Stalinist staff.

The work to be achieved by the American Opposition has international historic significance, for in the final analysis all the problems of our planet will be decided upon American soil. There is much in favor of the idea that from the standpoint of revolutionary succession, Europe and the East stand ahead of the United States. But a course of events is possible which may alter this sequence in favor of the proletariat of the United States. Moreover, even if you assume that America, which now shakes the whole world, will itself be shaken last of all, the danger remains that a revolutionary situation in the United States may catch the vanguard of the American proletariat unprepared, as was the case in Germany in 1923, in Britain in 1926, and in China in 1925-27. We must not for a minute lose sight of the fact that the power of American capitalism rests more and more upon the foundation of the world economy, with its contradictions and its crises, military and revolutionary. This means that a social crisis in the United States may arrive a good deal sooner than many think, and have a feverish development from the start. Hence the conclusion: it is necessary to prepare.

As far as I can judge, your official Communist Party inherited not a few characteristics of the old Socialist Party. That became clear to me at the time Pepper succeeded in dragging the American Communist Party into the scandalous adventure with La Follette's party. This shabby policy of parliamentary opportunism was disguised by "revolutionary" chatter to the effect that the social revolution will be achieved in the United States not by the working class but by the ruined farmers. When Pepper elaborated this theory to me on his return to the United States, I thought that I was dealing with a curious case of individual aberration. Only with some effort did I realize that this was a whole system, and that the American Communist Party had been dragged into this system. Then it became clear to me that this small party could not develop without deep internal crises, which would immunize it against Pepperism and other evil diseases. I cannot call them infantile diseases. On the contrary, these are senile diseases, diseases of bureaucratic sterility and revolutionary impotence.

That is why I suspect that the Communist Party has taken on many of the qualities of the Socialist Party, which in spite of its youth had struck me as decrepit. For the majority of these socialists - I have in mind the top strata - their socialism is a side issue, a secondary occupation accommodated to their leisure hours. These gentlemen devote six days a week to their liberal or business professions, rounding out their fortunes well enough; on the seventh day they consent to occupy themselves with the salvation of their souls. In a book of my memoirs I have tried to sketch this type of socialist Babbitt. Evidently not a few of these gentlemen have succeeded in masquerading as communists. These are not intellectual opponents, but class enemies. The Opposition must steer its course, not to the petty-bourgeois Babbitts, but to the proletarian Jimmie Higginses, for whom the idea of communism, once they are imbued with it, becomes the content of their entire life and activity. There is nothing more disgusting and dangerous in revolutionary activity than petty-bourgeois dilettantism, conservative, self-satisfied, and incapable of sacrifice in the name of a great idea. The advanced workers must firmly adopt one simple but invariable rule: Those leaders or candidates for leadership who, in peaceful, every-day times, are incapable of sacrificing their time, talents, and their money to the cause of communism, are the most likely, in a revolutionary period, to turn traitor or to turn up in the camp of those who wait to see on which side victory lies. If elements of this kind are at the head of the party, they will undoubtedly bring it to disaster when the great test comes. And those brainless bureaucrats who simply hire out to the Comintern as though to a notary, and obediently adapt themselves to each new boss, are no better.

Of course the Opposition, that is, the Bolshevik-Leninists, may have their fellow travelers who, without devoting themselves wholly to the revolution, offer this or that service to the cause of communism. It certainly would be wrong not to make use of them; they can make a significant contribution to the work. But fellow travelers, even the most honest and serious, should make no pretense to leadership. The leaders must be bound in all their daily work with those they lead. Their work must proceed before the eyes of the ranks, no matter how few the ranks may be at the given moment. I wouldn't give a cent for a leadership that could be summoned by cable from Moscow, or anywhere else, without the ranks ever noticing it. Such a leadership guarantees failure in advance. We must steer our course to the young worker who desires to understand and to fight, and is capable of enthusiasm and self-sacrifice. These are the people from whom we must attract and educate the genuine cadres of the party and the proletariat.

Every member of the Opposition should be obligated to have under guidance several young workers, youth from fourteen to fifteen years of age and older; to remain in continual contact with them, help in their education, train them in questions of scientific socialism, and systematically introduce them to the revolutionary politics of the proletarian vanguard. Oppositionists who are themselves unprepared for such work should entrust the young workers they have recruited to more developed and experienced comrades. We don't want those who are afraid of rough work. The profession of a revolutionary Bolshevik imposes obligations. The first of these obligations is to win over the proletarian youth, to clear a road to its most oppressed and neglected strata. They stand first under our banner.

The trade-union bureaucrats, like the bureaucrats of pseudo-communism, live in an atmosphere of aristocratic prejudices of the upper strata of the workers. It would be tragic if the Oppositionists were infected even in the slightest degree with these qualities. We must not only reject and condemn these prejudices; we must burn them out of our consciousness to the last trace. We must find the road to the most unprivileged and downtrodden strata of the proletariat, beginning with the Negroes, whom capitalist society has converted into pariahs, and who must learn to see in us their brothers. And this depends entirely upon our energy and devotion to this work.

I see from Comrade Cannon's letter that you intend to give the Opposition a more organized form. I can only welcome that news. It is wholly in line with the views expressed above. A well-formed organization is needed for your work. The absence of clear organizational relations results from intellectual confusion, or leads to it. The cry about a second party and a Fourth International is merely ridiculous and should be the last thing to stop us. We do not identify the Communist International with the Stalinist bureaucracy, that is, with the hierarchy of Peppers in different stages of demoralization. At the foundation of the International there lies a definite set of ideas and principles, conclusions from the whole struggle of the world proletariat. We, the Opposition, represent those ideas. We will defend them against the monstrous mistakes and violations of the Fifth and Sixth Congresses and against the usurping apparatus of the centrists, one wing of which is going over to the Thermidoreans. It is all too clear to a Marxist that, in spite of the enormous material resources of the Stalinist apparatus, the present ruling faction of the Comintern is politically and theoretically dead. The banner of Marx and Lenin is in the hands of the Opposition. I have no doubt that the American contingent of the Bolsheviks will occupy a worthy place under that banner.