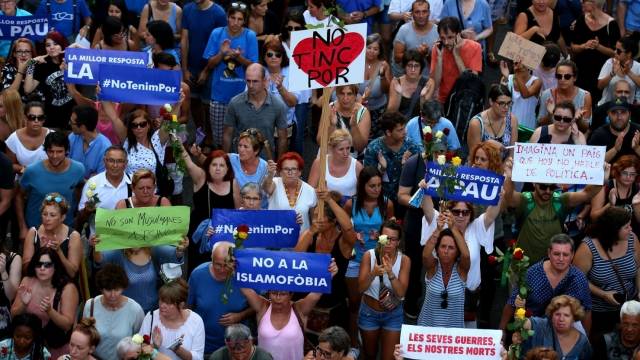 A week ago, Catalan and Spanish society was shaken by two deadly terrorist attacks in Barcelona and in the town of Cambrils. The forces of reaction immediately seized the opportunity to spread their racist venom, to sow fear and division, and to promote repressive measures at home and step up their imperialist interventions abroad.

Perhaps most notably, right-wing commentators attempted to turn the attacks against Catalan self-determination and against the independence referendum of October 1. They viciously attacked the nationalist government of Catalonia and the Catalan autonomous police. They also turned the incident against the left-wing party Podemos and their allies in the Barcelona city council, led by left-wing mayor Ada Colau, who were accused of not doing enough to combat terrorism.

All this hysteria backfired spectacularly on Saturday 26, when a mass, state-sponsored demonstration was called in Barcelona, which was attended by half a million people. This was meant to be a show of force by the Spanish state, and an occasion to reassert its tarnished prowess in Catalonia. Not only did Rajoy and his entire cabinet attend the march, but also king Felipe VI – the first time a Spanish monarch has attended a public demonstration. Great momentum and expectation were built up around the demonstration by the Spanish bourgeois media. But things went terribly awry. The representatives of the Spanish state first had to stomach the embarrassing decision, taken by Ada Colau under pressure from the left-wing CUP (Popular Unity Lists), to put political representatives out of the limelight. They were placed in a second bloc behind the opening banners, under the slogan No tinc por (I’m not afraid), which were carried by workers involved in the emergency operations on the day of the attack: doctors, nurses, firemen, public transport operators, and also some police, and representatives of various neighbourhood associations and of the Islamic community.

Standing in the background, the king and the PP politicians had to undergo the deafening booing, whistling, and jeering by thousands of protesters. For the entire duration of the march, Rajoy and Felipe VI had to put up with this constant, unabating heckling. This represents an unprecedented embarrassment for the monarchy and the Spanish state, and, by extension, of the Spanish establishment and of the post-Franco regime. The right-wing media could not conceal the booing, and could not present it as the act of small groups of troublemakers, but had to admit, with bad grace, that the majority of demonstrators were hostile to the presence of the president and the monarch.

In contrast, Ada Colau, the leader of Podemos Pablo Iglesias, and the politicians from the centre-left nationalist party ERC (Catalan Republican Left) were cheered. Catalan president Carles Puigdemont was also acclaimed, even if he is a cynical, demagogic right-winger, which reveals the contradictory sentiments of the crowd. However, for many ordinary left-wing Catalans, the reactionary character of Puigdemont is easy to forget in view of the deluge of preposterous accusations thrown against him by the Spanish establishment, and by the fact that he has craftily cultivated the support of the left-wing nationalists of ERC.

Not only were Rajoy and the king booed: they were completely surrounded by a swarm of pro-independence estelada Catalan flags, and also a few Spanish republican flags, and by extremely militant banners calling for peace, for freedom, against racism and Islamophobia, and, most significantly, denouncing the dealings of Spanish capitalism, and personally of the king, with the Saudi monarchy. The most visible banner read: “Felipe, people who want peace don’t deal in weapons”. Only a few metres behind the king stood a massive banner that cut through the entire march with images of Felipe with Saudi sheikhs and of Bush, Blair, and Aznar, the sponsors of the 2003 Iraq war, and with the slogan “your policies, our dead”. A similar banner was held side-up for helicopters to see. There were placards directly linking the terrorist attacks in Barcelona with the wars in Iraq and Afghanistan. A small group of monarchist protesters carrying Spanish flags had to be escorted out of the march by police due to the constant heckling by the demonstrators.

These are extremely advanced slogans, that relate terrorism with the imperialist policies of Western powers in the Middle East and with fundamentalist dictatorships like Saudi Arabia that are propped up by the West. The Spanish establishment is visibly discomfited. Even the official slogan No tinc por is disliked by the right wing, which wanted to generate fear and inaction. Conservative newspaper El Español wrote in its editorial: ‘the main slogan of the demonstration itself is objectionable, because after what happened in Barcelona, and in other European cities, the normal thing would be to “be afraid” before the random and indiscriminate character of Jihadist attacks’ (El Español, 26/08/2017).

It is very significant that the right wing has not been able to capitalise on these attacks as they had intended. Despite all the official propaganda hundreds of thousands mobilised behind anti-war, anti-racist and anti-monarchy slogans. The role in these events of the radical pro-independence Catalan left, namely of the CUP (Popular Unity Lists) has been particularly praiseworthy. From day one, they refused to enter into any bloc with the Spanish establishment, and bravely put the blame for Islamic fundamentalism on the imperialist policies of the government and its allies abroad. On the day of the demonstration, they organised a separate march, called jointly with a large number of civil society, left-wing, and neighbourhood associations, in opposition to the presence of Rajoy and the king in the official march. This has contrasted with the position of Podemos and Ada Colau. Despite their correct criticisms of the warmongering policies of Rajoy and of the close personal connections of the king with the Saudi monarchy, they have fallen for the calls of national unity and opposed attempts to “politicise” the march (as if the presence of Rajoy and the king was not a blatant attempt to politicise it). They could learn a thing or two from the CUP!

However, although we applaud the courage of the CUP comrades, we must also say that their correct criticisms of Spanish imperialism contrast with their support for the nationalist, right wing-led coalition in Catalonia. The conservative nationalist party PDeCAT (the Democratic European Party of Catalonia), which heads this coalition, has historically served as a useful ally of Spanish imperialism in the parliament in Madrid. For instance, they voted in favour of the bombing of Libya in 2011, and had previously supported the different stages of the operation in Afghanistan. More recently, they have agreed in principle to sign the Spanish counter-terrorism pact sponsored by the PP. This party also stands for the interests of the Catalan bourgeoisie, which is no less rapacious than its Spanish counterpart, and its foreign allies are no less contemptible, having close connections with Qatar in particular. A consistent battle against the warmongering, capitalist policies that have ravaged the Middle East and laid the seeds of Islamic fundamentalism, and which have turned the neglected inner cities of many European cities into a breeding ground for Jihadists, requires a struggle against the ruling class both of Spain and of Catalonia, a struggle that can rally and win over the workers and the oppressed of both Spain and of Catalonia.