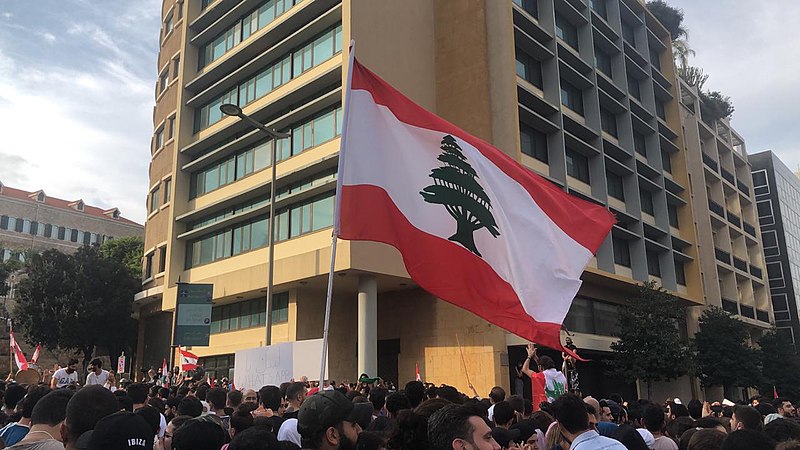 The Lebanese government has resigned under pressure from the masses. This is an inspiring achievement, but the revolution must not stop here. Instead, it should take power into its own hands.

On 10 August 2020, Hassan Diab gave his resignation speech. He lamented a corrupt and criminal political system and spoke of his desire to stand with the people. He continued, speaking at length on the bold reforms they had attempted. Finally, he concluded by stating three times, “May God protect Lebanon.”

Lebanon does certainly need protection – from the ruling class that is destroying it. The prime minister's resignation comes as a result of a valiant mass movement in Beirut. In a show of impressive force, thousands have marched in the street for three consecutive days. Facing rubber bullets and tear gas, the masses were not deterred. In fact, the movement was only emboldened by such repression. Weak and divided as ever, Lebanon’s government quickly declared that it would be resigning.

This is a great victory and shows the power of the on-going mass movement. In less than a year, the Lebanese masses have toppled not one but two corrupt governments. However, it is important that the movement does not rest on its laurels but instead absorbs the lessons of the past year of protests. Hassan Diab, we must not forget, was ushered in as Prime Minister with the promise of reforming Lebanon. This proved to be an empty promise. Instead, the conditions of working people in Lebanon dramatically worsened. The last straw was the Beirut explosion, which devastated the capital and left over 300,000 people homeless. This resignation finds the Lebanese people in a similar situation to last year, when the Hariri government resigned.

It has become clear that it is not enough to simply topple the government, something more must be done.

BREAKING: "I declare today the resignation of this government."

Lebanon's PM Hassan Diab announces the resignation of his gov't amid anger over the Beirut blast.

Hassan Diab: a legacy of failure

In the leadup to the formation of the Hassan Diab government, there was much discussion in the movement surrounding the need for a ‘technocratic government’. At the time, we explained that this would be no solution. It is a utopian dream to think that unbiased and impartial state administrators can be plucked from a corrupt system to grant justice to the masses. We need only look to the track record of the Hassan Diab government, which was filled with technocrats deemed to be professional and separate from the existing political order, to show this.

The track record of the government is not hard to observe – precisely because nothing has changed. Hassan Diab boasted after the first 100 days of his administration that many changes had been made. The government passed anti-corruption legislation, including an audit into the central bank, which would help clear out the corruption and place Lebanon on the road to economic recovery and give confidence in foreign investors to invest in the Lebanese economy. However, such legislation did nothing in practice. It was blocked in parliament, and the small provisions that did pass went unenforced by corrupt officials. Continuously, the ruling class of Lebanon has used every measure at its disposal to block the reforms needed.

This should not come as a shock. Many of the technocrats themselves were in actuality tied to the political establishment and unwilling to openly fight the established powers. Diab was an ally of Hezbollah, which backed the government. President Michel Aoun also remained firmly in government. Asking this government to reform the system is tantamount to asking a leopard to change its spots. They are the same crooks and criminals that benefit, and continue to benefit, from the corruption that has plagued Lebanon. In other words, they are the one and same ruling class.

As Diab and his friends in power enjoyed their seats, the masses continued to starve. It is evident why the ongoing movement has been called “the Revolution of the hungry”, as the country heads for famine within the next few months. Despite the hardships, the movement continued with sporadic protests throughout the Diab government's tenure. In the wake of the Beirut explosion, the movement was reborn with thousands upon thousands in the streets. This movement has renewed and emphasized the slogan “All of them means all of them”, which is fundamentally correct. Here lies the answer to Lebanon’s woes. The problem in Lebanon is not this or that politician, but the entire corrupt system and the ruling class that benefits from it. Technocrats are not the answer, and the Diab government has shown that.

BREAKING: Lebanon's Prime Minister has announced the resignation of the country's government.

The revolution must continue

Although most people celebrate the toppling of this government, Hassan Diab has not left office yet. He is remaining for a time in a ‘caretaker’ government, which will oversee the negotiations between all of the different ruling factions. These negotiations will take months or longer, and will no doubt result in a shuffling of the deck and the creation of a ‘new’ government. This government will be made up of the same ruling class that has brought Lebanon to this impasse, and will no doubt be as impotent as the Hassan Diab government before it.

Some members of the ruling class have used this opportunity to revive suggestions that, whatever government is formed, it must be one that is able to negotiate with the IMF. The parties overthrown by the revolution of October last year are already positioning themselves to come back to power. Facing famine, a virtual economic collapse, and a massive currency devaluation, many are placing their hopes on the IMF for a bailout of the economy. However, the IMF has been abundantly clear that it will not carry out such a bailout without major reforms. This coded language is not hard to decipher. It will require major cuts to working people's lives. In other words, the ruling class in Lebanon can continue to run the country while the Lebanese masses pay for the crisis. All under the responsible eyes of the IMF, of course. This would not resolve the poverty and hunger facing Lebanon.

But there is another way. The solution to Lebanon’s problems is not to rely on the IMF or the existing ruling class, but instead for the revolution to take power into its hands. The masses in Lebanon have fought a long and courageous struggle. They have resisted attempts to divide them and have toppled multiple governments. Now, they must not only topple this government, but replace it. The revolution must involve all sections of the workers and the poor across the sectarian divide and begin to run society itself. Under a democratically planned economy, controlled by working people, Lebanon can use the resources of the ruling class to rebuild Beirut. The wealth of the millionaires and billionaires of Lebanon, fortunes built through corruption, should be seized by this new workers’ government and used to rebuild Lebanon entirely. Only in this way can Lebanon rise above the impasse, and end the corruption permanently.

We will be hosting an online meeting about the situation in Lebanon on 12 August. More details here.