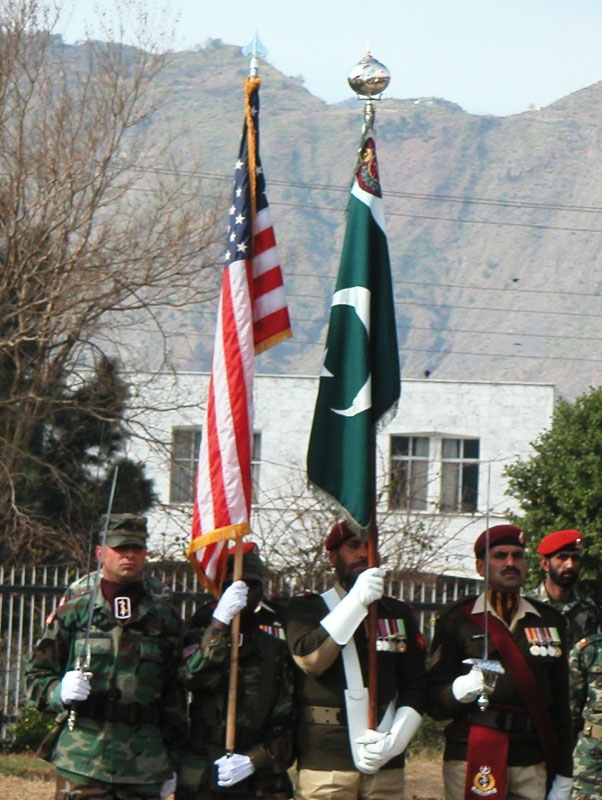 The ferocity with which the “international community” and world media have demonised, ridiculed and condemned the Pakistani state has baffled the local ruling elite here in Pakistan. The stinging attacks on the ISI [Pakistan’s secret services] and the establishment by the imperialist think-tanks and intelligentsia are unprecedented.

A “failed state”, “most dangerous place in the world”, “breathtakingly duplicitous”, “treacherous” are some of the words used to describe the Pakistani state. The Economist wrote in its latest edition, “If it were located anywhere else, Pakistan – which also has the world’s worst record on nuclear proliferation – might be treated as a rogue state”.

All this may be partially or even totally true for Pakistan’s elite, its ruling classes and its distraught state apparatus. But the reality is that whatever state we have in Pakistan. it is the making of the imperialists themselves. There is no doubt that the historically belated and economically weak ruling classes were forced to rely on imperialism and coalesce with the remnants of feudalism right from the inception of the country.

Hence they slavishly followed the US dictates in the post-Second World War period when British imperialism was in rapid decline. The imperialists intervened directly in the formation of the economic, political and foreign policies of the country. From 1947 onwards almost every government till today has served American interests. Some of the senior cabinet ministers, generals, diplomats and selected civil servants have often reported directly to Washington, circumventing their own respective chains of command.

During Jinnah’s lifetime Feroze Khan Noon the pro-British Muslim League leader and later prime minister, submitted a crude “confidential referendum” to the State Department under George C. Marshall, which said, “The mussalmans in Pakistan are against communism... If the USA helps Pakistan to become a strong and independent country... then the people of Pakistan will fight to the last man against communism...”

The US has been involved in the regime changes right from the beginning. When martial law was first imposed in 1958, the US National Security Council gave full backing to the new military regime. The fully endorsed statement read, “Pakistan has been replaced by a relatively stable military regime... the present political situation should be conducive to the furtherance of U.S. objectives...” General Ayub Khan responded in his speech in the first cabinet meeting, “As far as you are concerned, there is only one embassy that matters in the country: the American embassy.”

In the late 1970s with the worsening crisis, General Zia ul Haq’s brutal dictatorship became the lynchpin of U.S. strategy. That was the reason why Washington green-lighted Bhutto’s execution and turned a blind eye to Pakistan’s nuclear programme. The cunning Zia understood this and instructed the then ISI chief Gen. Akhtar Abdul Rehman that, “The water in Afghanistan must be made to boil at the right temperature.”

However, this is not the first time that the Americans have fallen out with the Pakistan army. When Zia was trying to go too far in Afghanistan and was contemplating flying the crescent and star Islamic flag over the central Asian states, he became a liability for his masters and what happened next is an open secret.

Although the Islamic fundamentalist methodology was part of US strategy for some time, it was boosted by the ideological formulation given to it by the notorious “butcher of Vietnam”, Samuel P. Huntington. In the summer of 1993 he wrote an article in Foreign Affairs titled “The Clash Of Civilizations”. He argued that henceforth culture, not politics or economics, would dominate and divide the world. Huntington concluded on a sinister note, “the world is not one. Civilisations unite and divide mankind... blood and belief are what people identify with and they will fight and die for.” It was precisely this reactionary theory that Osama bin Laden had pursued and led him to carry out such brutalities. He framed and fought his jihad on the “clash of civilisations”. Some serious strategists of imperialism are worried that after the elimination of Osama there might be need to further invigorate this contradiction to suppress the real contradiction in society, the class contradiction.

The right wing in Pakistan has raised a hue and cry to defend the army with hyped up anti-American rhetoric in talk shows and the printed media. Firstly, anti-imperialism is not necessarily anti-Americanism. After all, the American workers and youth are also the victims of US imperialism. The American proletariat will play a decisive role in the socialist transformation of society. In a certain sense, they will be the vanguard of the world proletariat.

At the same time the Americans can neither trust nor abandon the Pakistan army. As the crisis exacerbates conflicts open up between them, but after a while are reconciled by the desperate needs of the exploitative capitalist system they are based upon and the interests of which they are created to defend. Any genuine anti-imperialist struggle has to be linked to the overthrow of capitalism in Pakistan or any other country. The religious fundamentalists and the right wing are the most ardent adherents of this cruel system.

Pakistan today, economically, socially, politically and morally, is in a worse state than ever before. This is the result of the extreme rottenness of Pakistani capitalism. This is the Pakistan of the subservient elite who rule and own this country. But there is another Pakistan. The Pakistan of 180 million, the workers, the peasants and youth, who are exploited, deprived, brutalised and made to suffer by this very elite and its state. These working masses are disgusted by the venality of Pakistan’s ruling class and imperialists. They detest the fundamentalist terror and imperialist slaughter. There was no mass mourning, nor any celebrations at the death of Osama bin Laden in Pakistan.

As the corrupt stooges of imperialism are at the helm of affairs, their infighting is intensifying for a greater share in the plunder. The imperialists, who are already squeezing the blood and sweat of this “other” Pakistan, want even more. They want their political and military elites to be even more subservient. But in the lust for more sometimes even the dog bites the master’s hand. The crisis of the system is not going to abate. Any stability, respite for the masses or prosperity in society is a utopia, considering the severity of the socio-economic crisis and its perspective of continuous decline in the times ahead.

This misery, poverty and destitution are not the destiny of the toilers of this land. The only salvation is for the “other” Pakistan to rise as their predecessors did in 1968-69. They have a historic pledge to redeem. They have to complete an unfinished revolution. And arise they will, sooner rather than later.