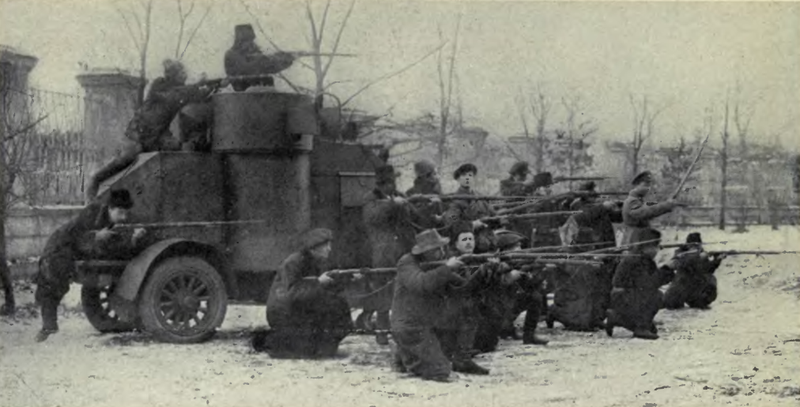 The October Revolution was an earthquake that sent shockwaves throughout the world. The idea that workers could take power into their own hands and run society without the need for kings, queens and capitalists had a big impact amongst the working masses throughout the world. For this reason, the ruling classes of all countries united in an effort to crush the new workers state in its infancy.

In Russia, after the revolution, the former Minister-Chairman of the Provisional Committee, Alexander Kerensky, and his generals made attempts to overthrow the newborn Soviet regime. But faced by the mobilization of the Petrograd workers, their offensive was a total failure. 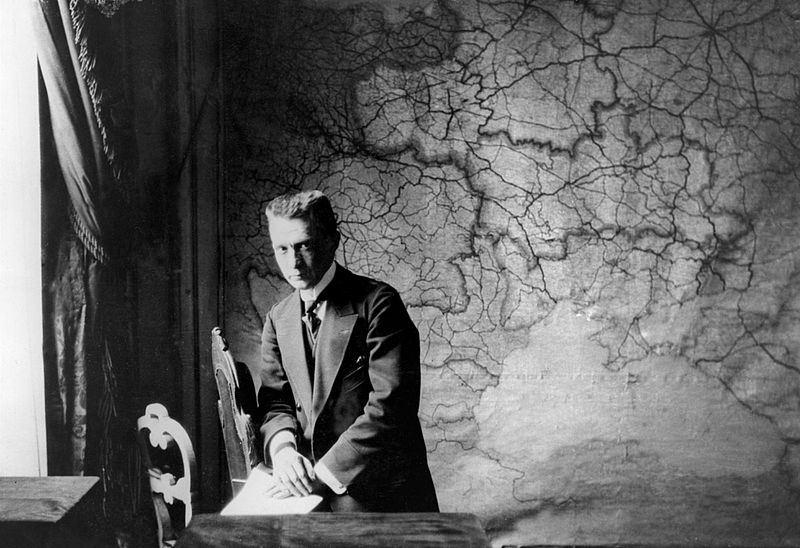 Initially, Lenin seemed to be right when he declared that the civil war phase of the revolution was over and that the Bolsheviks could now concentrate on the peaceful construction of the new regime. But this idea was soon to be shattered by events.

Whereas the anti-communist counter-revolution – also known as the White movement, as opposed to the Reds – was militarily and politically defeated, its leaders who were living on the country's borders received enormous military assistance from the great imperialist powers of the time. This started already in the early days of 1918. White units were equipped with high-tech weaponry, such as tanks and planes: all things that were lacking to the young Soviet republic.

Every imperialist power found itself a stooge fighting in the civil war: Ataman Skoropadsky in Ukraine and General Krasnov on the Don river were supported by the Germans; general Denikin in the south was helped by the French; admiral Kolchak in Siberia received full support from the Japanese and the British, who also helped general Yudenich on the Baltic front. Beside this material help, imperialists troops landed directly in Russia as early as 1918. While the Germans were invading Ukraine and the Baltic countries, British forces occupied Baku in the Caucasus, Arkhangelsk and Murmansk in the North. After a while, French soldiers took over from the Germans in Ukraine and Crimea, while Japanese and US troops were attacking Vladivostok and the Russian Far-East. 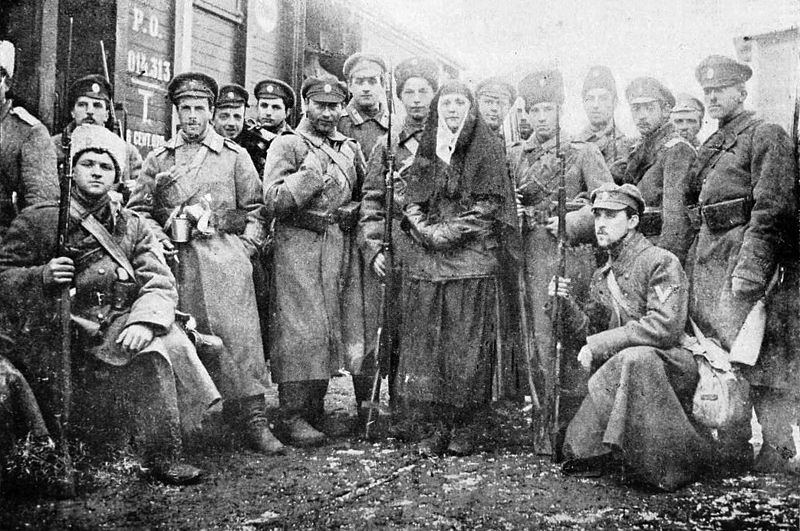 The capitalist powers' intervention was justified by the will to crush the global threat posed by the Russian Revolution. In Russia, the workers had taken power in their hands and set an unbearable example for the world bourgeoisie. The Russian Revolution had to be “strangled at birth” as Winston Churchill said. The Russian Civil War very early on acquired an international nature, embodied by the French warships anchored in the Black Sea harbours.

This feature of the Civil war was not limited to the side of the counter-revolution, but also found an expression on the Bolshevik side. Numerous foreign activists were present in Russia at the time and were used for internationalist propaganda by the new regime. A special attention was devoted to the foreign troops stationed in Russia. Many agitators and propagandists were sent to explain to these men why their governments sent them to fight in Russia while the world war had been over for months. Many of these activists paid for their internationalism with their lives. For instance, the French teacher Jeanne Labourbe, won over to socialism as soon as 1905, was murdered by French army officers in Odessa in 1919.

This propaganda had a big impact: almost every foreign corps stationed in Russia was subject to mutinies, during which soldiers refused to fight and even sometimes tried to go over to the Red Army. The French navy was particularly plagued by this movement. During the spring of 1919, two successive waves of mutinies rocked the warships sent in the Black Sea. The first, organized by socialist activists drafted in the navy, tried to go over to the Red side with some warships after mutiny. It failed, but sparkled a second wave, aimed at delivering the jailed mutineers, improved living conditions, and putting an end to the French military intervention. The mutiny forced the French government to repatriate the fleet in France, without putting an end to the revolt, which arose soon after in French military harbors such as Lorient, Brest or Toulon. This episode is not an isolated one as British army was also forced to repatriate its forces after a wave of mutinies.

Many mutineers and deserters succeeded in joining the side of the Red Army. French army captain Jacques Sadoul, who was in post in Moscow during the war, deserted to the Red army in 1918 and joined the Bolshevik party. He also served in the propaganda services of the Red Army. He met there tens of thousands of foreign volunteers. Some of them were foreign workers (notably Chinese) who had been treated as a second-rate workforce under the Tsarist regime. They massively rallied to the revolution: were exposing themselves to be massacred if captured by the racists white troops.

Numerous war prisoners from the central powers were also in Russia at the time of the October Revolution and thousands of them joined the revolutionary forces. Austrians, Germans, Hungarians, Czechs and so forth fought in the ranks of the Red Army.

This situation is not a peculiarity of the Russian civil war. Way before the 1917 revolution, during the Paris Commune of 1871, while Bismarck was helping the counter-revolutionary armies of Versailles – his recent enemy – Italian volunteers fought in the Commune's army, which was led by a 34-year-old Pole, Jaroslaw Dombrowsky. 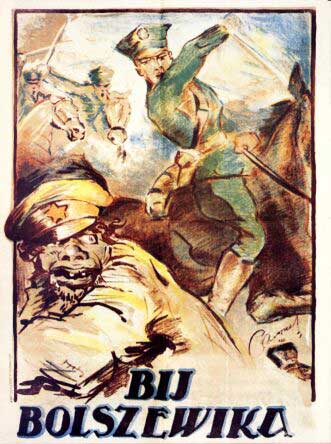 At the end of the Russian Civil War, the bourgeoisie was forced to renounce to its direct aggressions toward the Russian Revolution, fearing it would spark revolutions in the West. When the British government tried to support White Poland in its war against Russia, it was the threat of a general strike that made it pull back. British premier Lloyd George said at the time that a new war against Russian Soviets would bring Soviets to Britain. This fear was justified. From 1918 to 1923, capitalist Europe was the theater of many revolutionary upsurges. In Germany, Italy, Austria and elsewhere, the power of the bourgeoisie, who had just showed its true colours with the bloody slaughter of the world war, was assaulted by the working-class. The workers were defeated only by the inexperience of their revolutionary parties and the betrayal of reformist leaders. In Hungary, the bourgeoisie even needed an armed intervention by France and Romania to crush the Workers’ Republic and impose a military dictatorship on the Hungarian people.

All these events show that the 1917 revolution was not a purely Russian affair, but a global event, in fact the first step of the world socialist revolution. For millions of workers and peasants around the globe, the programme of the Bolsheviks connected to their own problems: war, poverty and exploitation. This unity of interests is a perfect demonstration of what Marx wrote in the Communist Manifesto: “The working men have no country”, as their interests are not defended by existing nation-states: these are tools in the hands of their exploiters. Proletarian liberation will need a common struggle above national borders.

If international solidarity is often a spontaneous reaction during revolutionary times, it needs to be organized if it wants to be victorious. The Bolsheviks understood this very well. That is why, since the day after the revolution, they devoted themselves to the construction of a new revolutionary workers’ international. This task is still as relevant as it was then. If you want future revolutions to be successful and the dawn of a new and better world, you have to build an international revolutionary communist movement in preparation. Join us in the building of the International Marxist Tendency!