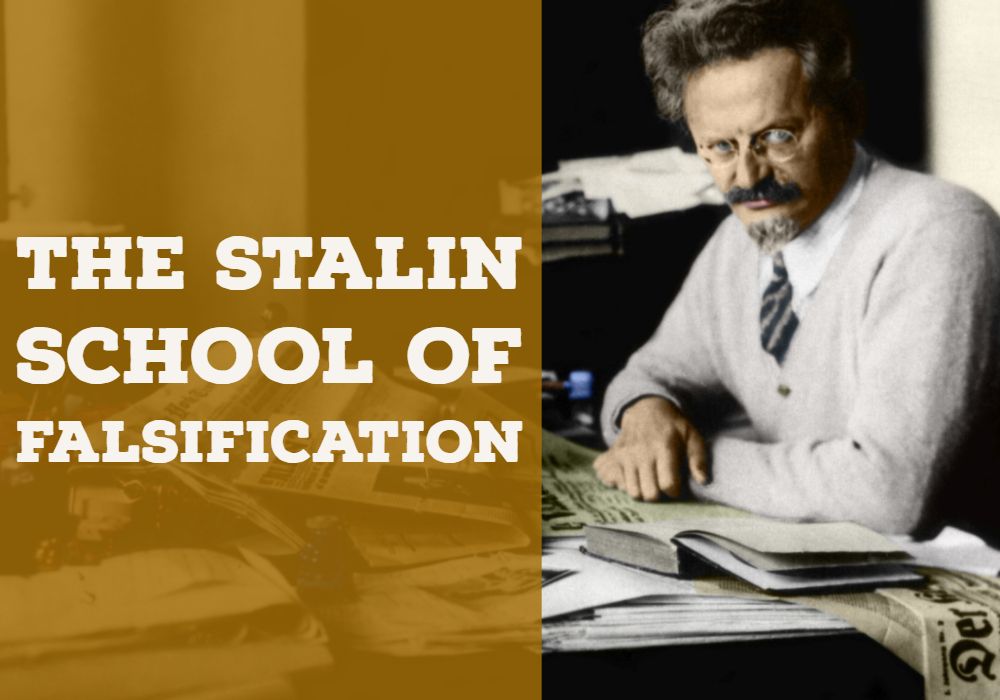 The schema of the October overturn in the official delineation has undergone, as is well known, interminable changes in obedience to the political needs of the ruling group. The final version now set forth may be briefly formulated in the following words: Lenin demanded that the insurrection be expedited in every possible way. Zinoviev and Kamenev came out against the insurrection. Trotsky sought to defer the question of the insurrection to the Congress of the Soviets on October 25 (November 7). Lenin implacably fought against the “constitutional illusions” of Trotsky, who placed the question of the material seizure of power in dependence upon the Congress of the Soviets. The Central Committee, under the leadership of Stalin, supported the position of Lenin, and only thus was the October victory assured.

The exposition of the actual course of events in my History of the Russia Revolution did not leave, I venture to believe, a stone unturned in exposing this historical falsification. I am now compelled to say that I could have been far more sparing of proofs, had I in my possession, when working on the History, the document which I succeeded in locating only later.

On the 23rd of April 1920, the Moscow organization celebrated Lenin’s fiftieth birthday, in the absence, to be sure, of the guest of honor who was not fond of such projects. One of the orators at the celebration was Stalin who, as we shall see presently, missed a wonderful opportunity to remain silent. The Moscow Committee published the jubilee speeches in a booklet on grayish paper (the year, 1920!) which has since become a bibliographical rarity. This tiny book has been forgotten by everybody, and those who are informed dare not mention it: An unseasonable reminder of historical facts can nowadays cost a man his head.

In a very short and incoherent speech, Stalin set himself the task of pointing out “one trait [of Lenin’s] about which no one has as yet spoken; namely, modesty, the admission of his mistakes.”The orator adduced two examples: the first, relating to the boycott of the State Duma in 1905; the second, relating to the method and the date for the October insurrection. Let us quote literally Stalin’s story of this second “mistake” of Lenin:

“In 1917, in July, under Kerensky, at the moment the Democratic Conference was convoked and when the Menshe viks and the Social Revolutionaries were building up the new institution – the Pre-Parliament which was to have set the rails for a switch to the Constituent Assembly – now, at that very moment it was decided among ourselves in the Central Committee to go forward on the road of reenforcing the Soviets; convene the Congress of the Soviets; launch the insurrection and proclaim the Congress of the Soviets as the organ of state power. Ilyich, at the time in hiding, was not in agreement and wrote that this garbage [the Democratic Conference] must be dispersed and arrested. We understood that the matter was not quite so simple, knowing full well that the Conference consisted one-half or at least one-third of delegates from the front, and that by arresting and dis persing we could only spoil the whole business and worsen the relations with the front. All the gullies, pits and ravines in our path were more easily to be seen by us. But Ilyich is great [?] ; he is not afraid [?!] of either pits, hollows, or ravines in his path; he does not fear threats and says:

‘Begin and go straight ahead.’ But our faction saw that it was not to our advantage at the time to act in this way; thatitwas necessary to walk around these obstacles in order to take the bull by the horns. And despite all the demands of Ilyich, we proceeded along the road of ree~nforcement and came up [?] on October 25 before the picture of the insurrection. Ilyich, smiling, looking at us slyly, said: ‘Yes, you were right.’ This again astonished us. At times, Comrade Lenin, in questions of immense importance, admitted his failings [?] ...” (The Fiftieth Anniversary of V.I. Ulianov Lenin, 1920, 27ff.)

Stalin’s speech has not entered into any collection of his “works.” Yet it is instructive to the highest degree. In the first place, it leaves no stone unturned of the latter-day legend alleging that the Central Committee, under the leader ship of Lenin, smashed the “constitutional illusions” of Trotsky with regard to the date and the method of the insur rection. According to Stalin – according, that is, to the Stalin of 1920 – it follows, on the contrary, that upon this question the Central Committee supported Trotsky against Lenin.

In my recollections of Lenin published in 1924, I related how Lenin, when he arrived at the Smolny on the night of the 25th, said to me: “Well, well – it can be done that way too. Just take the power.”The “historian” Yaroslavsky in 1930 indignantly denied the authenticity of this story. For, you see, the overturn had been accomplished by the Central Committee in accord with Lenin – and against Trotsky; how then could Lenin have said: “It can be done that way too”? Yet, from Stalin we learn that the Central Committee “despite all the demands of Ilyich” pursued its line oriented upon the Congress of the Soviets and “came up on October 25 before the picture of the insurrection”; while Lenin on arriving at the Smolny announced: “Yes, you were right.” Is it possible to imagine a more convincing, even if involuntary, confirma tion of my story and a more crushing refutation of all the latter-day fictions?

Whoever reads carefully the chapters in my History treating of the disagreements in the party on the eve of the October overturn will without difficulty ascertain that Stalin in his speech depicts the divergence between the Central Committee and Lenin far more sharply than was done by me. And this for the very reason that the differences and controversies of that period found their reflection only partially and, moreover, indirectly in letters and other documents. In my presentation, I meticulously avoided personal recollections, unless I was unable to substantiate them through other sources. I was doubly cautious inasmuch as it was a question of a tactical disagreement with Lenin on which the subsequent course of events confirmed the correctness of my own position. I might point out that Stalin’s speech at the jubilee meeting of 1920 was not and could not have been contradicted by anybody there. If the speech, in conformity with the general mental equipment of the orator, tends to simplify the question, then it all the more weightily refutes that version which was concocted with the participation of Stalin during the most recent period.