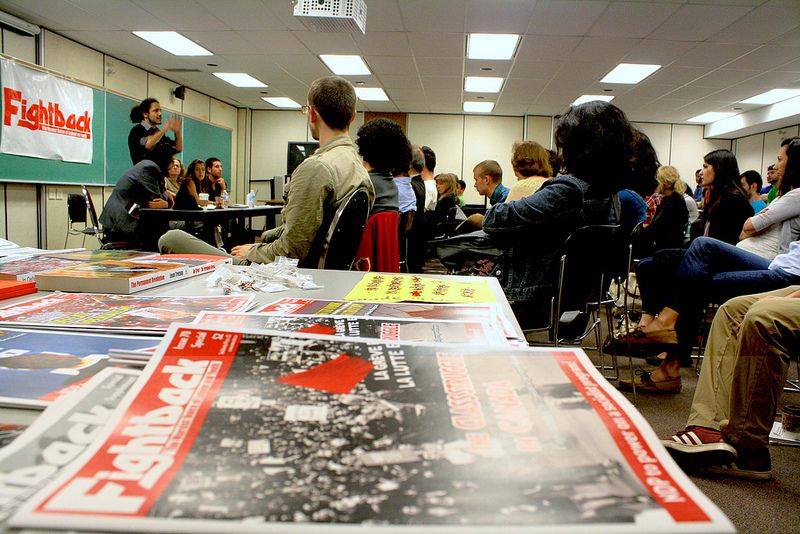 More than 90 people packed a room at the University of Toronto on Friday, 14th June to engage in a public discussion and presentation on revolutionary perspectives and first-hand accounts of the mass movement in Turkey. The event was organized by Fightback and the “Canada Student Collective in Solidarity with Protesters in Turkey”. The event was language-friendly, as those feeling comfortable to speak in Turkish had the option of translation offered to them by the organizers present. An open environment was established for people of all political backgrounds and opinions to engage in what would turn out to be a productive, comradely, and ongoing analysis of the mass movement in Turkey.

The event started with a presentation by speakers Ezgi Dogru, Aziz Güzel, and Guliz Akkaymak, all of whom are student activists from Turkey, as well as Farshad Azadian who spoke on behalf of Fightback. The growing appeal of revolutionary ideas was very apparent both in the presentations of the four panelists, as well as through the broader audience participation in the discussion period afterwards.

Ezgi elaborated on the nature of neoliberal capitalist development under the Justice and Development Party (AKP) regime of Erdogan that had been based on financial speculation, enormous development projects, and privatization. This had significant effects on access to public space and inequality. She highlighted how Turkey had more journalists imprisoned than in any other country.

Aziz Güzel, who had just returned from Turkey, gave a first-hand experience of being immersed in the uprising over the past few weeks. From his experiences in Taksim Square, Aziz highlighted the atrocities committed by the Erdugan regime against the peaceful protesters. Detailing the heroics of the men, women, and children on the streets, he explained the variety of ideologies present at the demonstrations. However, he also made an important point, that while it was clear that the common ideology and slogans of the movement were progressive and often anti-capitalist, the movement itself needed leadership. He said that “what is missing is [a] leadership” that could effectively mobilize the millions of workers and people of all backgrounds in the country against reaction and an unjust political system. 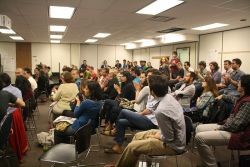 Farshad Azadian began by putting the Turkish movement in its world political context. He said that the movement in Turkey must be looked at in the context of the revolutionary wave across the Middle East, the mass movements and general strikes across Europe, and examples creeping up from every corner of the world. This is further proof that the vast interconnection of revolt and uprisings are rooted in the fact that capitalism cannot solve the basic problems of the majority of people.  Farshad went on to explain how Turkey was once considered to be one of the countries immune to the financial crisis that began in 2008, largely due to its rapid pace of growth. He pointed out, however, that class inequality had grown enormously during this period of growth, and that over the past year, the economic forecast has become very grim as Turkey has slowed-down tremendously as the effects of the crisis in Europe and the Middle-East are felt.

In discussing advancing the struggle forward, Farshad insisted on the need to bring the broadest layers of the working class into the movement. Although the movement was not directly caused by the economic crisis, it certainly contributed enormously to the broader dissatisfaction of the people with the political and economic structures in place.  He pointed out how there was an excellent two-day general strike organized by the smaller trade unions on the 4th and 5th of June. This was an excellent first step, but it must advance to an indefinite general strike to bring down Erdogan, and that would also involve the participation of the ranks of the major Confederation of Turkish Trade Unions (TÜRK-İŞ). He said there is a “vital need for leadership and program that could unite the masses”, and that without tangible and radical demands the movement could die down. But with leadership and a program committed to overthrowing the ruling regime and of uniting the working class across national lines, the movement would advance rapidly. 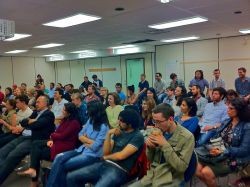 During the open discussion there was no lack of passionate and informative interventions from the crowd. One man stood up to express his joy at seeing so many young people present at the event, saying, “Where were you folks when I was in my twenties!” He went on to explain the need for vigilance, pointing to the tactics of the state and authorities to stifle the movement, giving the example of Toronto during the G20.  Another woman stood up and expressed the need for optimism as there is no room for pessimism during a period of heightened revolutionary fervour. She went on to say the priority should be honest and productive discussions around ideas such as leadership and tactics to push the movement forward as millions of people in Turkey are waiting for genuine guidance.  A supporter of Fightback, proudly stood up to recognize himself as a Kurdish descendant, speaking on the tensions between Kurds and nationalists in the country. He told the crowd that this mass movement in Turkey that had erupted in the past few weeks had indeed brought together people from all political, ethnic and religious backgrounds together against one common enemy, the Erdugan regime and the capitalist system that is oppressing average people.

After the event the hallways outside the hall crowded as participants in the event, the Turkish student panellists and the activists of Fightback eagerly continued the discussions. The enthusiastic exchange of ideas was continued to a pub nearby as dozens continued to share perspectives and opinions throughout the night.

The vibrant discussions and the number of people in attendance portrayed the commitment of Fightback to organize in solidarity with various groups during an international event at a moment’s notice. It is also further proof of the thirst for revolutionary ideas and the enthusiasm that is growing in Canada as a result of the movements that are erupting across the world and which provide inspiration.  There has never been a better time to be a revolutionary, and we should never forget that the best help we can give our brothers and sisters who are sacrificing everything to transform society in Turkey and elsewhere, is to bring that same fight to the centres of imperialism.

For more pictures from the event, check out our Flickr page.