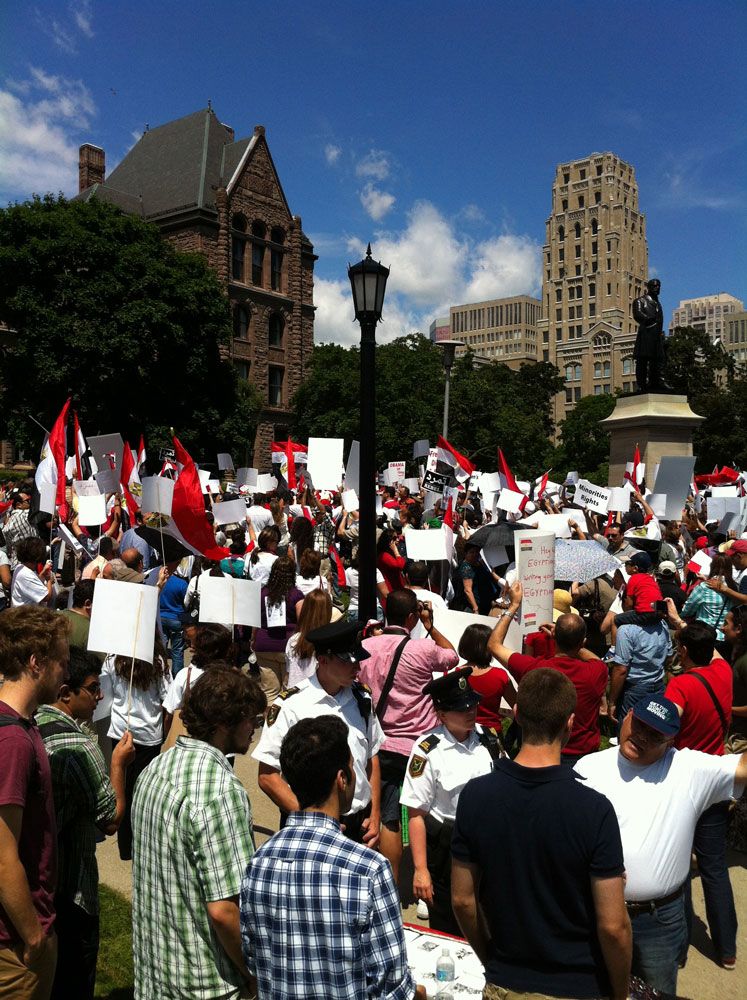 On Sunday, 30th June, approximately 400 demonstrators came together at Queen’s Park in Toronto to rally in solidarity with mass protests in Egypt against President Morsi of the Muslim Brotherhood. Hostility towards Morsi was apparent at the rally, as chants and signs depicted the deep resentment that Egyptians have for the current government.

June 30 marks the first-year anniversary of the presidency of Morsi. His first year in power was not greeted by the Egyptian people with admiration but rather by the largest demonstration in the history of Egypt and the entire Middle East. Estimates have been made that some 15 to 30-million participants took part in the mass demonstrations that stormed the streets demanding the resignation of Morsi and the Muslim Brotherhood government.

However this should not have come as surprise to those following events in Egypt over the past months. The Tamarod (“Rebel”) campaign had been able to sign approximately 22-million signatures demanding Morsi’s resignation. Demonstrators at Queen’s Park emulated the animosity of their fellow countrymen towards Morsi as they rallied nonstop for several hours, holding signs with slogans such as "freedom for women", "traitor", and with chants calling for Morsi to "gather your brotherhood and leave". The atmosphere at the rally was very unified. The attendees were mainly Egyptian attendees, though quite a few curious passersby stopped to view the demonstration.

The activists of Fightback gained a very warm reception at the demonstration. We made our way around the crowd sparking conversation with the young and old alike. As soon as we set up a literature stall, people flocked to the table and looked through our literature. In particular there was significant interest in the Arab-language Marxist publication, Freedom and Communism (www.marxy.com), and protesters who were deeply interested in discussion on the future of Egypt purchased many copies of it along with issues of Fightback magazine.

However, there was significant nationalist sentiment among the crowd including illusions that the army generals could play a positive role. For many, there was a lack of familiarity with the ideas of socialism but many were more than happy to speak on a socialist alternative in Egypt. As socialists, we are committed to supporting the heroic struggles of the Egyptian masses. Every committed revolutionary must follow how the situation unfolds in the coming days, including the certain maneuvers that the ruling elite and imperialism will try to make as to pacify this powerful movements in the streets.

In the coming weeks, Fightback will be holding an event to discuss the ongoing events in Egypt and the need for a socialist alternative that would genuinely advance the interests of the workers, farmers, women, and youth of Egypt. To the brave Egyptian protesters, we stand In solidarity with you! “Thawra hatta’l nasr! Revolution until victory!"